The Kingdom of Hungary (Hungarian: Magyar Királyság) also known as the Regency, existed from 1920 to 1946 and was a de facto country under Regent Miklós Horthy. Horthy officially represented the abdicated Hungarian monarchy of Charles IV, Apostolic King of Hungary. Attempts by Charles IV to return to the throne were prevented by threats of war from neighbouring countries and by the lack of support from Horthy (see the conflict of Charles IV with Miklós Horthy).

The Kingdom of Hungary under Horthy was an Axis Power during most of World War II. In 1944, Hungary was occupied by Nazi Germany, and Horthy was deposed. The Arrow Cross Party's leader Ferenc Szálasi established a new Nazi-backed government, effectively turning Hungary into a German puppet state. During the late spring and summer, the Germans forced the roundup and deportation of hundreds of thousands of Hungarian Jews to their extermination camps, where most died.

After World War II, Hungary fell within the Soviet Union's sphere of interest. In 1946, the Second Hungarian Republic was established under Soviet control.

Main articles: Aftermath of World War I, Union of Transylvania with Romania, Red Terror (Hungary), and Hungarian-Romanian War of 1919

Upon the dissolution and break-up of Austria-Hungary after World War I, the Hungarian Democratic Republic and then the Hungarian Soviet Republic were briefly proclaimed in 1918 and 1919, respectively. The short-lived communist government of Béla Kun launched what was known as the "Red Terror", involving Hungary in an ill-fated war with Romania. In 1920, the country fell into a period of civil conflict, with Hungarian anti-communists and monarchists violently purging the nation of communists, leftist intellectuals, and others whom they felt threatened by, especially Jews. This period was known as the "White Terror". In 1920, after the pullout of the last of the Romanian occupation forces, the Kingdom of Hungary was restored. 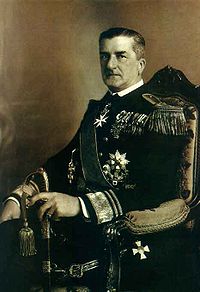 Miklós Horthy, the Regent of Hungary.

On March 1, 1920, a coalition of right-wing political forces united and returned Hungary to being a Constitutional Monarchy. Selection of the new King of Hungary was delayed due to civil infighting. It was decided to select a Regent to represent the monarchy and former Austro-Hungarian Navy Admiral Miklós Horthy was chosen for this position. Sándor Simonyi-Semadam was the first Prime Minister of Horthy's Regency.

Horthy's rule as Regent possessed characteristics such that it could be construed a dictatorship. As a counterpoint, his powers were a continuation of the constitutional powers of the King of Hungary, adopted earlier during the Hungary federation with the Austrian Empire.[2] As Regent, Horthy had the power to adjourn or dissolve the Hungarian Parliament at his own discretion; he appointed the Hungarian Prime Minister.[3]

During his first ten years, Horthy led increased repression of Hungarian minorities, placed limits on the number of Jews permitted to go to university, and legalized corporal punishment. Under the leadership of Prime Minister István Bethlen democracy dissipated, as Bethlen manipulated elections in rural areas. His political party, the Party of Unity, won repeated elections. Bethlen pushed for revision of the Treaty of Trianon. After the collapse of the Hungarian economy from 1929 to 1931, national turmoil pushed Bethlen to resign as Prime Minister.

Social conditions in the kingdom did not improve as time passed, as extremely small percentages of the population controlling much of the country’s wealth. Jews were continually pressured to assimilate into Hungarian mainstream culture.

The desperate situation forced Regent Horthy to accept far-right politician Gyula Gömbös as Prime Minister. He pledged to retain the existing political system. Gömbös agreed to abandon his extreme anti-Semitism and allow some Jews into the government.

In power, Gömbös moved Hungary towards a one-party government like those of Fascist Italy and Nazi Germany. Pressure by Nazi Germany for extreme anti-Semitism forced Gömbös out and Hungary pursued anti-Semitism under its “Jewish Laws”. Initially, the government passed laws restricting Jews to 20 percent in a number of professions. Later it scapegoated the Jews for the country’s failing economy.

In 1944, responding to the advancing Soviet forces, Regent Miklos Horthy deposed the last fascist Prime Minister and installed an anti-Fascist regime in an effort to join the Allies and avoid occupation by the Soviet Union. Shortly afterward, German forces invaded Hungary, deposed Horthy as Regent, and installed a puppet regime led by Ferenc Szálasi of the anti-Semitic and pro-Nazi Arrow Cross Party. The Arrow Cross Party never abolished the Monarchy as a form of government, as Hungarian newspapers kept referring to the country as the Kingdom of Hungary (Magyar Királyság), although Magyarország (Hungary) was used as an alternative.[4][5] From May to June 1944, Hungarian authorities rapidly rounded up and transported hundreds of thousands of Hungarian Jews to Nazi concentration camps, where most died.

After the fall of the Szálasi regime, Béla Miklós's Soviet-backed government was left nominally in control of the entire country. The High National Council, appointed in January to assume the Regency, included members of the Hungarian Communist Party, like Ernő Gerő, and later Mátyás Rákosi and László Rajk.

Upon the kingdom's establishment soon after World War I, the country suffered from economic decline, budget deficits, and high inflation as a result of the loss of economically important territories under the Treaty of Trianon.[6] The land losses of the Treaty of Trianon in 1920 caused Hungary to lose agricultural and industrial areas, making it dependent on exporting products from what agricultural land it had left to maintain its economy. Prime Minister István Bethlen's government dealt with the economic crisis by seeking large foreign loans, which allowed the country achieve monetary stabilization in the early 1920s. He introduced a new currency in 1925, the pengő.[7] Industrial and farm production rose rapidly, and the country benefited from flourishing foreign trade during most of the 1920s.[6]

Following the start of the Great Depression in 1929, previous economic prosperity collapsed in the country, especially in part due to the economic effects of the failure of the Österreichische Creditanstalt bank in Vienna, Austria.[8] From the mid-1930s to the 1940s, with relations improved with Germany, Hungary’s economy benefited from trade. The Hungarian economy became dependent on that of Germany to sustain itself. 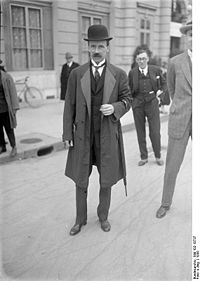 Initially, despite a move towards nationalism, the new state under Regent Horthy in an effort to prevent further immediate conflicts signed the Treaty of Trianon on June 4, 1920, thereby reducing Hungary’s size substantially: Transylvania was taken by Romania; Slovakia became part of Czechoslovakia; Vojvodina joined the Kingdom of Serbs, Croats, and Slovenes (Yugoslavia after 1929); and the Free State of Fiume was created.

With the succession of increasingly nationalist and far-right Prime Ministers, Hungary steadily came to oppose the Treaty of Trianon, and aligned itself with Europe's two fascist states, Germany and Italy, which both opposed the changes to national borders in Europe at the end of World War I. Italian Fascist dictator Benito Mussolini sought closer ties with Hungary, beginning with the signing of a treaty of friendship between Hungary and Italy on April 5, 1927.[9] Gyula Gömbös was an open admirer of the fascist leaders.[10] Gömbös attempted to forge closer trilateral unity between Germany, Italy and Hungary by acting as an intermediary between Germany and Italy whose two fascist regimes had nearly come to conflict in 1934 over the issue of Austrian independence. Gömbös eventually persuaded Mussolini to accept Hitler's annexation of Austria in the late 1930s.[9] Gömbös is said to have coined the phrase "axis", which he applied to his intention to create an alliance with Germany and Italy; those two countries used it to term their alliance as the Rome-Berlin axis.[10] Just prior to the Second World War, Hungary benefited from its close ties with Germany when it was allowed to annex parts of former Slovak territories and Carpatho-Ukraine from Czechoslovakia. This agreement was the first of the Vienna Awards.

Main articles: Hungary during World War II, Administrative divisions of the Kingdom of Hungary (1941-44), and Government of National Unity (Hungary)

In 1940, the Kingdom of Hungary joined the Axis powers and demanded the concession of Transylvanian territory from Romania. German Führer Adolf Hitler and the Nazi regime helped Hungary receive significant portions of Transylvania while avoiding a war with Romania. Hitler demanded that the Hungarian government follow Germany’s military and racial agenda to avoid potential conflict in the future. Anti-Semitism was already an established political cause by the far-right in Hungary. The Hungarian government readily aided Nazi Germany in the deportation of hundreds of thousands of Jews to concentration camps in 1944 during the Holocaust.

In April 1941, Hungary joined Germany and Italy in the invasion of Yugoslavia. Hungary was allowed to annex the Bačka (Bácska) region in Vojvodina, which had a Hungarian relative majority, as well as the regions of Prekmurje and Medjimurje, which had large Slovenian and Croatian majorities, respectively. Its ambitions regarding Croatia were halted by the creation of the Independent State of Croatia and Nazi Germany’s alliance with the Kingdom of Romania against the Soviet Union.

On 27 June 1941, Hungary declared war against the Soviet Union. Fearing a potential turn of support to the Romanians, the Hungarian government sent armed forces to support the German war effort during Operation Barbarossa. This support cost the Hungarians dearly. The entire Hungarian Second Army was lost during the Battle of Stalingrad. 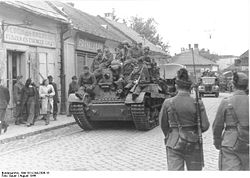 By early 1944, with Soviet forces fast advancing from the east, Hungary was caught attempting to contact the British and the Americans to secretly switch sides. On 19 March 1944, the Germans responded by invading Hungary in Operation Margarethe. German forces occupied key locations to ensure Hungarian loyalty. Horthy was placed under house arrest and replaced Prime Minister Miklós Kállay with a more pliable successor. Döme Sztójay, an avid supporter of the Nazis, became the new Hungarian Prime Minister. Sztójay governed with the aid of a Nazi Military Governor, Edmund Veesenmayer.

By October of the same year, the Hungarians were caught trying to switch sides, and the Germans launched Operation Panzerfaust. Horthy was replaced with Arrow Cross leader Ferenc Szálasi. A new pro-German "Government of National Unity" was proclaimed, and continued the war on the side of the Axis. Szálasi did not replace Horthy as Regent, but instead became the "Nationleader" (Nemzetvezető) and Prime Minister of the new Hungarian Fascist regime.

On 21 December 1944, a Hungarian "Interim Assembly" met in Debrecen with the approval of the Soviet Union. This assembly elected an interim counter-government headed by Bela Miklos, the former commander of the Hungarian First Army. Szálasi's regime was driven out of Hungary at the end of March 1945.[11]

Under Soviet occupation and provisional governments, the fate of the Kingdom of Hungary was already determined. A High National Council was appointed the country's collective Head of State until the monarchy was formally dissolved in 1946. The Regency was replaced by the Second Hungarian Republic. It was quickly followed by the creation the People's Republic of Hungary.