Peter III (21 February 1728 – 17 July [O.S. 6 July] 1762) (Russian: Пётр III Фëдорович, Pyotr III Fyodorovich) was Emperor of Russia for six months in 1762. He was very pro-Prussian, which made him an unpopular leader. He was supposedly assassinated as a result of a conspiracy led by his wife, who succeeded him to the throne as Catherine II.

When his aunt, Anna's younger sister Elizabeth, became Empress of Russia she brought Peter from Germany to Russia and proclaimed him her heir-presumptive in the autumn of 1742. Previously in 1742, the 14-year-old Peter was proclaimed King of Finland during the Russo-Swedish War (1741–1743), when Russian troops held Finland. This proclamation was based on his succession rights to territories held by his childless granduncle, the late Charles XII of Sweden who also had been Grand Duke of Finland. About the same time, in October 1742, he was chosen by the Swedish parliament to become heir-presumptive to the Swedish throne. However, the Swedish parliament was unaware of the fact that he had also been proclaimed heir-presumptive to the throne of Russia, and when their envoy arrived in Saint Petersburg in November, it was too late. It has been reported that the underage Peter's succession rights to Sweden were renounced on his behalf.

Empress Elizabeth arranged for Peter to marry his second cousin, Sophia Augusta Frederica (later Catherine the Great), daughter of Christian August, Prince of Anhalt-Zerbst and Johanna Elisabeth of Holstein-Gottorp. The young princess formally converted to Russian Orthodoxy and took the name Ekaterina Alexeievna (i.e., Catherine). They married on August 21, 1745. The marriage was not a happy one, but produced one son: the future Emperor Paul; and one daughter: Anna Petrovna (20 December 1757 – 19 March 1759). Catherine later claimed that Paul was not fathered by Peter, that, in fact, they had never consummated the marriage.[1] During the sixteen years of their residence in Oranienbaum Catherine took numerous lovers, as did her husband. 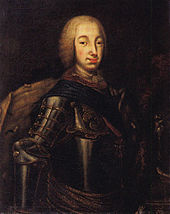 The classical view of Peter's character is mainly drawn out of his wife's and usurper's memoirs. She described him as an “idiot”, “drunkard from Holstein”, “good-for-nothing” etc. This portrait of Peter can be found in most history books, including 1911 Encyclopaedia Britannica:

Nature had made him mean, the smallpox had made him hideous, and his degraded habits made him loathsome. And Peter had all the sentiments of the worst kind of small German prince of the time. He had the conviction that his princeship entitled him to disregard decency and the feelings of others. He planned brutal practical jokes, in which blows had always a share. His most manly taste did not rise above the kind of military interest which has been defined as "corporal's mania," the passion for uniforms, pipeclay, buttons, the "tricks of parade and the froth of discipline." He detested the Russians, and surrounded himself with Holsteiners.

There have been many attempts to revise the traditional characterisation of Peter and his policies. The Russian historian A.S. Mylnikov gives us a very different view of Peter III:

Many contradictory qualities existed in him: keen observation, zeal and sharp wit in his arguments and actions, incaution and lack of perspicuity in conversation, frankness, goodness, sarcasm, a hot temper, and wrathfulness.[2]

The German historian Elena Palmer goes even further, portraying Peter III as a cultured, open-minded emperor who tried to introduce various courageous, even democratic reforms in the 18th century’s Russia. Currently, a newly established union is working on a project to build a memorial for Peter III in Kiel (North Germany), his city of birth.[citation needed]

After Peter gained the throne in 1762, he withdrew from the Seven Years' War and made peace with Prussia (the "Miracle of the House of Brandenburg"). He gave up Russian conquests in Prussia and offered 12,000 troops to make an alliance with Frederick II, which relieved Russia financially. Russia was switched from an enemy of Prussia to an ally — Russian troops were withdrawn from Berlin and sent against the Austrians.[3] This dramatically shifted the balance of power in Europe — suddenly handing Frederick the initiative, who recaptured southern Silesia and forced Austria to the negotiating table.

Being a Duke of Holstein-Gottorp, Peter planned war against Denmark in order to restore Schleswig to his Duchy. He focused on making alliances with Sweden and England to ensure that they would not interfere on Denmark’s behalf, while forces were concentrated at Kolberg in Russian occupied Pomerania. Alarmed at the troop concentrations occurring at their borders, unable to find any allies to resist Russian aggression, and short of finance to fund a war, the government of Denmark threatened the free city of Hamburg in northern Germany with invasion in late June to force a loan from it. Peter considered this a casus belli, and prepared for open warfare against Denmark.[4]:220

In June 1762, 40,000 Russian troops were assembled in Pomerania under General Pyotr Rumyantsev. They were preparing to face 27,000 Danish troops under the French general Count St. Germain in case the Russian-Denmark freedom conference, scheduled for July 1, 1762 in Berlin under the patronage of Frederick II, failed to resolve the issue. But, shortly before this Peter was dethroned and the conference did not happen. The problem with Schleswig remained unsolved. Peter was accused of planning an unpatriotic war.[5]

While historically Peter's planned war against Denmark was seen as being a political failure, recent scholarship has portrayed it as part of a pragmatic plan to expand Russian power westwards —he saw gaining territory and influence in Denmark and Northern Germany as more useful to Russia than taking East Prussia.[4]:218–20 Equally, he saw that friendship towards Prussia and Britain, following its triumph in the Seven Years War, could offer more to aid his plans than either Austria or France. 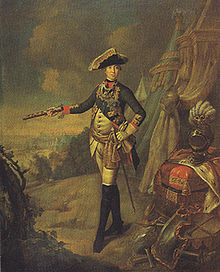 During his 186-day period of government, Peter III passed 220 new laws which he had developed and elaborated during his life as a crown prince. Elena Palmer claims that his reforms were of a democratic nature.[6] He proclaimed religious freedom[citation needed] — in those times a revolutionary step, that not even the advanced Western Europe had taken thus far. He fought corruption within government, established public litigation and abolished the secret police — a repressive organ started under Peter I and intended to expose it as betrayer of the state for its mercilessness and torture methods.[6] Catherine recreated this institution and it remained present in Russia under various names until it was replaced by the KGB.[6] He established[citation needed] obligatory education for aristocrats[clarification needed] — all aristocrats had to provide their children with education and report it to the senate. Furthermore, in some cities technical schools were established for middle and lower class children.[5] Peter began the reorganization[clarification needed] and modernization of the Russian army.[7]

One of his most popular reforms was the manifesto of February 1762 that exempted the nobility from obligatory state and military service (established by Peter the Great) and gave them freedom to travel abroad. On the day Peter submitted this manifesto, the parliament proposed building a pure gold statue of him, but Peter refused, saying that there must be much better uses for gold in the country.[5]

Peter III’s economic policy reflected the rising influence of Western capitalism and the merchant class or “Third Estate” that accompanied it. He established the first state bank in Russia, rejected the nobility’s monopoly on trade and encouraged mercantilism by increasing grain exports and forbidding the import of sugar and other materials that could be found in Russia [8]

Peter's short reign also addressed the serfdom. For the first time, the killing of a peasant by a landowner became an act punishable by law.[5][6] State peasants were given higher social status than estate peasants, and many peasants under the servitude of the church were transferred to state lands. Peter also took further interest in church affairs, implementing his grandfather’s plan to secularize church and monastic lands.

The reign of Peter the Third is cast by Palmer as progressive[6] for its focus on transforming economically developed feudal Russia to a more advanced European state. Palmer claims that his reform efforts were welcomed by society as a whole.[6] It is Palmer's further contention that a plot against him by members of the government and influential nobles is unjustified:[6] that the aristocratic names in the list of conspirators belonged to Guards officers, those who had lost influence and impoverished families who had no access to high government positions and were forced into service, some resentment within the Guard could not have led to a change of government. A revolt of the Guards regiments against the emperor, to whom they had sworn allegiance, could only lead to an alternative emperor. Palmer claims that the conspiracy against Peter III was carried out by Catherine and Guards officer Orlov and was in fact nothing more than a murder for personal reasons.[6] With the aid of the two Guards troops that Peter had planned to discipline more harshly, the emperor was arrested and forced to abdicate on June 28. Shortly thereafter, he was transported to Ropsha where he was supposedly assassinated.

In December 1796, after succeeding Catherine, Peter's son the Emperor Paul, who disliked his mother, arranged for his remains to be exhumed and then reburied with full honors in the Peter and Paul Cathedral, where other tsars were buried.

After his death, four fake Peters (five if Šćepan Mali of Montenegro is included) came forth, supported by revolts among the people[9] who believed in a rumor that Peter had not died, but had secretly been imprisoned by Catherine. The most famous was the Cossack peasant Pugachev. Under this guise, he led what came to be known as Pugachev's Rebellion in 1774, ultimately crushed by Catherine's forces.

The legend of Peter is still talked about, especially in the town where he lived most of his life, former Oranienbaum, later Lomonosov, situated on the southern coast of the Gulf of Finland, 40 km west of St. Petersburg. Peter’s palace is the only one of the famous palaces in the St. Petersburg area that was not captured by the Germans during Second World War. During the war, the building was a school and people say the ghost of Peter protected the children of Oranienbaum from getting hurt by bombs. Furthermore, it was near this town that the siege of Leningrad ended in January 1944. People say that Peter, after his death, stopped Hitler’s army near Leningrad, as the living Peter stopped the Russian army near Berlin.[5][6]

Peter has been depicted on screen a number of times, almost always in films concerning his wife Catherine. He was portrayed by Douglas Fairbanks, Jr. in the 1934 film The Rise of Catherine the Great and by Sam Jaffe in The Scarlet Empress the same year. In 1991 Reece Dinsdale portrayed him in the television series Young Catherine. La Tempesta (1958) depicts Yemelyan Pugachev's effort to force his recognition as Peter III and offers a critical view of Catherine the Great, with Van Heflin in the role of Pugachev and Viveca Lindfors as Catherine.