The AIVD focuses mostly on domestic non-military threats to Dutch National security, whereas the Military Intelligence and Security Service (MIVD) focuses on international threats, specifically military and government-sponsored threats such as espionage. The AIVD, unlike its predecessor BVD, is charged with collecting intelligence and assisting in combating both domestic and foreign threats to national security.

Since the murder of Theo van Gogh and the discovery of the Hofstad Network, AIVD has re focused on the Islamic Fundamentalist threat to Dutch society. 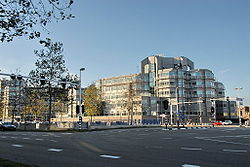 The minister of internal affairs (and relations within the realm) is politically responsible for the AIVD's actions. Oversight is provided by the Intelligence Committee of the House of Representatives, comprising the speakers for the parties in the House.

The AIVD publishes an annual report which includes its budget. The published version contains redactions where information is deemed sensitive.

Its main activities include;

Its methods and authorities include

The latter is technically the same as sourcing intelligence from a foreign intelligence service; this method has not been confirmed.

The AIVD operates in tight concert with the Regional Intelligence Service (Regionale Inlichtingen Dienst, RID), to which members of the police are appointed in every police district. It also co-operates with over one hundred intelligence services. Given the small size of the Netherlands, the latter co-operation is not likely to be symmetrical.

The service has been criticized for

During the Cold War the BVD had a reputation for interviewing potential employers of persons they deemed suspicious for any reason, thereby worrying corporations on the employment of these persons. Reasons for being suspect included leftist ideals, membership of the Dutch Communist Party or a spotty military record (such as being a conscientious objector with regard to conscription), although no evidence of the latter has ever been produced.[2]

Before 2001, the Netherlands had the largest absolute number of wiretaps in the world.

The service's focus on leftist activism is legendary[citation needed]; leftist activists exhibit great measures of paranoia relating to the service's activities, whether real or imaginary.[citation needed] This focus on leftist, rather than right-wing or Islamic organizations is a legacy from the Cold War and historical threats posed by RaRa, the Red Army Faction and such. Some substance was lent to such paranoia by the confirmation that the Marxist-Leninist Party of the Netherlands was a fake organization set up and entirely controlled by the security service.

It is likely that the AIVD has significant influence in police and prosecution circles, given recent cases where suspected terrorists were prosecuted (and found not guilty) or successfully extradited (Mullah Krekar) without credible non-secret evidence.

Today the AIVD is believed to be one of the most effective secret services of Europe, although there is little known about the AIVD.