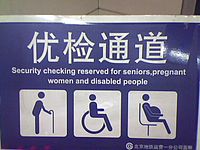 Chinglish refers to spoken or written English language that is influenced by the Chinese language.[1] The term "Chinglish" is commonly applied to ungrammatical or nonsensical English in Chinese contexts, and may have pejorative or deprecating connotations,[2] reflecting the attitudes of those who apply the label.[3] Other terms used to describe the phenomenon include "Chinese English", "China English", and "Sinicized English".[4] The degree to which a Chinese variety of English exists or can be considered legitimate is disputed.[5]

The Oxford English Dictionary defines the noun and adjective.

Chinglish, n. and a. colloq. (freq. depreciative). Brit. /ˈtʃɪŋglɪʃ/, U.S. /ˈtʃɪŋ(g)lɪʃ/. Forms: 19– Chinglish, 19– Chenglish [rare]. [Blend of Chinese n. and English n. Compare earlier Japlish n., Spanglish n. Compare also Hinglish n.2, Singlish n.2] A. n. A mixture of Chinese and English; esp. a variety of English used by speakers of Chinese or in a bilingual Chinese and English context, typically incorporating some Chinese vocabulary or constructions, or English terms specific to a Chinese context. Also: the vocabulary of, or an individual word from, such a variety. Cf. Singlish n.2 B adj. Of or relating to Chinglish; expressed in Chinglish.[6]

This dictionary cites the earliest recorded usage of Chinglish (noted as a jocular term) in 1957 and of Chinese English in 1857.[7]

Chinglish commonly refers to a mixture of English with Modern Standard Mandarin, but it occasionally refers to mixtures with Cantonese,[8] Shanghainese and Taiwanese Hokkien.[9]

Chinglish contrasts with some related terms. Chinese Pidgin English was a lingua franca that originated in the seventeenth century. Chinese-Ordered English and English-Ordered Chinese are pedagogical techniques for teaching Chinese as a second language. Zhonglish, a term for Chinese influenced by English, is a portmanteau from Zhongwen 中文 "Chinese language" and English. "[10][11][12]

One author divides Chinglish into "instrumental" and "ornamental" categories. "Instrumental Chinglish is actually intended to convey information to English speakers. Ornamental Chinglish is born of the fact that English is the lingua franca of coolness. Meaning aside, any combination of roman letters elevates a commodity – khaki pants, toilet paper, potato chips – to a higher plane of chic by suggesting that the product is geared toward an international audience."[15]

English first arrived in China in 1637, when British traders reached Macao and Guangzhou (or Canton).[16] In the 17th century, Chinese Pidgin English originated as a lingua franca for trade between British people and mostly Cantonese-speaking Chinese people. This proto-Chinglish term "pidgin" originated as a Chinese mispronunciation of the English word "business".[17] Following the First and Second Opium War between 1839–1842, Pidgin English spread north to Shanghai and other treaty ports.[18] Pidgin usage began to decline in the late 19th century when Chinese and missionary schools began teaching Standard English.[19] In 1982, the People's Republic of China made English the main foreign language in education.[20] Current estimates for the number English learners in China range from 300 to 500 million.[21]

Chinglish may have influenced some English expressions that are "calques" or "loan translations" from Chinese Pidgin English, for instance, "lose face" derives from diulian 丟臉 "lose face; be humiliated." Some sources claim "long time no see" is a Chinglish calque from hǎojiǔbújiàn 好久不見 "long time no see".[22][23] More reliable references note this jocular American English phrase "used as a greeting after prolonged separation" was first recorded in 1900 for a Native American's speech, and thus more likely derives from American Indian Pidgin English.[24][25]

Chinese officials carried out campaigns to reduce Chinglish in preparation for the 2008 Summer Olympics in Beijing and the Expo 2010 in Shanghai.

Soon after the International Olympic Committee selected Beijing in 2001, the Beijing Tourism Bureau established a tipster hotline for Chinglish errors on signs, such as emergency exits at the Beijing airport reading "No entry on peacetime".[26] In 2007, the Beijing Speaks Foreign Languages Program (BSFLP) reported they had, "worked out 4,624 pieces of standard English translations to substitute the Chinglish ones on signs around the city", for instance, "Be careful, road slippery" instead of "To take notice of safe: The slippery are very crafty." BSFLP chairperson Chen Lin said, "We want everything to be correct. Grammar, words, culture, everything. Beijing will have thousands of visitors coming. We don't want anyone laughing at us."[27] Reporting from Beijing, Ben Macintyre lamented the loss of signs like "Show Mercy to the Slender Grass" because, "many of the best examples of Chinglish are delightful, reflecting the inventiveness that results when two such different languages collide".[28] The Global Language Monitor doubted that Beijing's attempt to eradicate Chinglish could succeed; noting that "we share the charm and joy of the Olympic Games" is found on the official website of the Beijing Olympics.[29] "Hundreds of scholars have proofed the site and decided that the word charm is most appropriate in describing the Games."[30]

In Shanghai, for Expo 2010, a similar effort was made to replace Chinglish signage. A New York Times article by Andrew Jacobs, source for the "Execution in Progress" sign above,[31] reported on accomplishments by the Shanghai Commission for the Management of Language Use. "Fortified by an army of 600 volunteers and a politburo of adroit English speakers, the commission has fixed more than 10,000 public signs (farewell “Teliot” and “urine district”), rewritten English-language historical placards and helped hundreds of restaurants recast offerings." [32] James Fallows attributed many Shanghai Chinglish errors to "rote reliance on dictionaries or translation software", citing a bilingual sign reading "餐厅 Translate server error" (canting 餐厅 means "dining room; restaurant"). Conceding, "there's something undeniably Colonel Blimp-ish in making fun of the locals for their flawed command of your own mother tongue"; Fallows observed a Shanghai museum with "Three Georges Dam" banners advertising a Three Gorges Dam exhibit, and wrote, "it truly is bizarre that so many organizations in China are willing to chisel English translations into stone, paint them on signs, print them on business cards, and expose them permanently to the world without making any effort to check whether they are right."[33] On a Chinese airplane, Fallows was given a wet wipe labeled "Wet turban needless wash", translating mianxi shijin (免洗湿巾 lit. "wash-free moist towel").[34] Shanghai's Luwan District published a controversial "Bilingual Instruction of Luwan District for Expo" phrasebook with English terms and Chinese characters approximating pronunciation: "Good morning! (古的猫宁)" [pronounced gu de mao ning] and "I'm sorry (俺么搔瑞)" [an men sao rui].[35]

Chinglish is pervasive in present-day China "on public notices in parks and at tourist sites, on shop names and in their slogans, in product advertisements and on packages, in hotel names and literature, in restaurant names and on menus, at airports, railway stations and in taxis, on street and highway signs – even in official tourist literature."[36]

The future of Chinglish is uncertain. The Global Language Monitor predicts it will thrive, and estimates that roughly 20 percent of new English words derive from Chinglish, for instance, shanzhai (山寨; literally "mountain stronghold; mountain village") meaning "counterfeit consumer goods; things done in parody"[37][38] — Huang Youyi, president of the China Internet Information Center, predicts that linguistic purism could be damaged by popular Chinese words of English origin (such as OK and LOL). "If we do not pay attention and we do not take measures to stop Chinese mingling with English, Chinese will no longer be a pure language in a couple of years."[39]

Specifying Chinglish to mean "Chinese words literally translated into English", an experiment in linguistic clarity found that mathematical terms are more readily understandable in Chinglish than English.[40] English words for mathematics typically have Greek and Latin roots, while corresponding Chinese words are usually translations of neologisms from Western languages; thus quadrilateral (from Latin quadri- "four" and latus "sided") is generally less informative than Chinese sibianxing 四邊形 (literally, "four-side-shape"). For example, compare the semantic clarity of English axiom, Chinese gongli 公理, and Chinglish (literal translation) "universal-principle"; median, zhongshu 中数, and "center-number"; or trapezoid, tixing 梯形, and "ladder-figure". The study involved three groups of mathematics teachers who rated the clarity of 71 common mathematical terms. Group 1 with native speakers of Chinese judged 61% of the Chinese terms as clear; Group 2 with native speakers of English judged 45% of the English terms as clear. Group 3 with English-speaking teachers (both native and nonnative speakers) judged the comparative clarity of English and Chinglish word pairs: more clear for 42.3% of the Chinglish and 5.6% of the English, equally clear for 25.4% of the Chinglish-English pairs, and neither clear for 19.7%.

On October 11, 2011, a Broadway play written by David Henry Hwang named Chinglish, which deals heavily with the themes of Chinese and American (mis)communication, began performances at the Longacre Theatre.[41] 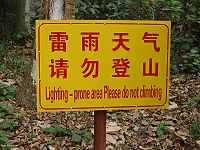 A warning sign in Guilin misspells "Lightning" and mistranslates "Please do not climb" with "climbing".

Chinglish reflects the influence of Chinese syntax and grammar.[44] For instance, Chinese verbs are not necessarily conjugated and there is no equivalent article for English "the", both of which can create awkward translations.

Chinglish has various causes, most commonly erroneous Chinese dictionaries and translation software (mentioned above by Fallows).

Liu et al. differentiate root and ancillary causes of Chinglish. The root causes are outdated Chinese-English dictionaries and incorrect English as a foreign language textbooks. Ancillary causes include misspelling, mediocre English-language teaching, sloppy translation, and reliance on outdated translation technology. They warn that, "today's English-language publishers and teachers in China are passing on obsolete translations and incorrect rules of language to students. In turn, Chinglish gets duplicated across society, particularly now during today's period of rapid opening to the outside world and the widespread use of English. The resultant flood of Chinglish will perpetuate unless it is corrected now."[45]

Collections of Chinglish are found on numerous websites (see below) and books.[46][47][48] Owing to the ubiquity of Chinglish mistakes throughout the Sinosphere, the following examples will exclude common misspellings (e.g., "energetically Englsih-friendly environment")[49] and typographical errors (a bilingual bus sign reading "往 不知道 To unknow"; wang 往 means "to; toward" and buzhidao 不知道 "don't know")[50] that can occur anywhere in the English-speaking world. 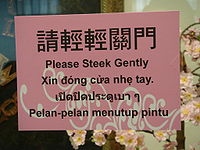 A multilingual sign on a door uses the rare word steek "shut" instead of close.