An article (abbreviated art) is a word that combines with a noun to indicate the type of reference being made by the noun. Articles specify the grammatical definiteness of the noun, in some languages extending to volume or numerical scope. The articles in the English language are the and a/an, and (in some contexts) some. 'An' and 'a' are modern forms of the Old English 'an', which in Anglian dialects was the number 'one' (compare 'on', in Saxon dialects) and survived into Modern Scots as the number 'ane'. Both 'on' (respelled 'one' by the Normans) and 'an' survived into Modern English, with 'one' used as the number and 'an' ('a', before nouns that begin with a consonant sound) as an indefinite article.

In languages that employ articles, every common noun, with some exceptions, is expressed with a certain definiteness (e.g., definite or indefinite), just as many languages express every noun with a certain grammatical number (e.g., singular or plural). Every noun must be accompanied by the article, if any, corresponding to its definiteness, and the lack of an article (considered a zero article) itself specifies a certain definiteness. This is in contrast to other adjectives and determiners, which are typically optional. This obligatory nature of articles makes them among the most common words in many languages—in English, for example, the most frequent word is the.[1]

Articles are usually characterized as either definite or indefinite.[2] A few languages with well-developed systems of articles may distinguish additional subtypes.

Within each type, languages may have various forms of each article, according to grammatical attributes such as gender, number, or case, or according to adjacent sounds.

The sentence above refers to specific children and a specific way home; it contrasts with the much more general observation that:

The latter sentence refers to children in general, perhaps all or most of them.

Give me the book

refers to a specific book whose identity is known or obvious to the listener; as such it has a markedly different meaning from

Give me a book

which does not specify what book is to be given.

The definite article can also be used in English to indicate a specific class among other classes:

The cabbage white butterfly lays its eggs on members of the Brassica genus.

An indefinite article indicates that its noun is not a particular one (or ones) identifiable to the listener. It may be something that the speaker is mentioning for the first time, or its precise identity may be irrelevant or hypothetical, or the speaker may be making a general statement about any such thing. English uses a/an, from the Old English forms of the number 'one', as its primary indefinite article. The form an is used before words that begin with a vowel sound (even if spelled with an initial consonant, as in an hour), and a before words that begin with a consonant sound (even if spelled with a vowel, as in a European).

She had a house so large that an elephant would get lost without a map.

Before some words beginning with a pronounced (not silent) h in an unstressed first syllable, such as hallucination, hilarious, historic(al), horrendous, and horrific, some (especially older) British writers prefer to use an over a (an historical event, etc.).[3] An is also preferred before hotel by some writers of British English (probably reflecting the relatively recent adoption of the word from French, where the h is not pronounced).[4] The use of "an" before words beginning with an unstressed "h" is more common generally in British English than American.[4] American writers normally use a in all these cases, although there are occasional uses of an historic(al) in American English.[5] According to the New Oxford Dictionary of English, such use is increasingly rare in British English too.[3] Unlike British English, American English typically uses an before herb, since the h in this word is silent for most Americans.

The word some is used as a functional plural of a/an. "An apple" never means more than one apple. "Give me some apples" indicates more than one is desired but without specifying a quantity. This finds comparison in Spanish, where the singular indefinite article 'uno/una' ("one") is completely indistinguishable from the unit number, except where it has a plural form ('unos/unas'): Dame una manzana" ("Give me an apple") > "Dame unas manzanas" ("Give me some apples"). However, some also serves as a quantifier rather than as a plural article, as in "There are some apples there, but not many."

French: Voulez-vous du café ?
Do you want (some) coffee? (or, dialectally but more accurately, Do you want some of this coffee?)

Haida has a partitive article (suffixed -gyaa) referring to "part of something or... to one or more objects of a given group or category," e.g. tluugyaa uu hal tlaahlaang 'he is making a boat (a member of the category of boats).'[6]

A negative article specifies none of its noun, and can thus be regarded as neither definite nor indefinite. On the other hand, some consider such a word to be a simple determiner rather than an article. In English, this function is fulfilled by no, which can appear before a singular or plural noun:

No man is an island.
No dogs are allowed here.

The zero article is the absence of an article. In languages having a definite article, the lack of an article specifically indicates that the noun is indefinite. Linguists interested in X-bar theory causally link zero articles to nouns lacking a determiner.[7] In English, the zero article rather than the indefinite is used with plurals and mass nouns, although the word "some" can be used as an indefinite plural article.

Visitors end up walking in mud. 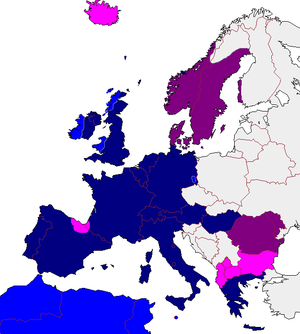 Articles are found in many Indo-European and Semitic languages but are absent from some other large languages of the world, such as Chinese, Indonesian, Japanese, Hindi and Russian.

In many languages, the form of the article may vary according to the gender, number, or case of its noun. In some languages the article may be the only indication of the case, e.g., German Der Hut des Napoleon, "Napoleon's hat". Many languages do not use articles at all, and may use other ways of indicating old versus new information, such as topic–comment constructions.

In the above examples, the article always precedes its noun (with the exception of the Arabic tanween and the Hebrew ה [ha-]). In some languages, however, the definite article is not always a separate word, but may be postfixed, attached to the end of its noun as a suffix. For example,

Articles have developed independently in many different language families across the globe. Generally, articles develop over time usually by specialization of certain adjectives.

Joseph Greenberg Universals of human language[8] describes "the cycle of the definite article": Definite articles (Stage I) evolve from demonstratives, and in turn can become generic articles (Stage II) that may be used in both definite and indefinite contexts, and later merely noun markers (Stage III) that are part of nouns other than proper names and more recent borrowings. Eventually articles may evolve anew from demonstratives.

The English definite article the, written þe in Middle English, derives from an Old English demonstrative, which, according to gender, was written se (masculine), seo (feminine) (þe and þeo in the Northumbrian dialect), or þæt (neuter). The neuter form þæt also gave rise to the modern demonstrative that. The ye occasionally seen in pseudo-archaic usage such as "Ye Olde Englishe Tea Shoppe" is actually a form of þe, where the letter thorn (þ) came to be written as a y.

Multiple demonstratives can give rise to multiple definite articles. Macedonian, for example, in which the articles are suffixed, has столот (stolot), the chair; столов (stolov), this chair; and столон (stolon), that chair. Colognian prepositions articles such as in dat Auto, or et Auto, the car; the first being specifically selected, focussed, newly introduced, while the latter ist not selected, unfocussed, already known, general, or generic.

The English indefinite article an is derived from the same root as one. The -n came to be dropped before consonants, giving rise to the shortened form a. The existence of both forms has led to many cases of juncture loss, e.g. transforming the original a napron into the modern an apron.