An example of Engrish in Sasebo, Japan 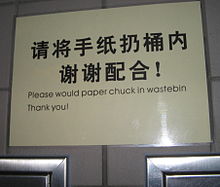 Engrish (イングリッシュ?) refers to unusual forms of English language usage by native speakers of some East Asian languages. The term itself relates to Japanese speakers' tendency to inadvertently substitute the English phonemes "R" and "L" for one another, because the Japanese language has one alveolar consonant in place for both. The related term "wasei-eigo" refers to pseudo-anglicisms that have entered into everyday Japanese.

While the term may refer to spoken English, it is more often used to describe written English. Engrish can be found in many places, including signs, menus, and advertisements. Terms such as Japanglish, Japlish or Janglish for Japan, Konglish for Korea, and Chinglish for China are more specific terms for Engrish.

Roots of the phenomenon

In Japanese Engrish, there are two contributing factors:

Engrish features prominently in Japanese pop culture. Many popular Japanese songs and television-show themes feature disjointed phrases in English amongst the otherwise Japanese lyrics. Japanese marketing firms helped create this popularity, resulting in an enormous array of advertisements, products, and clothing marked with English phrases that seem amusing or bizarre to those proficient in English. These new Engrish terms are generally short-lived, as they are used more for fashion than meaning.

Instances of Engrish due to poor translation were frequently found in many early video games produced in Japan. One well-known and popular example of Engrish in pop culture is the video game translation phenomenon "All your base are belong to us", which also became an Internet meme.

Engrish has featured occasionally in the cartoon South Park, such as the song "Let's Fighting Love", used in the episode "Good Times With Weapons", which parodies the poorly-translated opening theme sequences sometimes shown in anime, and in the feature length Team America: World Police where North Korean leader Kim Jong Il is depicted singing the song "I'm so Ronery".[6]