Kshatriya (Sanskrit: क्षत्रिय, kṣatriya from Sanskrit: क्षत्र, kṣatra) or Kashtriya, meaning warrior, is one of the four varnas (social orders) in Hinduism. Traditionally Kshatriya/Chattaris constitute the military and ruling elite of the Vedic-Hindu social system outlined by the Vedas and the Laws of Manu.

Sanskrit akṣatra, ruling; one of the ruling order member of the Kṣatriya caste[1] is the derivation for Old Persian xšaθra ("realm, power"), xšaθrya ("royal"), and xšāyaθiya ("emperor") are related to it, as are the New Persian words šāh ("emperor") and šahr ("city", "realm").[citation needed] Thai: กษัตริย์ (kasat), "king" or "monarch," and similar-sounding Malay kesatria or satria, "knight" or "warrior"[3], are also derived from it. The term may also denote aristocratic status.

Initially in ancient Vedic society, this position was achieved on the merits of a person's aptitude, conduct, and nature.[citation needed] The earliest Vedic literature listed by organization of function, not of caste, the Kshatriya (holders of kṣatra, or authority) as first in rank, and the Brahmins second (priests and teachers of law), before the Vaisya (Cattle-herders, merchant-traders, farmers and some artisan castes),[2] and the Sudra (labourers, some farming castes and other artisan castes).Manusmriti assigns cattle rearing as an occupation of Vaisya; however there are references in available literature that Kshatriyas also owned and reared the cattle and cattle-wealth was the mainstay of their households. Emperors of Kosala and Prince of Kasi are some of many examples.[2]

Movements of individuals and groups from one class to another, both upward and downward, were not uncommon; a rise in status even to the rank of Kshatriya was a recognized reward for outstanding service to the rulers of the day.[3][dubious – discuss] Over the years it became hereditary.[citation needed] In modern times, the Kshatriya varna includes a broad class of caste groups, differing considerably in status and function but united by their claims to ruler-ship, the pursuit of war, or the possession of land.[citation needed]

The legend that the Kshatriyas, with the exception of the Ikshvakus, were destroyed by Parasurama, the sixth reincarnation of Vishnu, as a punishment for their tyranny is thought by some scholars to reflect a long struggle for supremacy between priests and rulers that ended in victory for the former. By the end of the Vedic era, the Brahmins were supreme, and the Kshatriya had fallen to second place. Texts such as the Manusmṛti (a book of Hindu law) and most other dharmashastras (works of jurisprudence) report a Brahman victory, but epic texts often offer a different account, and it is likely that in social reality rulers have usually ranked first. The persistent representation of deities (especially Vishnu, Krishna, and Rama) as rulers underscores the point, as does the elaborate series of ritual roles and privileges pertaining to kings through most of Hindu history.[4][dubious – discuss]

According to Vedic theology , Manu is considered the law-giver and progenitor of humanity. He had over 50 sons. Manu was both king and priest and his children (and thus all of humanity) are considered highborn. Due to the eventual differences in occupations, people ended up in different jātis and castes. Those who studied the Vedas became known as Brahmins, those who practised trade became Vaishya, those who labored became Sudra, and those who took up martial arts became Kshatriyas.[citation needed]

According to popular myth/lore Rajputs/Thakurs came into being in 6th century AD through a of yagya done by Sage Agastya, though this might refer to Yagya done to provide regal legitimacy to certain warrior tribes. As Jats, assimilated many Surya, Chandra, Nag and Yaduvanshis into their being, same way Rajputs increased their vansh by assimilating same clans of Kshatriyas. Most Yaduvanshis became part of Jat and Rajput clans. For example, Bharatpur's Jat kingdom belong to Sri Krishna's Vrishni clan. Many Gurjar clans like Bhati got divided between Rajput, Jat and Muslims.[citation needed]

Most of the Gurjars (or Gujjars) believe to have descended from Suryavanshi Kshatriyas (Sun Dynasty) and connect themselves with Shri Ram Chandra.[5] Historically, the Gurjars were Sun-worshipers and are described as devoted to the Sun-god (God Surya). Their copper-plate grants bear an emblem of the Sun and on their seals, too, this symbol is depicted.[6] Also the Gurjar title of honor is Mihir which means Sun.[7][8]

There is confusion between Varna, Jati and Caste. While the term varna refers to the four broad different classes in society, the term jati refers to the different specific endogamous sections of the Hindu Society which are known as castes. Varna means "color" as well as "veil". It shows the four different ways in which the Divine Self is hidden in human beings. In the context of color people have confused it to mean race but it actually represents the distinct qualities (guna) that the four functional classes possess in their hearts and minds. The four different qualities of human beings:[citation needed]

The use of 'color' in this sense is metaphorical, however over time racialist interpretations, most notably the 'martial races' theory of the British Raj, gave way to the concept of 'heritable dharma', family castes, and the present divisions in Indian society.[citation needed]

Historians generally agree that caste became hereditary around the time of the rise of Buddhism and Jainism based on archaeological, literary, and artistic evidence of the communities that existed in India.[citation needed] Gautama Buddha and Mahavira are two Kshatriya sages who made a lasting impression on the world.[citation needed] They did not believe in the pre-eminence of the Vedas and taught to the masses, not keeping spirituality to an elite few.[citation needed] Ashoka Maurya became ardent follower of this faith and promoted it throughout the Mauryan empire. This resulted in the decline in status of the Brahman order.[citation needed]

Two camps exist about the importance of these texts. One camp is similar to the literalists of the Christian faith who believe that their holy texts are verbatim documentation of real people, events and dates and that modern society is descended from them.[citation needed] The other camp believes that the holy texts are not meant to be taken literally and should be used symbolically as examples of the proper way to live.[citation needed]

Those who believe the Mahabharata, Ramayana and Puranas were verbatim documents feel that modern Kshatriyas are descended from the Vedic Kshatriyas[citation needed]. The reason for the controversy is that we do not have any physical evidence of their existence. There are no bones, forts, weapons, coins, monuments, pictures etc. discovered to state unequivocally that they existed. However the clans as mentioned in Mahabharat for certain castes has existed as it is since time unknown, and provides the basis for belief in these texts.[citation needed]

The literalists believe that most of the Kshatriya communities descend from Surya, Chandra, or Agni. The Surya descendants claim descent from the Sun Dynasty (Suryavanshi). Rama also belonged to this dynasty, and the Suryavanshis, who trace this lineage via Rama's son, Luv) trace their linage back to him.[citation needed] The Chandra descendants claim descent from the Lunar Dynasty (Chandravansh). Krishna is believed to be born in this dynasty. Chandravanshi Kshtriyas consider him as an ancestor. This is mentioned in the Rig Veda and other Puranas as well as in Great epics, the Ramayana, the Mahabharata and the Raghuvaṃśa.[citation needed] 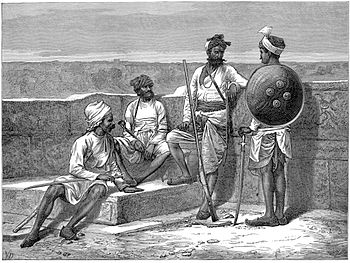 An 1876 engraving of Khokar Rajputs of Punjab from the Illustrated London News.

The situation has changed in modern times and Kshatriyas do not have much to gain or lose in status by their Kshatriya lineage. One area where the Kshatriya heritage has been prominent is the Indian Army.[9]

According to the 1891 Census of India, Martial Races made up more than 10% of the population of British India.[citation needed] This percentage might have decreased over the years. An example is that of the Nairs in Kerala who were decimated during the Mysore invasion of Kerala. Nairs constituted more than 30% of the population of Kerala during the 1854 census,[11] but decreased to 14.41% in 1968 and further decreased to 12.88% in 2000.[12][13][14] Frequent warfare was the main cause for demographic decline during early years, but low fertility is the main problem nowadays. (In Kerala, the Malayala Kshatriyas have a fertility of 1.47 children per woman, while the Muslims have 2.97 children per woman).[15]

The Rajputs were known to make deft political maneuvers to consolidate their kingdom or to defeat an enemy. They are also known to follow certain codes of war to fight a battle. They are recorded in history as a kind of fierce warrior clan who make brave attempts within their war codes to retrieve a lost kingdom or defeat a dangerous enemy.[citation needed] They are also legendarily said to have untiring persistence to attain their goal as in the case of Maharana Pratap.[citation needed] The rajputs are considered to be most revered and persistent Kshatriyas.[citation needed]

Praiseful references of might and administration of the Gurjars can be found in Arab records as well as Indian inscriptions.Kupadvanj inscription of 910A.D. mentions them as Roaring Gurjar.[16]Arab records say that the Gurjar king maintained numerous forces and no other Indian prince had so fine a cavalry.Arab invaders referred Gurjars as their greatest foe.[17]

The Maratha warrior and emperor Shivaji Bhonsale, born April, 1627 (also Shrimant Rajaram Shivaji Raje Bhonsle - Chhatrapati Maharaj) had his own army specialized in guerrilla warfare and a particular tale of valor is also a historical fact. It is the tale of Sinhagad Fort. Jats employed guerilla warfare in Bharatpur, which was very close to the stronghold of Mughals. They were able to fight successfully against Mughal ruler Aurangzeb 30 km from Agra.[citation needed]

South India, particularly Kerala also has its own share of Kshatriyans who are better known as members of Raja-Kudumba's or royal families. They practice the worlds oldest martial art known as Kalarippayattu. The Kalarippayattu has something commonly known as Marma Kalai or Varma Kalai where the Marmam is attacked which instantly disables or kills the enemy without making any externally visible injury.[citation needed]

Kshatriya Dharma is the rules to be followed by a Kshatriyan to do justice to his caste and status. it still exists in more logical and evolved forms.[citation needed]

Kshtariya Dharma is specifically described in the Mahabharata[18]:

"Have you never heard the Kshatriya Dharma: Stand straight and never bow down, for this alone is manliness. Rather break at the knots than bend!"

The flag of Mahl Kshatriyas.

In rituals, the Nyagrodha (Ficus Indica or India Fig/Banyan tree) danda, or staff, is assigned to the Kshatriya class, and along with a mantra, intended to impart physical vitality or 'ojas'.[19]

The Nyagrodha or Banyan tree, (not to be confused with the Pipul, Ficus Religiosus or Sacred Fig), with its hanging, branch-like root-trunks which can grow to several acres, is considered symbolically equivalent to the Kshtariya. Where the Nyragrodha is fastened to the ground and supported by its downward growths, the Kshatriya is thought of as supported by the larger society 'beneath' it.[citation needed]

In the Manu Smriti, or Laws of Manu, the Kshatriya caste is given the Varna (Color) red. 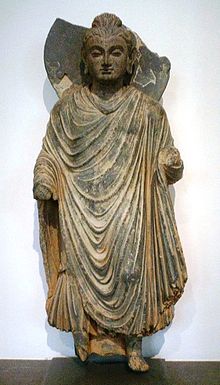 The Suryavanshi or Solar dynasty lineage claims descent from Surya. Suryavanshis also claim descent from Rama, who was himself born into a Suryavanshi dynasty. Kshatriya of Punjab, or Khatri as they are known in the Punjabi dialect hail from this dynasty. Out of the 36 major clans of Rajastani Rajputs, 10 belong to the Suryavanshi lineage (Shekhawat, Rathore, Sisodia, Kachwaha.etc.)[21]

The Nāgvanshi or Serpent dynasty is a sub-clan of Suryavanshi kshatriyas. They adopted Naga as their symbol and worshipped Lord Shiva in various forms. Nāgvanshis include most of the Nair[24][25] and Bunt clans as well as some Rajput (Saharan Rajputs,[26] Bais Rajputs, Naga Rajputs, Takshak Rajputs.[27] etc.) and Jat clans. The Nāgvanshi (or Nāgbanshi) are known for ruling Chhotanagpur.[28][29] Most important among the Jat clans which are of Nāga origin includes Bachak Jats,[citation needed] Kaliramna Jats,[citation needed] and Katewa Jats.[30][31] Outside India, the Balinese Kshatriyas[32][33][34] claim descent from Nāgvanshis. In South West India, the Naga Sendraka rulers of Nayarkhanda (Nagarkhanda) were feudatories to the Chalukyas.[35] The Sindas of Bastar were also of Nagavanshi origin.[36]