Chandra
This article is about the Hindu moon deity. For other uses, see Chandra (disambiguation).

In Hinduism, Chandra (Sanskrit चन्द्र lit. "shining")[1] is a lunar deity and a Graha. Chandra is also identified with the Vedic Lunar deity Soma (lit. "juice").[2] The Soma name refers particularly to the juice of sap in the plants and thus makes the Moon the lord of plants and vegetation.[1] He is described as young, beautiful, fair; two-armed and having in his hands a club and a lotus.[3] He rides his chariot (the moon) across the sky every night, pulled by ten white horses or an antelope. Although the antelope is the animal most commonly depicted with Him in iconography, the rabbit is also particularly sacred to him and all rabbits are under his protection.[4] He is connected with dew, and as such, is one of the gods of fertility. He is also called Rajanipati (lord of the night)[1] and Kshuparaka (one who illuminates the night),[5] Indu (lit. the bright drop).[1] As Soma he presides over Somvar or Monday.

He is the father of Budha, (planet Mercury) the mother being Tara (Taraka). He is married to 27 Nakshatras (constellations), who are known to be daughters of Daksha.

In Vedic astrology Chandra represents brain and mind, emotions, sensitivity, softness, imagination, queen and mother. Chandra rules over the sign Karka (Cancer), while he is exalted in Vrishabha (Taurus) and in his fall in Vrishchika (Scorpio). The waxing moon is considered to be benefic, and the waning moon is considered to be malefic. The bright moon is considered a benefic of the highest order, while the dark moon is considered a malefic. Chandra is lord of three nakshatras or lunar mansions: Rohini, Hasta and Shravana. Chandra has the following associations: the color white, the metal silver and the gemstones pearl and moonstone. His element is water, direction is north-west and season is winter. The food grain associated with him (one of Nava Dhanyas) is rice. 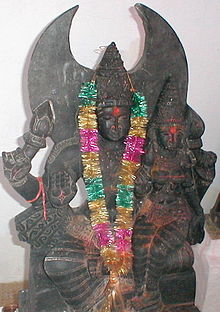 Chandra (pronounced either "CHUHN-drah") is a Sanskrit name meaning "illustrious." In Hindu mythology, Chandra is the god of the moon. In Hindu astrology, the moon is considered a planet, and it's considered to be one of the best planets to be born under as it promises wealth and happiness. It is also referred as Shashi(Kannada: ಶಶಿ) or Tingala(Kannada: ತಿಂಗಳ)

According to Hindu mythology Chandra has not been very fortunate in life. Chandra was born in the Ocean of Milk (the gods were churning it for millennia in order to create immortal life), and nearly blinded the gods with his bright, glowing body (hence the name that means "illustrious"). The gods unanimously decided to give Chandra the status of a planet and sent him into the cosmos.

Chandra is known for having a series of disastrous love affairs. His first lover, Tara, was the wife of Brihaspati, the planet Jupiter. From their union, Tara became pregnant with Budha (a.k.a. the planet Mercury, not to be confused with the other Buddha). Because of how he was conceived, Budha hated his father, and their rivalry continues to this day. After that, Chandra, set out to marry the twenty-seven daughters of Daksha. Daksha allowed this on the condition that the moon not favor any daughter over the others. Chandra failed to do this, and Daksha placed a curse on him that took away his luster, which accounts for the moon's waxing and waning.

Dark spot on the moon

One popular story to account for the dark spot on the moon is that Ganapati, once filled with food, fell from his mouse and broke his stomach. Chandra laughed at this, at which gaNesha injured him by breaking off and throwing one of his tusks; and cursed him so that it would be forbidden to behold Chandra on gaNesha-chaturthi.

Chandra is also the word in Sanskrit, Hindi and other Indian languages for moon. It is the middle name of the Hindu god Rama. This word is named after Nisha Chandra. Chandra Shekara literally refers to the 'Person who wears the moon' which links to Lord Shiva in Hindu Mythology. It is directed as both evil and good, as it could mean 'Queen of the Moon' or 'Demon of the moon'. It is also a common Indian name, both male(e.g.: Anurag Chandra) and female(e.g; Anusha/Amisha Chandra) and exists as a name in many South East Asian languages that originate from Sanskrit.

The god, the drink and the plant probably referred to the same entity, or at least the differentiation was ambiguous. In this aspect, Soma is similar to the Greek ambrosia (cognate to amrita); it is what the gods drink, and what made them deities. Soma is still coined as name for an entheogenic brew (avestic: Haoma) still in ceremonial use.

Indu, one of the other names for Chandra, is also the name of the first chakra (group) of Melakarta ragas in Carnatic music. The names of chakras are based on the numbers associated with each name. In this case, there is one moon and hence the first chakra is Indu.[6][7]

In India Chandra is a common surname. But in America the name has been used as a girl's name. It appeared on the popularity charts in the 1950s, peaking in the 1970s, before disappearing in the 1990s. The name has several variations including Chandrah, Chaundra, and Chondra.

Many Kshatriya clans in India associate them with Chandra and call it Chandra Vansh. This Chandra Vansh (lineage) has nothing to do with this deity or celestial Moon. The story as given in puranas says, Lord Brahma had manasaputra (sons born out of mind or adopted son) Kashyap, he had son Atri and Atri (Rishi) had a son, Soma. The lunar lineage begins from this son of Rishi Atri. It should be noted that Somvansh has nothing to do with the celestial Moon.

Chandra (and the gem supposedly on the forehead of a statue of his at Somanath) plays an important role in one of the first novel-length mystery stories in English, Moonstone.