Other web lists of algebraic structures, organized more or less alphabetically, include Jipsen and PlanetMath. These lists mention many structures not included below, and may present more information about some structures than is presented here.

An algebraic structure consists of one or two sets closed under some operations, functions, and relations, satisfying a number of axioms, including none. This definition of an algebraic structure should not be taken as restrictive. Anything that satisfies the axioms defining a structure is an instance of that structure, regardless of how many other axioms that instance happens to satisfy. For example, all groups are also semigroups and magmas.

Structures are listed below in approximate order of increasing complexity as follows:

If structure B is under structure A and more indented, then A is interpretable in B, meaning that all theorems of A are theorems of B. The converse is usually not the case.

A structure is trivial if the cardinality of S is less than 2, and is otherwise nontrivial.

An important result is that given any variety C and any underlying set X, the free object F(X)∈C exists.

See magma for a list of the many properties that a group-like structures may possess. The diagram to the right summarizes the defining properties of:

All group-like structures feature a primary (and often unique) binary or ternary operation, which usually (e.g., for semigroups and hoops) associates. This operation will nearly always be denoted here by concatenation, and when it is binary, will be called "group product." If group product associates, brackets are not required to resolve the order of operation. When group product does not associate (e.g., quasigroups, semiheaps, loops, implication algebras), an embedded period indicates the grouping. Examples: xy.z, x.yz.

For Steiner magmas, abelian groups, logic algebras, bands, equivalence algebras, and hoops, group product also commutes. Commutativity may be added to any group-like structure for which it is not already the case.

For monoids, loops, and sloops, S is a pointed set. 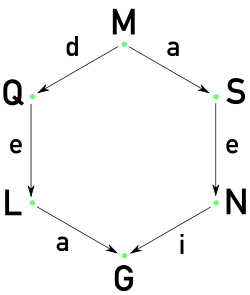 The binary operations meet and join, which characterize nearly all structures in this section, are idempotent, by assumption or proof. Latticoids are the only lattice-like structure that do not associate. N.B. "Lattice" is also employed in a number of group-theoretic contexts, including to refer to a discrete subgroup of the real vector space Rn that spans Rn.

Some concepts from order theory that recur in lattice theory:

One binary operation, one of meet or join, and denoted by concatenation. The two structures below are also magmas; see the preceding section.

. Converse and composition each distribute over join.[8]

The following Hasse diagram illustrates some pathways from a very general concept, partially ordered sets, to the oldest and most researched lattice, Boolean algebra. This diagram reveals some of the hierarchical structure linking a number of important types of lattices, not all discussed above because some are not varieties. This diagram consists of a number of links of the form A→B, each meaning that structure A is included in structure B. 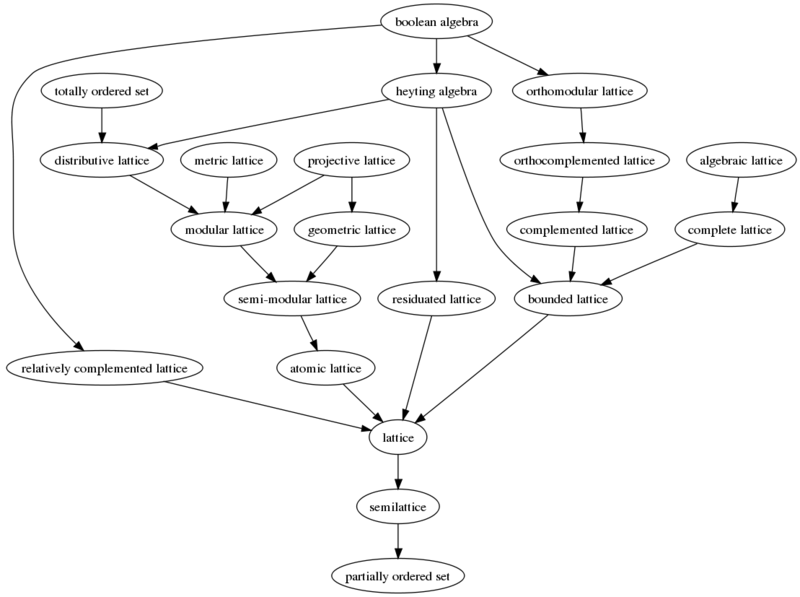 S includes distinguished elements and is closed under additional operations, so that the axioms for a semigroup, monoid, group, or a ring are satisfied.

N.B. The above definitions of rng, ring, and semiring do not command universal assent:

These structures feature a set R whose elements are scalars, denoted by Greek letters, and a set S whose members are denoted by Latin letters. For every ring R, there is a corresponding variety of R-modules.

A quasivariety is a variety with one or more axioms that are quasiidentities. Let Greek letters be metavariables denoting identities. A quasiidentity then takes the form (α1∧,...,∧αn) → β.

A magma (sometimes called "groupoid", or "algebra of type (2)") is a set equipped with a binary operation.

The elements of S are higher order functions, and concatenation denotes the binary operation of function composition.

One set, V a finite set of vertices, and a binary relation E⊆V2, adjacency, consisting of edges. No operations.

If the partial order relation ≤ is added to a structure other than a lattice, the result is a partially ordered structure. These are discussed in Birkhoff (1967: chpts. 13-15, 17) using a differing terminology. Examples include:

Nonvarieties cannot be axiomatized solely with identities and quasiidentities. Many nonidentities are of three very simple kinds:

Most of the classic results of universal algebra do not hold for nonvarieties. For example, neither the free field over any set nor the direct product of integral domains exists. Nevertheless, nonvarieties often retain an undoubted algebraic flavor.

There are whole classes of axiomatic formal systems not included in this section, e.g., logics, topological spaces, and this exclusion is in some sense arbitrary. Many of the nonvarieties below were included because of their intrinsic interest and importance, either by virtue of their foundational nature (Peano arithmetic), ubiquity (the real field), or richness (e.g., fields, normed vector spaces). Also, a great deal of theoretical physics can be recast using the nonvarieties called multilinear algebras.

No operations. Functions or relations may be present:

If the name of a structure in this section includes the word "arithmetic," the structure features one or both of the binary operations addition and multiplication. If both operations are included, the recursive identity defining multiplication usually links them. Arithmetics necessarily have infinite models.

In the structures below, addition and multiplication, if present, are recursively defined by means of an injective operation called successor, denoted by prefix σ. 0 is the axiomatic identity element for addition, and annihilates multiplication. Both axioms hold for semirings.

Arithmetics above this line are decidable. Those below are incompletable.

The following arithmetics lack a connection between addition and multiplication. They are the simplest arithmetics capable of expressing all primitive recursive functions.

Lattices that are not varieties

The following field-like structures are not varieties for reasons in addition to S≠{0}:

Vector spaces that are not varieties

The following composite structures are extensions of vector spaces that are not varieties. Two sets: M is a set of vectors and R is a set of scalars.

Structures that build on the notion of vector space:

Structures with topologies or manifolds

Let there be two classes:

Let x and y be any two elements of M. Then there exist:

Category: Composition associates (if defined), and x has left and right identity elements, the domain and codomain of x, respectively, so that d(x)x = x = xc(x). Letting φ stand for one of c or d, and γ stand for the other, then φ(γ(x)) = γ(x). If O has but one element, the associated category is a monoid.