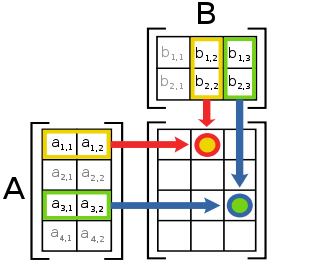 The values at the intersections marked with circles are:

In general, the matrix product is non-commutative. For example,

The element x3,4 of the above matrix product is computed as follows

The first coordinate in matrix notation denotes the row and the second the column; this order is used both in indexing and in giving the dimensions. The element

A company sells cement, chalk and plaster in bags weighing 25, 10, and 5 kg respectively. Four construction firms Arcen, Build, Construct and Demolish, buy these products from this company. The number of bags the clients buy in a specific year may be arranged in a 4×3-matrix A, with columns for the products and rows representing the clients:

We see for instance that A3,2 = 12, indicating that client Construct has bought 12 bags of chalk that year.

To find the total amount firm Arcen has spent that year, we calculate:

The total weight of the product bought by Arcen is calculated in a similar manner:

We can make similar calculations for the other clients. Together they form the matrix AB as the matrix product of the matrices A and B:

The matrix product is the most commonly used type of product of matrices. Matrices offer a concise way of representing linear transformations between vector spaces, and matrix multiplication corresponds to the composition of linear transformations. The matrix product of two matrices can be defined when their entries belong to the same ring, and hence can be added and multiplied, and, additionally, the number of the columns of the first matrix matches the number of the rows of the second matrix. The product of an m×p matrix A with a p×n matrix B is an m×n matrix denoted AB whose entries are

where 1 ≤ i ≤ m is the row index and 1 ≤ j ≤ n is the column index. This definition can be restated by postulating that the matrix product is left and right distributive and the matrix units are multiplied according to the following rule:

However, if A and B are both diagonal square matrices, and of the same order, then AB = BA.

provided that the expression in either side of each identity is defined.

where c is a scalar (for the second identity to hold, c must belong to the center of the ground ring — this condition is automatically satisfied if the ground ring is commutative, in particular, for matrices over a field).

If A and B are both nxn matrices with entries in a field then the determinant of their product is the product of their determinants:

In particular, the determinants of AB and BA coincide.

Let U, V, and W be vector spaces over the same field with certain bases, S: V → W and T: U → V be linear transformations and ST: U → W be their composition. Suppose that A, B, and C are the matrices of T, S, and ST with respect to the given bases. Then

Thus the matrix of the composition (or the product) of linear transformations is the product of their matrices with respect to the given bases.

Matrix multiplication can be extended to the case of several matrices, provided that their dimensions match, and it is associative (i.e. the result does not depend on the way the factors are grouped together) as long as their order is not changed. If A, B, C, and D are, respectively, m×p, p×q, q×r, and r×n matrices, then there are 5 ways of grouping them without changing their order, and

is an m×n matrix denoted ABCD.

where T denotes the matrix transpose.

The outer product is

Matrix multiplication can be viewed in terms of these two operations by considering the effect of the matrix product on block matrices:

The method in the introduction was:

This method emphasizes the effect of individual column/row pairs on the result, which is a useful point of view with e.g. covariance matrices, where each such pair corresponds to the effect of a single sample point. An example for a small matrix:

The running time of square matrix multiplication, if carried out naïvely, is O(n3). The running time for multiplying rectangular matrices (one m×p-matrix with one p×n-matrix) is O(mnp), however, more efficient algorithms exist, such as Strassen's algorithm, devised by Volker Strassen in 1969 and often referred to as "fast matrix multiplication". It is based on a way of multiplying two 2×2-matrices which requires only 7 multiplications (instead of the usual 8), at the expense of several additional addition and subtraction operations. Applying this recursively gives an algorithm with a multiplicative cost of

. Strassen's algorithm is more complex compared to the naïve algorithm, and it lacks numerical stability. Nevertheless, it is appears in several libraries, such as BLAS, where it is significantly more efficient for matrices with dimensions n > 100,[2] and is very useful for large matrices over exact domains such as finite fields, where numerical stability is not an issue.

The current O(nk) algorithm with the lowest known exponent k is the Coppersmith–Winograd algorithm. It was presented by Don Coppersmith and Shmuel Winograd in 1990, has an asymptotic complexity of O(n2.376). It is similar to Strassen's algorithm: a way is devised for multiplying two k×k-matrices with fewer than k3 multiplications, and this technique is applied recursively. However, the constant coefficient hidden by the Big O notation is so large that the Coppersmith–Winograd algorithm is only worthwhile for matrices that are too large to handle on present-day computers.[3]

Since any algorithm for multiplying two n×n-matrices has to process all 2×n2-entries, there is an asymptotic lower bound of Ω(n2) operations. Raz (2002) proves a lower bound of Ω(n2log n) for bounded coefficient arithmetic circuits over the real or complex numbers.

Cohn et al. (2003, 2005) put methods such as the Strassen and Coppersmith–Winograd algorithms in an entirely different group-theoretic context. They show that if families of wreath products of Abelian groups with symmetric groups satisfying certain conditions exist, then there are matrix multiplication algorithms with essentially quadratic complexity. Most researchers believe that this is indeed the case[4] – a lengthy attempt at proving this was undertaken by the late Jim Eve.[5]

Because of the nature of matrix operations and the layout of matrices in memory, it is typically possible to gain substantial performance gains through use of parallelization and vectorization. It should therefore be noted that some lower time-complexity algorithms on paper may have indirect time complexity costs on real machines.

The scalar multiplication of a matrix A = (aij) and a scalar r gives a product r A of the same size as A. The entries of r A are given by

When the underlying ring is commutative, for example, the real or complex number field, the two multiplications are the same. However, if the ring is not commutative, such as the quaternions, they may be different. For example

For two matrices of the same dimensions, we have the Hadamard product (named after French mathematician Jacques Hadamard), also known as the entrywise product and the Schur product.[6]

Formally, for two matrices of the same dimensions:

with elements given by

Note that the Hadamard product is a principal submatrix of the Kronecker product.

The Hadamard product is commutative, associative and distributive over addition.

For vectors x and y, and corresponding diagonal matrices Dx and Dy with these vectors as their leading diagonals, the following identity holds:[8]

where x * denotes the conjugate transpose of x. In particular, using vectors of ones, this shows that the sum of all elements in the Hadamard product is the trace of ABT.

A related result for square A and B, is that the row-sums of their Hadamard product are the diagonal elements of ABT:[9]

The Hadamard product appears in lossy compression algorithms such as JPEG.

The Frobenius inner product, sometimes denoted A:B is the component-wise inner product of two matrices as though they are vectors. In other words, it is the sum of the entries of the Hadamard product, that is,

Square matrices can be multiplied by themselves repeatedly in the same way that ordinary numbers can. This repeated multiplication can be described as a power of the matrix. Using the ordinary notion of matrix multiplication, the following identities hold for an n-by-n matrix A, a positive integer k, and a scalar c:

The naive computation of matrix powers is to multiply k times the matrix A to the result, starting with the identity matrix just like the scalar case. This can be improved using the binary representation of k, a method commonly used for scalars. An even better method is to use the eigenvalue decomposition of A.

Calculating high powers of matrices can be very time-consuming, but the complexity of the calculation can be dramatically decreased by using the Cayley–Hamilton theorem, which takes advantage of an identity found using the matrices' characteristic polynomial and gives a much more effective equation for Ak, which instead raises a scalar to the required power, rather than a matrix.

When raising an arbitrary matrix (not necessarily a diagonal matrix) to a power, it is often helpful to diagonalize the matrix first.