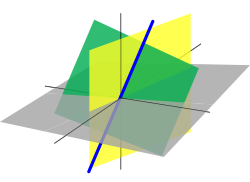 R3 is a vector (linear) space, and lines and planes passing through the origin are vector subspaces in R3. Subspaces are a common object of study in linear algebra.

Linear algebra is a branch of mathematics that studies vector spaces, also called linear spaces, along with linear functions that input one vector and output another. Such functions are called linear maps (or linear transformations or linear operators) and can be represented by matrices if a basis is given. Thus matrix theory is often considered as a part of linear algebra. Linear algebra is commonly restricted to the case of finite dimensional vector spaces, while the peculiarities of the infinite dimensional case are traditionally covered in linear functional analysis.

Linear algebra is central to modern mathematics and its applications. An elementary application of linear algebra is to find the solution of a system of linear equations in several unknowns. More advanced applications are ubiquitous in areas as diverse as abstract algebra and functional analysis. Linear algebra has a concrete representation in analytic geometry and is generalized in operator theory and in module theory. It has extensive applications in engineering, physics, natural sciences, computer science, and the social sciences (particularly in economics). Nonlinear mathematical models can often be approximated by linear ones.

The subject first took its modern form in the first half of the twentieth century. At this time, many ideas and methods of previous centuries were generalized as abstract algebra. Matrices and tensors were introduced in the latter part of the 19th century. The use of these objects in quantum mechanics, special relativity, and statistics did much to spread the subject of linear algebra beyond pure mathematics.

The origin of many of these ideas is discussed in the articles on determinants and Gaussian elimination.

The main structures of linear algebra are vector spaces and linear maps between them. A vector space is a set whose elements can be added together and multiplied by the scalars, or numbers. In many physical applications, the scalars are real numbers, R. More generally, the scalars may form any field F—thus one can consider vector spaces over the field Q of rational numbers, the field C of complex numbers, or a finite field Fq.

Elements of a general vector space V may be objects of any nature, for example, functions or polynomials, but when viewed as elements of V, they are frequently called vectors.

Given two vector spaces V and W over a field F, a linear transformation (or "linear map") is a map

that is compatible with addition and scalar multiplication:

Given a vector space V over a field F, an expression of the form

There is an important distinction between the coordinate n-space Rn and a general finite-dimensional vector space V. While Rn has a standard basis {e1, e2, …, en}, a vector space V typically does not come equipped with a basis and many different bases exist (although they all consist of the same number of elements equal to the dimension of V). Having a particular basis {v1, v2, …, vn} of V allows one to construct a coordinate system in V: the vector with coordinates (r1, r2, …, rn) is the linear combination

The condition that v1, v2, …, vn span V guarantees that each vector v can be assigned coordinates, whereas the linear independence of v1, v2, …, vn further assures that these coordinates are determined in a unique way (i.e. there is only one linear combination of the basis vectors that is equal to v). In this way, once a basis of a vector space V over F has been chosen, V may be identified with the coordinate n-space Fn. Under this identification, addition and scalar multiplication of vectors in V correspond to addition and scalar multiplication of their coordinate vectors in Fn. Furthermore, if V and W are an n-dimensional and m-dimensional vector space over F, and a basis of V and a basis of W have been fixed, then any linear transformation T: V → W may be encoded by an m × n matrix A with entries in the field F, called the matrix of T with respect to these bases. Therefore, by and large, the study of linear transformations, which were defined axiomatically, may be replaced by the study of matrices, which are concrete objects. This is a major technique in linear algebra.

Since linear algebra is a successful theory, its methods have been developed in other parts of mathematics. In module theory, one replaces the field of scalars by a ring. In multilinear algebra, one considers multivariable linear transformations, that is, mappings that are linear in each of a number of different variables. This line of inquiry naturally leads to the idea of the tensor product. Functional analysis mixes the methods of linear algebra with those of mathematical analysis.