"Ja, vi elsker dette landet" (help·info) (In English: "Yes, we love this country") is the national anthem of Norway. It is commonly referred to as just "Ja, vi elsker" ("Yes, we love"). The lyrics were written by Bjørnstjerne Bjørnson between 1859 and 1868, and the melody was written by his cousin Rikard Nordraak in 1864. It was first performed publicly on 17 May 1864 in connection with the 50th anniversary of the constitution. Usually only the first and the last two verses are sung.

Bjørnson wrote a modified version of the Dano-Norwegian language current in Norway at the time. Written Norwegian (bokmål) has since then been altered in a series of orthographic reforms intended to distinguish it from Danish and bring it closer to spoken Norwegian. The text below is a modernised version commonly used today, not identical to Bjørnson's original. The most commonly sung verses, 1, 7 and 8, have been modernised most.

The three commonly used stanzas of Ja, vi elsker were translated into English long ago. The name of the translator is seldom mentioned in printed versions of the English text. It has so far not been possible to identify the person responsible or to ascertain when it was translated. But the following versions of stanzas 1, 7, and 8 are well known and often sung by descendants of Norwegian immigrants to the United States. Its popularity and familiarity among Norwegian-Americans seems to indicate that it has been around for a long time, certainly since before the middle of the 20th century, and possibly much earlier. This translation may be regarded as the "official" version in English.

Yes, we love with fond devotion

This our land that looms

With her thousand homes.

Love her, in our love recalling

Those who gave us birth.

And old tales which night, in falling,

Brings as dreams to earth.

Thank thy God whose power

willed and wrought the land's salvation

In her darkest hour.

All our mothers sought with weeping

And our sires in fight,

God has fashioned in His keeping

Till we gained our right.

Yes, we love with fond devotion

This our land that looms

With her thousand homes.

And, as warrior sires have made her

At the call we too will aid her

Armed to guard her peace.

A verse hailing the then newly acceded monarch Carl XV (Karl IV of Norway) who had succeeded his father as king of Norway in July 1859 was included in the original version of "Ja, vi elsker". However, following the divisive international events of the spring of 1864 where the ideal of a unified Scandinavia was coldly shattered, Bjørnson went from being a monarchist to republicanism, and the tribute to the reigning sovereign was stricken from the song.

The lyrics that were taken out were:

In English this reads:

The King himself stands strong and open
As our border guard
and his most powerful weapon
is our brethren pact.

The "brethren pact" which the text is referring to was a military treaty between Norway, Sweden and Denmark to come to the assistance should one of the nations come under military assault. This happened when German troops invaded South Jutland in February 1864. None of the alliance partners came to the rescue of Denmark. This perceived treason of the "brethren pact" once and for all shattered many people's dreams of unification of the three countries.[1] 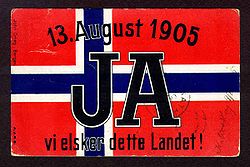 A postcard from around the time of the Norwegian union dissolution referendum, 1905.

In 1905 the Union between Sweden and Norway was dissolved after many years of Norwegian struggle for equality between the two states, as stipulated in the 1815 Act of Union. The unilateral declaration by the Norwegian Storting of the union's dissolution 7 June provoked strong Swedish reactions, bringing the two nations to the brink of war in the autumn. In Sweden, pro-war conservatives were opposed by the Social Democrats, whose leaders Hjalmar Branting and Zeth Höglund spoke out for reconciliation and a peaceful settlement with Norway. Swedish socialists sang Ja, vi elsker dette landet to demonstrate their support for the Norwegian people’s right to secede from the union.

During World War II, the anthem was used both by the Norwegian resistance and the Nazi collaborators, the latter group mainly for propaganda reasons. Eventually, the German occupiers officially forbade any use of the anthem.

In May 2006, the multicultural newspaper Utrop proposed that the national anthem be translated into Urdu, the native language of the most numerous group of recent immigrants to Norway.[2] The editor's idea was that people from other ethnic groups should be able to honour their adopted country with devotion, even if they were not fluent in Norwegian. This proposal was referred to by other more widely read papers, and a member of the Storting called the proposal "integration in reverse".[3] One proponent of translating the anthem received batches of hate-mail calling her a traitor and threatening her with decapitation.[4][dead link]