Tautiška giesmė (The National Hymn) is the national anthem of Lithuania, also known by its opening words "Lietuva, Tėvyne mūsų" (official translation of the lyrics:[1] "Lithuania, Our Homeland", literally: "Lithuania, Our Fatherland", ) and as "Lietuvos himnas" (Hymn of Lithuania). The music and lyrics were written in 1898 by Vincas Kudirka, when Lithuania was still a part of the Russian Empire. The fifty-word poem was a condensation of Kudirka's conceptions of the Lithuanian state, the Lithuanian people, and their past. Shortly after his death in 1899, the anthem was performed for Lithuanians living in Saint Petersburg, Russia.

The first public Lithuanian performance of the anthem took place in Vilnius in 1905, and it became the official national anthem in 1919, a year after Lithuania declared its independence. Following the annexation of Lithuania in 1940, by the Soviet Union, the anthem was forbidden to be played or sung in public.

"Tautiška giesmė" was reinstated as the national anthem in 1992, when the new Constitution was ratified after independence from the Soviet Union was achieved. The status of "Tautiška giesmė" as the National Anthem of Lithuania was further confirmed in 1999 with the passage of a national law stating that. 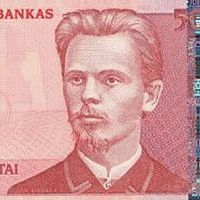 At the time when the poem Lietuva, Tėvyne mūsų was written, Lithuania was under the control of the Russian Empire. Kudirka, a medical student at the University of Warsaw, was writing as a columnist for the newspaper Varpas (The Bell). In his Varpas columns, Kudirka urged Lithuanians to take pride in their heritage, discussed the problems the Russian Government was causing the Lithuanian population, and denounced those who wished to work for the Tsarist autocracy. In the course of writing for Varpas, he wrote down his thoughts on what Lithuania was and what it should be, resulting in the fifty-word poem called Lietuva, Tėvynė mūsų (Lithuania, Our Homeland).[2]

The poem described the heroic past of Lithuania and exhorted its people to care for the land, care for humanity, and live in honor. Kudirka also urged the country to become a source of enlightenment and virtue. Without a melody, Kudirka took the time to compose the music just before dying of tuberculosis. Both the melody and the lyrics were printed in Varpas in September 1898. Upon his death in 1899, Kudirka's tomb was engraved with the second stanza of the anthem (later destroyed by the authorities).[3]

The building where the 1905 Seimas took place. It currently houses the National Philharmonic Society of Lithuania.

Shortly after Kudirka's death, the first performance of the poem occurred at a concert in St. Petersburg, Russia in 1899. The concert was conducted by Česlovas Sasnauskas and was attended by Lithuanians, which St. Petersburg had the largest population of at that time. The anthem was first performed in Lithuania during the Great Seimas of Vilnius on December 3, 1905.

When Lithuania declared its independence from Russia in 1918, the song was declared the national anthem.[4] It held this status until Lithuania was annexed into the Soviet Union during World War II.[5] During the interwar period, there had been suggestions to modify the words to include a reference to God. It was decided, in Kudirka's memory, that the lyrics should remain as he had written them.[6][7]

Immediately following the Soviet occupation of Lithuania, the Internationale replaced the Tautiška giesmė. Later an alternate anthem was created for the Lithuanian SSR, and instated in 1950. The music for that piece was composed by Balys Dvarionas and Jonas Švedas, and the words were written originally by Antanas Venclova. Following Stalin's death in 1953, its lyrics were modified by Vacys Reimeris to removing reference to the former dictator. This anthem stated that Lenin had lit the path to freedom, helped by the Russian people, and exhorted the Lithuanian people to work with peoples of the other Soviet Republics. The anthem was confirmed in Article 169 of the 1978 Constitution of the Lithuanian SSR.[8] The song continued to be used until Lithuania broke away from the Soviet Union. Already in 1988, the "Tautiška giesmė" was suggested as a replacement for the Soviet Lithuanian anthem. After preliminary approval by the Lithuanian SSR Supreme Soviet and successive legislative bodies, its status as the national anthem was reconfirmed in 1992.[9] In that year, the Constitution of Lithuania was approved; Article 19 of the document states that "Tautiška giesmė" will be the national anthem of Lithuania.[10] The last law in relation to the national anthem was passed in 1999; it contained the official lyrics and protocol on how and when to play the anthem.[11]

Signed into law by President Valdas Adamkus on June 9, 1999, the "Law on the National Anthem of the Republic of Lithuania" details when and where the national anthem is played and its performance protocols.[11]

Article 2 of the law states that the anthem is to be played at the following occasions: At the beginning or ending of solemn sessions of the Seimas, on national holidays and memorial days, and at receptions and farewells of foreign heads of state on official visits to Lithuania—but only after the anthem of the foreign country has been played.

It is played in foreign countries to represent Lithuania, according to their own diplomatic protocols; on national holidays and other days when the Flag of Lithuania is raised by order of the government; when the flag is raised during public events sponsored by governmental institutions, business, and organizations; and at the beginning and end of National Radio programming. The anthem may also be played at other occasions, such as sporting competitions.[11]

When playing the anthem, the music may be either live or recorded. The anthem may be performed with a choir, an orchestra, a military band, or a combination of the latter two. Article 4, section 2, states that all participants are encouraged to sing the national anthem. When the anthem is played, all civilians are asked to stand in a gesture of respect to the anthem. If employees of national defense, police, and other military or military-related organizations are present, they must respect the anthem in a way prescribed by their statutes. The anthem cannot be used as background music, purposes of advertisement, or for entertainment, such as karaoke. Public disrespect of the anthem may be punishable by law.[11]