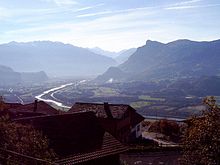 Oben am jungen Rhein (Up above the young Rhine), sung to the same tune as God Save the Queen, has been the national anthem of Liechtenstein since 1963, when the lyrics were altered (the first line had been Oben am deutschen Rhein).

The original lyrics had been written in 1850 by Swiss pastor Jakob Josef Jauch (1802–1859), in a time when the Principality of Liechtenstein, which is considered the last remnant of the Holy Roman Empire of the German Nation, was a member of the German Confederation. About a decade earlier, French claims to the left bank of the Rhine (Rhine Crisis of 1840) had triggered a series of German Rhine songs of which Die Wacht am Rhein is the most famous.

Jauch's lyrics were adopted in 1920 as national anthem. In 1963, the anthem was shortened, and references to German and Germany were removed: am deutschen Rhein (on the German Rhine) became am jungen Rhein (on the young Rhine), and im deutschen Vaterland (in the German fatherland) became das teure Vaterland (the precious fatherland). The second original stanza, containing Auf Deutschlands Wacht (on guard for Germany) was, like the third and fourth, discontinued altogether.