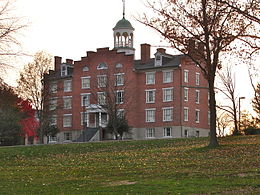 By 1819,[when?] a Pennsylvania Ministerium committee (Rev. John George Schmucker, D.D., Conrad Jaeger and H. A. Muhlenberg) began planning a Protestant seminary. After the board of directors first met on March 2, 1826; a selection group of 9 rejected proposals from Carlisle, Pennsylvania (at Dickinson College) and Hagerstown, Maryland;[5] and the "Gettysburg Theological Seminary"[6] was established on August 1, 1826.[7] Samuel Simon Schmucker was elected the first professor and the seminary opened with 11 students on September 5, 1826,[8] at the Gettysburg Academy building.[9]

The seminary was the site of Battle of Gettysburg, First Day, combat and had buildings burned during the battle.[5] On July 1 from ~4 p.m. until dark, the Third Richmond Howitzers (with "four 3 inch rifles") fired from the seminary onto Cemetery Hill and received counterfire[6] (Robert E. Lee's headquarters was north of the seminary). Seminary buildings became field hospitals (the last patient of the seminary's Old Dorm left on September 16, 1863),[10] and by 1896, the seminary had 2 academic buildings, 4 professor dwellings, a hospital, and about 38 acres (15 ha).[5]

The Gettysburg Park Commission telfordized the seminary's north-south avenue in 1895 (resurfaced in 1927) and had placed 2 Confederate 3" rifles, 2 other Confederate guns, and 2 Union 12 pounders along it by 1912.[11] The "Seminary Hotel" hosted dignitaries for the 50th battle anniversary[12]:49 (an Old Dorm colonial portico to commemorate the reunion was opened in May 1914,[7] but only the concrete base remains.)[8]

During the World War II labor shortage, the seminary assisted with the 1942 apple harvest[9] (German POWs were subsequently used), and a seminary auxiliary was organized in 1953.[10] In 1961, the Adams County Historical Society moved to the seminary's 1832 Old Dorm (added to the NRHP in 1974),[10] and the 2011 "Crossroads Campaign" planned $1.8 million of fundraising for chapel renovations.[11] 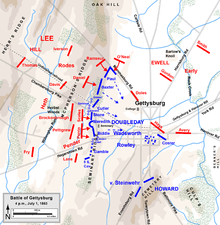