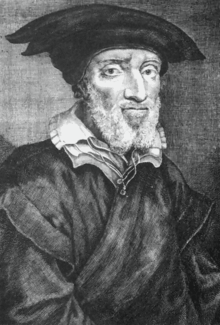 He was born in Carpano, a part of Albona (today Labin) in Istria, son of Andrea Vlacich alias Francovich and Jacobea Luciani, daughter of a wealthy and powerful Albonian family. His mother's uncle was the Lutheran Baldo Lupetina who later was condemned to death in Venice for his faith.

He lost his father during his early childhood. At the age of sixteen he went to study in Venice where he was taught by the humanist Giambattista Cipelli (Baptista Aegnatius / Battista Egnazio). At the age of seventeen, he intended to join a monastic order, with a view to sacred learning. His intention, however, was diverted by his uncle, Baldo Lupetina, provincial of the Franciscans and sympathetic to the Reformation cause, who convinced him to start a university career. He continued his studies in Basel in 1539, then went to Tübingen and finally ended up in Wittenberg where in (1541) he was welcomed by Melanchthon. There he came under the influence of Martin Luther. In 1544, Flacius was appointed professor of Hebrew at Wittenberg. In the following year he married a pastor's daughter.

Flacius finished his master's degree on 24 February 1546, ranking first among the graduates. Soon he was prominent in the theological discussions of the time, opposing strenuously the Augsburg Interim, and the compromise of Melanchthon known as the Leipzig Interim. Melanchthon wrote of him with venom as a renegade (aluimus in sinu serpentem, "we have nourished a snake in our bosom"). Because Wittenberg became too stressful, Flacius moved to Magdeburg in 1549. On 7 May 1557 he was appointed professor of New Testament theology at Jena but was soon involved in controversy with his colleague Victorinus Strigel on the synergistic question (relating to the function of the will in conversion).

Affirming the natural inability of man, he adopted a position on sin as not being an accident of human nature, but involved in its substance, since The Fall of Man. Holding to a strong view of what Calvinists later called total depravity, Flacius insisted that human nature was entirely transformed by original sin, human beings were transformed from goodness and almost wholly corrupted with evil, making them kin to the Devil in his view, so that within them, without divine assistance, there lies no power even to cooperate with the Gospel when they hear it preached. Human acts of piety are valueless in themselves, and humans are entirely dependent on the grace of God for salvation. Those that agreed with him on this point, for example, Cyriacus Spangenberg, were termed Flaccians. Resisting ecclesiastical censure, he left Jena (Feb. 1562) to found an academy at Regensburg.

That assignment was not successful, so in October 1566 he accepted a call from the Lutheran community at Antwerp. Thence he was driven (Feb. 1567) by the exigencies of war, and went to Frankfurt, where the authorities stood against him. He proceeded to Strasbourg where he was well received by the superintendent Johannes Marbach, and he hoped he had found an asylum. Here again, his religious views were unique and controversial. The authorities ordered him to leave the city by May Day 1573. The prioress Catharina von Meerfeld of the Convent of White Ladies secretly harboured him and his family in Frankfurt where he fell ill and died on 11 March 1575. 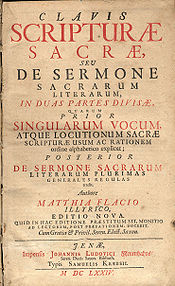 His life was indeed remarkable. His polemics have usually been passed over as distasteful by church historians; however he stands at the beginning of the scientific study of church history, and — if we except, a great exception, the work of Laurentius Valla — of hermeneutics also. No doubt his impelling motive was to prove Roman Catholicism to be built on bad history and bad exegesis. Regardless of Flacius's polemic intent, the correction of bad history and bad exegesis has been valuable to persons of many faith and non-faith traditions. Hence the continuing value of the principles embodied in Flacius' Catalogus testium veritatis (1556; revised edition by J. C. Dietericus, 1672) and his Clavis scripturae sacrae (1567), followed by his Glossa compendiaria in N. Testamentum (1570). His characteristic formula, historia est fundamentum doctrinae, is better understood now than in his own day.