Vanadium(V) oxide (vanadia) is the chemical compound with the formula V2O5. Commonly known as vanadium pentoxide, this brown/yellow solid is the most stable and common compound of vanadium. Upon heating it reversibly loses oxygen. Related to this ability, V2O5 catalyses several useful aerobic oxidation reactions, the largest scale of which underpins the production of sulfuric acid from sulfur dioxide. It is a poisonous brown/yellow solid which, because of its high oxidation state, is both an amphoteric oxide and an oxidising agent. Unlike most metal oxides, it dissolves slightly in water to give a pale yellow, acidic solution. When this compound is formed by precipitation from aqueous solution, then its color is deep orange instead of brown/yellow.

The mineral form of this compound, shcherbinaite,[2] is extremely rare, almost always found among fumaroles. A mineral trihydrate, V2O5·3H2O, is also known under the name of navajoite.[3]

It also reacts with strong alkali to form polyoxovanadates, which have a complex structure that depends on pH.[4] If excess aqueous sodium hydroxide is used, the product is a colourless salt, sodium orthovanadate, Na3VO4. If acid is slowly added to a solution of Na3VO4, the colour gradually deepens through orange to red before brown hydrated V2O5 precipitates around pH 2. These solutions contain mainly the ions HVO42− and V2O74− between pH 9 and pH 13, but below pH 9 more exotic species such as V4O124− and HV10O285− predominate.

Thionyl chloride converts it to VOCl3:

V2O5 is easily reduced in acidic media to the stable vanadium(IV) species, the blue vanadyl ion (VO(H2O)52+). This conversion illustrates the redox properties of V2O5. For example, hydrochloric acid and hydrobromic acid are oxidised to the corresponding halogen, e.g.,

Solid V2O5 is reduced by oxalic acid, carbon monoxide, and sulfur dioxide to give vanadium(IV) oxide, VO2 as a deep-blue solid. Further reduction using hydrogen or excess CO can lead to complex mixtures of oxides such as V4O7 and V5O9 before black V2O3 is reached. Vanadates or vanadyl(V) compounds in acid solution are reduced by zinc amalgam through the interestingly colorful pathway:

The ions are, of course, all hydrated to varying degrees.

Precipitate of "red cake", which is hydrous V2O5

Technical grade V2O5 is produced as a black powder used for the production of vanadium metal and ferrovanadium.[4] A vanadium ore or vanadium-rich residue is treated with sodium carbonate to produce sodium metavanadate, NaVO3. This material is then acidified to pH 2–3 using H2SO4 to yield a precipitate of "red cake" (see above). The red cake is then melted at 690 °C to produce the crude V2O5.

Vanadium(V) oxide is produced when vanadium metal is heated with excess oxygen, but this product is contaminated with other, lower oxides. A more satisfactory laboratory preparation involves the decomposition of ammonium metavanadate at around 200 °C:

In terms of quantity, the dominant use for vanadium(V) oxide is in the production of ferrovanadium (see above). The oxide is heated with scrap iron and ferrosilicon, with lime added to form a calcium silicate slag. Aluminium may also be used, producing the iron-vanadium alloy along with alumina as a by-product.[4] In 2005 a shortage of V2O5 caused its price to rise to $40/kg, which in turn caused a rise in the price of ferrovanadium.[citation needed]

Another important use of vanadium(V) oxide is in the manufacture of sulfuric acid, an important industrial chemical with an annual worldwide production of 165 million metric tons in 2001, with an approximate value of US$8 billion. Vanadium(V) serves the crucial purpose of catalysing the mildly exothermic oxidation of sulfur dioxide to sulfur trioxide by air in the contact process:

The discovery of this simple reaction, for which V2O5 is the most effective catalyst, allowed sulfuric acid to become the cheap commodity chemical it is today. The reaction is performed between 400 and 620 °C; below 400 °C the V2O5 is inactive as a catalyst, and above 620 °C it begins to break down. Since it is known that V2O5 can be reduced to VO2 by SO2, one likely catalytic cycle is as follows:

Paradoxically, it is also used as catalyst in the selective catalytic reduction (SCR) of NOx emissions in some power plants. Due to its effectiveness in converting sulfur dioxide into sulfur trioxide, and thereby sulfuric acid, special care must be taken with the operating temperatures and placement of a power plant's SCR unit when firing sulfur-containing fuels.

Maleic anhydride is another important industrial material, used for the manufacture of polyester resins and alkyd resins.[5] Vanadium(V) oxide can catalyse its production from a variety of organic starting materials such as n-butane, furfural and benzene, the last of which is the usual commercial method. In a related process, phthalic anhydride, used for making plasticisers for PVC manufacture, may be produced by V2O5 catalysed oxidation of ortho-xylene or naphthalene at 350–400 °C.

Due to its high thermal coefficient of resistance, vanadium(V) oxide finds use as a detector material in bolometers and microbolometer arrays for thermal imaging. It also finds application as an ethanol sensor in ppm levels (up to 0.1 ppm).

Possible new uses include the preparation of bismuth vanadate ceramics for use in solid oxide fuel cells.[6] Another new application is in vanadium redox batteries, a type of flow battery used for energy storage, including large power facilities such as wind farms. 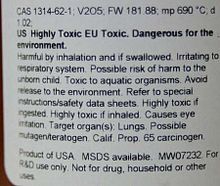 Vanadium(V) oxide exhibits modest toxicity to humans, with an LD50 of about 470 mg/kg. The greater problem is with inhalation of the dust, where the LD50 ranges from 4-11mg/kg for a 14 day exposure.[7] Vanadate (VO43−), formed by hydrolysis of V2O5 at high pH, appears to inhibit enzymes that process phosphate (PO43−). However the exact mode of action remains elusive.[4]