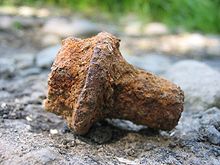 /ˈɒksaɪd/) is a chemical compound that contains at least one oxygen atom in its chemical formula. Metal oxides typically contain an anion of oxygen in the oxidation state of −2.

Most of the Earth's crust consists of solid oxides. Oxides result when elements are oxidized by oxygen in air. Combustion of hydrocarbons affords the two principal oxides of carbon, carbon monoxide and carbon dioxide. Even materials that are considered to be pure elements often contain a coating of oxides. For example, aluminium foil has a thin skin of Al2O3 that protects the foil from further corrosion.

Virtually all elements burn in an atmosphere of oxygen, or an oxygen rich environment. In the presence of water and oxygen (or simply air), some elements—lithium, sodium, potassium, rubidium, caesium, strontium and barium—react rapidly, even dangerously, to give the hydroxides. In part for this reason, alkali and alkaline earth metals are not found in nature in their metallic, i.e., native, form. Caesium is so reactive with oxygen that it is used as a getter in vacuum tubes, and solutions of potassium and sodium, so called NaK are used to deoxygenate and dehydrate some organic solvents. The surface of most metals consists of oxides and hydroxides in the presence of air. A well known example is aluminium foil, which is coated with a thin film of aluminium oxide that passivates the metal, slowing further corrosion. The aluminium oxide layer can be built to greater thickness by the process of electrolytic anodising. Although solid magnesium and aluminium react slowly with oxygen at STP, they, like most metals, will burn in air, generating very high temperatures. Finely grained powders of most metals can be dangerously explosive in air. Consequently, they are often used in Solid-fuel rockets.

In dry oxygen, iron readily forms iron(II) oxide, but the formation of the hydrated ferric oxides, Fe2O3−2x(OH)x, that mainly comprise rust, typically requires oxygen and water. The production of free oxygen by photosynthetic bacteria some 3.5 billion years ago precipitated iron out of solution in the oceans as Fe2O3 in the economically important iron ore hematite.

Due to its electronegativity, oxygen forms chemical bonds with almost all elements to give the corresponding oxides. Noble metals (such as gold or platinum) resist direct chemical combination with oxygen, and substances like gold(III) oxide must be generated by indirect routes.

The oxide ion, O2−, is the conjugate base of the hydroxide ion, OH−, and is encountered in ionic solid such as calcium oxide. O2− is unstable in aqueous solution − its affinity for H+ is so great (pKb ~ −22) that it abstracts a proton from a solvent H2O molecule:

In the 18th century, oxides were named calxes or calces after the calcination process used to produce oxides. Calx was later replaced by oxyd.

Oxides are usually named after the number of oxygen atoms in the oxide. Oxides containing only one oxygen are called oxides or monoxides, those containing two oxygen atoms are dioxides, three oxygen atoms makes it a trioxide, four oxygen atoms are tetroxides, and so on following the Greek numerical prefixes. In the older literature and continuing in industry, oxides are named by contracting the element name with "a." Hence alumina, magnesia, chromia, are, respectively, Al2O3, MgO, Cr2O3.

Two other types of oxide are peroxide, O22−, and superoxide, O2−. In such species, oxygen is assigned higher oxidation states than oxide.

Oxides of more electropositive elements tend to be basic. They are called basic anhydrides; adding water, they may form basic hydroxides. For example, sodium oxide is basic; when hydrated, it forms sodium hydroxide.

Oxides of more electronegative elements tend to be acidic. They are called acid anhydrides; adding water, they form oxoacids. For example, dichlorine heptoxide is acid; perchloric acid is a more hydrated form.

Some oxides can act as both acid and base at different times. They are amphoteric. An example is aluminium oxide. Some oxides do not show behavior as either acid or base.

The following table gives examples of commonly encountered oxides. Only a few representatives are given, as the number of polyatomic ions encountered in practice is very large.