Württemberg
This article is about the region in Germany. For other uses, see Württemberg (disambiguation).
The title of this article contains the character ü. Where it is unavailable or not desired, the name may be represented as Wuerttemberg.

Württemberg (German pronunciation: [ˈvʏɐ̯təmˌbɛɐ̯k]), formerly known as Wirtemberg or Wurtemberg, is an area and a former state in southwestern Germany, including parts of the regions Swabia and Franconia.

Its traditional capital was Stuttgart. For short periods of time, the seat of the government was located in Ludwigsburg and Urach. The name of the dynasty and the state originates from a steep Stuttgart hill, close to Stuttgart-Untertürkheim. Now the region is part of the German state of Baden-Württemberg.

Württemberg, once a Duchy within the Holy Roman Empire, in 1806 became the Kingdom with the break-up of empire. This was during the reign of Frederick I of Württemberg. In 1918 it became a republic called the Free People's State of Württemberg.

After World War II, Württemberg was divided between the United States and French occupation zones and became part of two new states: Württemberg-Baden and Württemberg-Hohenzollern. After the Federal Republic of Germany was formed in 1949, these two states merged with Baden in 1952 to become the modern German state of Baden-Württemberg. 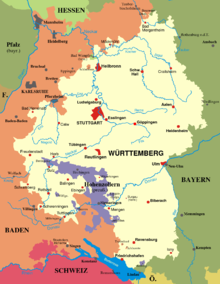 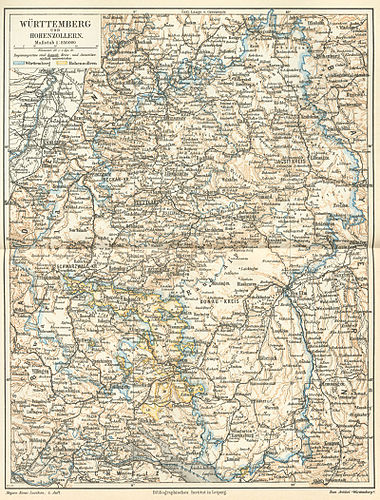 The temperate climate turns colder among the mountains in the south. The mean temperature varies at different points from 6 to 10°C (43–50°F). Abundant forests induce much rain, most of which falls in the summer. Given on the whole fertile and well-cultivated soil, agriculture formed the main occupation of the inhabitants.

It possessed rich meadowlands, cornfields, orchards, gardens, and hills covered with vines. The chief agricultural products were oats, spelt, rye, wheat, barley, and hops. To these add wine (mostly of excellent quality) of an annual value of about one million pounds sterling, peas and beans, maize, fruit, (chiefly cherries and apples), beets and tobacco, and garden and dairy produce.

Württembergers reared considerable numbers of cattle, sheep and pigs; and paid great attention to the breeding of horses.

Württemberg has a long history of producing red wines, although from somewhat different varieties than other German wine regions. Today the region of Württemberg is a designation (Anbaugebiet) for quality wine in Germany,[1] separate from the wine region of Baden. With 11,522 hectares (28,471 acres) under viticulture in 2006, Württemberg is Germany's fourth largest wine region.[2] Winemaking cooperatives are responsible for almost 75% of the region's production.[3]

The Württemberg wine region is centered on the valley of the Neckar and several of its tributaries, Rems, Enz, Kocher and Jagst.

The Kingdom of Württemberg lacked minerals of great industrial importance apart from salt and iron. The salt industry came to prominence only at the beginning of the 19th century. The iron industry, on the other hand, had great antiquity, but completely lacked coal mines within the Kingdom. Other minerals produced included granite, limestone, ironstone and fireclay.

The old-established manufacturers embraced linen, woolen and cotton fabrics, particularly at Esslingen and Göppingen, and paper-making, especially at Ravensburg, Heilbronn and other places in Lower Swabia.

The manufacturing industries, assisted by the government, developed rapidly during the later years of the 19th century, notably metal-working, especially such branches of it as require exact and delicate workmanship. Particular importance attached to iron and steel goods, locomotives (for which Esslingen enjoyed a good reputation), machinery, cars, bicycles, small arms (in the Mauser factory at Oberndorf), all kinds of scientific and artistic appliances, pianos (at Stuttgart), organs and other musical instruments, photographic apparatus, clocks (in the Black Forest), electrical apparatus, and gold- and silver-goods.

Extensive chemical works, potteries, cabinet-making workshops, sugar factories, breweries and distilleries operated. Water-power and petrol largely compensated for the lack of coal. Among other interesting developments note the manufacture of liquid carbonic acid gas extracted from natural gas springs beside the Eyach, a tributary of the Neckar.

The Kingdom of Württemberg's principal exports included cattle, cereals, wood, pianos, salt, oil, leather, cotton and linen fabrics, beer, wine and spirits. Commerce centred on the cities of Stuttgart, Ulm, Heilbronn and Friedrichshafen. Stuttgart, once called the Leipzig of South Germany, boasted an extensive book trade. The kingdom had creative inventors; Gottlieb Daimler, the first car manufacturer, incorporated his business in 1900 as Daimler Motoren Gesellschaft, and its successor company Mercedes-Benz always had plants near Stuttgart. At Friedrichshafen on Lake Constance Count Ferdinand von Zeppelin constructed his airships from 1897 to his death in 1917.

In 1907 the Kingdom of Württemberg had 2,000 km (1,200 mi) of railways, of which all except 256 km (159 mi) belonged to the state. Navigable waters included the Neckar, the Schussen, Lake Constance, and the Danube downstream from Ulm. The Kingdom had fairly good quality roads; the oldest of them of Roman construction. Württemberg, like Bavaria, retained the control of its own postal and telegraph service on the foundation of the new German Empire in 1871.

As a constitutional monarchy, the Kingdom of Württemberg functioned as a member of the German Empire, with four votes in the then Federal Council (Bundesrat), and seventeen in the Reichstag (parliament). The constitution rested on a law of 1819, amended in 1868, in 1874, and again in 1906. The hereditary crown conveyed the simple title of "King of Württemberg". The king received a civil list of 103,227 pounds sterling.

The lower house (Abgeordnetenhaus) had 92 members:

The King appointed the President of the upper chamber; after 1874 the lower chamber elected its own chairman. Members of both houses had to have reached twenty-five years of age.

The highest executive power rested in the hands of the Ministry of State (Staatsministerium), consisting of six ministers for:

The Kingdom also had a Privy Council, consisting of the ministers and some nominated councillors (wirkliche Staatsräte), who advised the sovereign at his command. The judges of a special supreme court of justice, called the Staatsgerichtshof (which functioned as the guardian of the constitution), gained office partly through election by the chambers and partly through appointment by the King. Each of the chambers had the right to impeach the ministers.

The Kingdom comprised four governmental departments (Kreise), subdivided into sixty-four divisions (Oberamtsbezirke), each under a headman (Oberamtmann) assisted by a local council (Amtsversammlung). A Government (Regierung) heads each of the four departments.

The right of direction over the churches resided in the King, who had also, so long as he belonged to the Protestant Church, the guardianship of the spiritual rights of that Church. The Protestant Church is controlled (under the minister of religion and education) by a consistory and a synod. The consistory comprised a president, 9 councillors and 6 general superintendents or prelates from six principal towns. The synod consisted of a representative council, including both lay and clerical members.

The Roman Catholic Church in the Kingdom answered to the bishop of Rottenburg, in the archdiocese of Freiburg. Politically it obeyed a Roman Catholic council, appointed by government.

The Kingdom claimed universal literacy (reading and writing) over the age of ten years. Higher learning occurred at the university of Tübingen, in the Stuttgart University of Technology, the veterinary college at Stuttgart, the commercial college at Stuttgart, and the agricultural college of Hohenheim. Gymnasia and other schools existed in all the larger towns, while every commune had a primary school. Numerous schools and colleges existed for women. Württemberg also had a school of viticulture.

Under the terms of a military convention of November 25, 1870 the troops of Württemberg formed the XIII (Royal Württemberg) Corps of the Imperial German Army.

Until 1873 the kingdom and some neighbouring states used the "Gulden" as currency. From 1857 the Vereinsthaler was introduced alongside it, and from 1873 both were replaced by the Gold Mark.

The state revenue for 1909–1910 comprised an estimated 4,840,520 pounds sterling, nearly balanced by expenditure. About one-third of the revenue derived from railways, forests and mines; about 1,400,000 pounds sterling from direct taxation; and the remainder from indirect taxes, the post-office and sundry items.