The Grand Duchy of Posen, or the Grand Duchy of Poznań (German: Großherzogtum Posen; Polish: Wielkie Księstwo Poznańskie) was part of the Kingdom of Prussia, created from territories annexed by Prussia after the Partitions of Poland, and formally established following the Napoleonic Wars in 1815. Per agreements derived at the Congress of Vienna it was to have some autonomy. However in reality it was subordinated to Prussia and the proclaimed rights for Polish subjects were not fully implemented. The name was unofficially used afterward for denoting the territory, especially by Poles, and today is used by modern historians to describe different political entities until 1918. Its capital was Posen (Polish: Poznań). The Grand Duchy was formally replaced by the Province of Posen in the Prussian constitution of 5 December 1848. 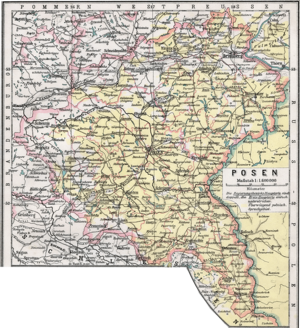 The Prussian Province of Posen. Yellow colour: Polish-speaking areas according to German authorities

Originally part of the Kingdom of Poland, this area largely coincided with Greater Poland. The mid-17th century brought devastation from invading Swedish forces during "the Deluge". The eastern portions of the territory were taken by the Kingdom of Prussia during the Partitions of Poland; during the first partition (1772), Prussia took just the Netze District, the portion along the Noteć (German: Netze) river. Prussia added the remainder during the second partition in 1793. Prussia briefly lost control during the Kościuszko Uprising in (1794).

It was initially administered as the province of South Prussia. The Poles were the primary ally of Napoleon Bonaparte in Central Europe, participating in the Greater Poland Uprising of 1806 and supplying troops for his campaigns. After the defeat of Prussia by Napoleonic France, the Duchy of Warsaw was created by the Treaty of Tilsit in 1807.

According to the Congress of Vienna, put into action after the fall of Napoleon in 1815, parts of the former Prussian Partition of Poland was returned to Prussia. From them the Grand Duchy of Posen was to be created, that was to be a nominally autonomous province under Hohenzollern rule with the rights of "free development of Polish nation, culture and language", and was outside the German Confederation. Originally the Duchy was to include Chełmno and Toruń. Prussia however disregared this promise from Congress of Vienna. At this time the city of Poznań was the administrative center and the seat of "Prince Antoni Henryk Radziwiłł of Poznań". In reality the actual administrative power over the region was awarded by Prussia to over-president of the province who was a German[1]

At the beginning of the Prussian takeover of Polish territories, the discrimination and repression of Poles consisted of reducing their access to education and the judicial system. Prussian officials identified Germanisation as the progress of higher culture over a lower one. As a result the local administration discriminated against Poles. After 1824 attempts to Germanise the school system were hastened and the government refused to establish a Polish university in Poznań. Polish politicians issued protests against Prussian policies and a secret, patriotic Polish organisation was founded called Towarzystwo Kosynierów (Society of Scythemen). Resistance activity of Poles resulted in reaction from Berlin, where a trial was held in connection to links between Poles from Prussian parts of Poland with Poles from Russian Congress Poland.[2]

The 1830 November Uprising within Congress Poland against the Russian Empire was significantly supported by Poles from the Grand Duchy. Afterward, the Prussian administration under Oberpräsident Edward Flotwell known for his antipolonism[3] introduced a stricter system of repression against the Poles. Prussian authorities attempted to expel Poles from administration to weaken the Polish nobility by buying its lands, and, after 1832, the role of the Polish language in education was significantly repressed. Local self-government of land-lords which was dominated by Polish nobility was abolished, and its place were appointed commissars appointed by Prussian state. Monasteries and their assets were confiscated by Prussia.[4] The office of the governor was abolished. Germanisation of institutions, education as well through colonisation was implemented.[5]

Before 1848 repressions intensified in the Duchy, censorship was strengthened, German settlers were brought in.[6] W large patriotic demonstrations were held in memory of Antoni Babiński-member of Polish Democratic Society. During attempted arrest the Prussian gendarme engaged in fight with him and was wounded by a gunshot. Babiński was then captured, sentenced to death and executed in Poznań. His public execution in February 1847 was accompanied by public mourning. Cloth soaked in his blood and other remains were distributed as national relic. Large prayers were held in his memory, often against orders of Prussia. Members of such gatherings were persecuted by police.[7] At the same time the national self-awareness grew among rural population. Anti-Prussian sentiment grew as response to policy of Germanisation and repression by Prussian authorities and conspiracy organisation called Związek Plebejuszy found a potent ground. It was led by bookseller Walenty Stefański, poet Ryszard Berwiński and lawyer Jakub Krauthofer-Krotowski.[8]

Frankfurt Parliament of 1848 and the Duchy

During the Revolutions of 1848 the Frankfurt Parliament attempted to divide the Duchy into two parts: the Province of Poznań, which would have been given to the Germans and annexed to a newly-created German Empire, and the Province of Gniezno, which would have been given to the Poles and held outside Germany, but because of the protest of Polish parliamentarians these plans failed and the integrity of the duchy was preserved. However, on February 9, 1849, after a series of broken assurances, the Prussian administration renamed the duchy to the Province of Posen. However the Prussian Kings up to William II, German Emperor still held the title "Grand Duke of Posen" until 1918. 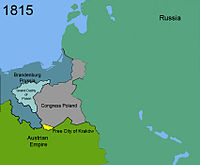 Grand Duchy of Posen (light blue) after its creation, in 1815

The area was 28,951 km² and contained most of the territories of the historical province of Greater Poland, which comprised the western parts of the Duchy of Warsaw (Departments of Poznań, Bydgoszcz, partly Kalisz) that were ceded to Prussia according to the Congress of Vienna (1815) with an international guarantee of self-administration and free development of the Polish nation.

The monarch of the duchy, with title of Grand Duke of Posen, was the Hohenzollern king of Prussia and his representative was the Duke-Governor: the first was Prince Antoni Radziwiłł (1815–1831), who was married to Princess Louise of Prussia, the king's cousin. The governor was assigned to give advice in matters of Polish nationality, and had the right to veto the administration decisions; in reality, however, all administrative power was in the hands of the Prussian over-president of the province.

The Prussian administrative unit that covered the territory of the Duchy was called the Province of the Grand Duchy of Posen in the years 1815–1849, and later to simplify just the Province of Posen (German: Provinz Posen, Polish: Prowincja Poznańska).

The territory of the duchy was divided into two regions (Polish: Rejencja), Posen and Bromberg, which were further divided into 26 original districts (German: Kreis(e), Polish: Powiat(y)) administered by landrats ("district councils"). Later, these were redivided into 40 districts, plus two urban districts. In 1824, the Duchy also received a provincial council (term started in 1827) but with little administrative power, limited to providing advice. In 1817, Culmerland (Chełmno Land) was moved to West Prussia.