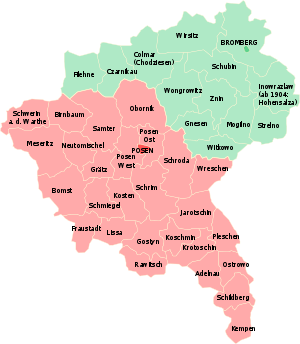 Posen was the southern of two Prussian administrative regions, or Regierungsbezirke (Polish: Rejencja), of the Grand Duchy of Posen (1815–49) and its successor, the Province of Posen (1849-1918). The administrative region was bordered on the north by Regierungsbezirk Bromberg, to the west by the Province of Brandenburg, to the south by the Silesia Province, and to the east by Russian Congress Poland.

The Posen region was inhabited mainly by Roman Catholic Poles, although it had a minority of mostly Protestant Germans.

Note: Prussian provinces were subdivided into units called Kreise (singular Kreis, abbreviated Kr., English "circle"), which were similar to large counties in US terms. Cities would have their own Stadtkreis (English: "urban district") and the surrounding rural area would be named for the city, but referred to as a Landkreis (English: "rural district"). In the case of Posen, the Landkreis was split into two: Landkreis Posen West, and Landkreis Posen East. The region was originally divided into 16 larger Kreise, which were later divided into the final 27 Kreise, the larger ones spinning off smaller units.

Administrative units of the Prussian province of Posen (1815-1919)