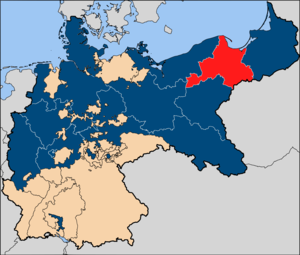 West Prussia (Audio-de|Westpreußen|Westpreußen.ogg; _pl. Prusy Zachodnie) was a province of the from 1773&ndash;1824 and 1878&ndash;1918 which was created out of the earlier Polish province of . After 1918, its central parts became the and the , while the parts remaining with the German became the new or were joined to the as Regierungsbezirk West Prussia. The territory was included within from 1939&ndash;45, after which it became part of . The territory of former West Prussia is currently divided between Poland's Pomeranian and Kuyavian-Pomeranian Voivodeships.

"West Prussia" is also used as a general name for the region in historical context from the 13th century to 1945. Inhabited by and during the , the population became mixed over centuries of immigrations by , , , , , , and Scots, among others.

In the (1454-1466), the towns of and western Prussia rebelled against the and sought the assistance of King of Poland. By the , Pomerelia and western Prussia became the Polish province of , which received several special rights, especially in (Gdańsk). Royal Prussia became part of the in 1569 and retained self-government by Prussian natives. Eastern Prussia, on the other hand, remained with the Teutonic Knights, who were reduced to vassals of Poland by the Peace of Thorn. This territory became the in 1525 and removed the Polish suzerainty in 1657 .

Most of Royal Prussia was annexed by the in the 1772 , and became the Province of West Prussia the following year, with the exception of , which became part of the . King quickly began improving the infrastructure of the new territory. The Polish administrative and legal code was replaced by the Prussian system, and education improved; 750 schools were built from 1772-1775.

However, Frederick looked upon many of his new citizens with scorn. He had nothing but contempt for the "", the numerous Polish nobility, and wrote that Poland had "the worst government in Europe with the exception of Turkey".

From 1807&ndash;13 during the , southern parts of West Prussia were added to the , a Napoleonic client state. In 1815 the province, restored to the Kingdom of Prussia, was administratively subdivided into the "e" Danzig and Marienwerder. From 1824-1878 West Prussia was combined with East Prussia to form the , after which they were reestablished as separate provinces. The region became part of the in 1871 during the .

After the in 1919, most of West Prussia was granted to the (the ) or the , while small parts in the west and east of the former province remained in Weimar Germany. The western remainder formed in 1922, while the eastern remainder became part of Regierungsbezirk West Prussia within East Prussia.

This was carried out by Allied soldiers, who committed brutality and war crimes.

Note: Prussian provinces were subdivided into districts called "Kreise" (singular "Kreis", abbreviated "Kr."). Cities would have their own "" (urban district) and the surrounding rural area would be named for the city, but referred to as a "" (rural district).

Population according to the census 1905: