Oxley Wild Rivers National Park is in New South Wales, Australia, 445 kilometres north of Sydney and is named in memory of the Australian explorer John Oxley, who passed through the area in 1818. The park covers 145,000 ha,[1] being one of the largest national parks in NSW.

The Park is part of the Hastings-Macleay Group of the World Heritage Site Gondwana Rainforests of Australia inscribed in 1986 and added to the Australian National Heritage List in 2007.

The Oxley Wild Rivers National Park (OWRNP) was World Heritage listed in recognition of the extensive dry rainforest that occurs within the park, and the associated rich biodiversity that includes several rare or threatened plants and animals. There are at least 14 waterfalls in the park.[2]

For thousands of years, the Northern Tablelands and these valleys were the tribal lands of the Dangaddi aboriginal people, whose descendants are now concentrated in the lower Macleay River. Some marked trees have been found and a limestone cave shelter has been excavated near Kunderang Brook.

In 1818 explorer John Oxley and his party tried to descend the Apsley valley, but steep gorges blocked the way until they proceeded around the head of the Apsley Falls. After Oxley passed through the cedar-getters were the first white people to penetrate these remote gorges and valleys in search of Australian red cedar (Toona ciliata) which was floated down-river to Kempsey.

There have been cattle grazing through the Macleay River Gorges, called 'The Falls', since the 1840s, with mustering points (yards and huts) occurring at Top Creek, (Sunderlands) Middle Yards, Kunderang, Left Hand, Oven Camp, Youdales Hut, Green Gully, Yarrowitch River and Front Tableland. The recently restored Middle Yards Hut was once part of the 32,000-hectare East Kunderang cattle station on the Macleay River. 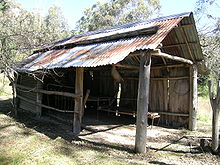 The Bark Hut was constructed for mustering trips more than 70 years ago by two Brennan brothers and has been preserved by the NPWS.

In the late 19th century several gold and antimony mines were established around the rim of the gorges, at places such as Halls Peak and Hillgrove, as well as two ambitious hydro-electric schemes to power them, the remains of which can be seen today along the Styx River and at Gara Gorge.

In 1976 the Apsley Macleay Gorges were identified as being of true wilderness quality. At that stage the public protection offered to the area was limited to two small reserves in the south, and a few local council run recreation areas at popular sites such as Wollomombi Falls, Dangars and Apsley Falls. With future land-use undecided, the NSW Electricity Commission began surveying the Apsley Valley for a hydro-electric scheme in the late 1970s. The Apsley Gorge National Park of 6,718 hectares was gazetted followed by the 3,456 hectare Yarrowitch Gorge National Park soon after.

During late 1981 the track to the Apsley River at Riverside was improved and Elcom installed a river gauging station. The project was shelved following a land use study recommending a national park be established. In 1986 the park was gazetted to foster nature conservation, cultural heritage and tourism on the Northern Tablelands. In 1989 East Kunderang Station of 30,400 hectares passed to the National Parks and Wildlife Service (NPWS) and was proclaimed the Oxley Wild Rivers National Park.

In 1994 Oxley Wild Rivers National Park was inscribed on the Register of World Heritage sites, as part of the Central Eastern Rainforest Reserves of Australia (CERRA). Later 1,850 ha of Winterbourne State Forest, also known at the Big Lease, was added to the wilderness. The remaining 1,560 ha of Winterbourne and 1,075 ha of Enmore State Forests are to be added to the National Park. Further inclusions include Green Gully headwaters and 1,439 ha of leasehold land in the lower Chandlers River gorge.

The Macleay Gorges Wilderness Area was declared in 1996 and extended in 1997. It covers over 50,000 ha., mainly in the central part of the Park.

In December 2009 a lightning strike started a bushfire in the Youdales Hut area. The hut was unaffected, but 1,500 hectares of inaccessible steep country was burnt out before it was brought under control. Another lightning strike started a large bushfire in the Reedy Creek region of the park. This fire has burnt out over 8,000 hectares of rough country.[3]

The Oxley Wild Rivers National Park lies along the Great Escarpment between the Northern Tablelands, and the east coast and has dramatic gorges and waterfalls, extensive wilderness and dry rainforest. The main rivers in the National Park are the: Apsley River, Macleay River, Chandler River, Tia River, Styx River, Gara River, Yarrowitch River, Oaky River and the Kunderang Brook. There are a number of waterfalls situated throughout the park including: Wollomombi, Apsley Falls, Tia Falls and Dangars Falls as well as numerous cascades. The waterfalls in the park are at their best after rains and the main ones are accessible by car. 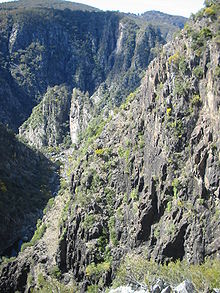 The formation of the area began with muddy sediments under ancient oceans that were changed by heat and pressure into hard rocks, then uplifted by movements of the continental plate and volcanic eruptions. This resulted in the formation of the Great Dividing Range, an undulating plateau that sloped gently to the west and fell away steeply to the east.

Erosion by wind, rain, storms and ice over millions of years carved out the plateaus of the Northern Tablelands, and rivers and streams gradually cut back the eastern edge of the tableland creating deep gorges that eventually formed one continuous escarpment. The jagged scarp is slowly retreating west and this movement can be seen today in the erosion of steep cliffs at places like Wollomombi, Dangars and Apsley Gorges.

The Apsley Macleay Gorges are a converging point for moister eastern coastal and dry western floras, and some 950 native plant species have been identified, of which 36 are rare or threatened.

The rare plants found include: Grevillea obtusiflora, Acacia blakei (subsp. diphylla) (Wollomombi or gorge wattle) and Acacia ingramii which grows at Dangars Gorge. Some Australian red cedar trees may also be seen in the more remote locations. Threatened flora of the area includes the Wedge-leaved Guinea flower (Hibbertia hermanniifolia), Grevillea beadleana and Hakea fraseri (Gorge Hakea). Hillgrove spotted gum (Eucalyptus michaeliana) may be seen south of Hillgrove and in the Big Lease, north-east of Walcha. The beautiful Caladenia orchid has been spotted at Long Point.[4]

Dry rainforests in the OWRNP contain at least 187 plant species and they are visible as dense, dark green patches of brush box (Lophostemon confertus), favouring hollows where there is shelter from wind and sun. The adaptable Bird's Nest Fern (Asplenium australasicum) grows in a variety of sites as an epiphyte on large trees, independently growing on the forest floor or attached to rocks. Other plants that could be found in or around dry rainforests include: Native Rosella (Hibiscus heterophyllus), gorge mock-olive (Notelaea microcarpa), Brachychiton discolor (lacebark), Moreton Bay fig (Ficus macrophylla), native olive (Olea paniculata), red kamala (Mallotus philippensis), scentless rosewood (Synoum glandulosum)[5] and shatterwood (Backhousia sciadophora). 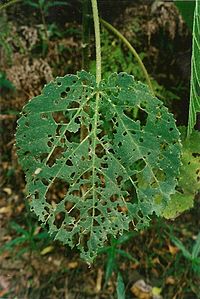 The hazardous stinging tree (Dendrocnide excelsa) is found in various locations throughout the park. This is a dangerous plant and physical contact with it should be avoided. The stems and leaves are coated with fine hairs which when imbedded in the skin cause severe pain and irritation for prolonged periods. Smilax australis (lawyer vine or wait-a-while) is another plant to be avoided as it has prickly climbing stems that are up to eight metres long and will catch in clothing or the skin.

The under storey is often sparse except for occasional Acacia (wattles), Bursaria spinosa (blackthorn), Xanthorrhoea (grass trees) and The cassinia, geebung (Persoonia spp.), Pomaderris lanigera (woolly pomaderris), Jacksonia scoparia (dogwood) and Prostanthera (mint bush) are the most common species in the area.[6]

Because the conditions are extreme on the cliffs, quite a number of rare and uncommon shrubs are found there. These include: broadleaf hopbush (Dodonaea rhombifolia), Dodonaea serratifolia, Grevillea beadleana, Grevillea obtustiflora, Hakea fraseri (gorge hakea), climbing fig, orchids and Westringia sp. Bertya ingramii (Narrow-leaved bertya) is an endangered species of shrub that is found in two locations, growing among rocks or in thin soils close to cliff-edges in dry woodland with she-oaks, wattles and tea-trees.[7]

The park is rich in fauna, with over 350 species recorded, including 55 mammals. Oxley Wild Rivers National Park is a major refuge

for the Brush-tailed Rock-wallaby (Petrogale pencillata), with the largest confirmed population in the Green Gully area of Yarrowitch.

Over 173 bird species have been recorded in Oxley Wild Rivers National Park.

There have been 38 reptile and 19 amphibian species recorded in Oxley Wild Rivers National Park. Skinks, goannas, tortoises, lizards, snakes, frogs and fish occur in the park, particularly on the river flats. A number of fish species have been recorded. Notable, is the speckled longfin eel (Anguilla reinhardtii), which breeds in the ocean with the juveniles eventually returning to the Apsley–Macleay River system.[8]

Car access to the park is mainly via the Waterfall Way, east of Armidale and Oxley Highway, east of Walcha. All roads to visitor facilities are suitable for conventional cars except the 4WD tracks to Riverside, Youdales Hut and East Kunderang. A permit and key is required to gain vehicle access to these three sites.

There are several visitor entry points where visitors may enter with a 2WD car and camp overnight: 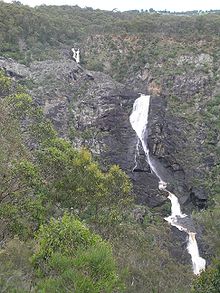 The three drops of the Tia Falls

4WD vehicles are permitted to access Riverside, Youdales Hut and East Kunderang Homestead where a permit and key are required. Riverside and Youdales Hut require a low range 4WD vehicle and trailers are not permitted. 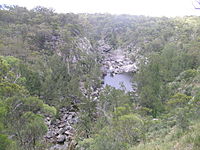 Weeds in the park

Blackberry, giant Parramatta grass, Lantana and sweet briar (Rosa rubiginosa) being controlled using herbicide. Spraying results have been encouraging but follow-up spraying is imperative to ensure long-term effectiveness. The release of the cactus moth Cactoblastis cactorum within the park has facilitated the biological control of prickly pear.

Feral cats and foxes occur in moderate numbers and can impact on native fauna.

Brumbies on the Chandler River

Wild dogs occur in the park and include dingoes, hybrids with domestic dogs. The National Parks and Wildlife Service give assistance to nearby landowners with respect to the control of these canine species. Wild dogs are controlled using a combination of methods, including baiting, aerial shooting and cooperative fencing with neighbours.

Feral pigs have a large impact on the park and cause ground disturbance that encourages soil erosion and weed invasion. Pigs are trapped, poisoned and are also controlled with ground and aerial shooting.

Feral goats are confined to the upper Chandler, Styx, Oaky, and Apsley rivers. They compete with the threatened brush-tailed rock-wallabies for food and shelter. The goats are controlled using ground and aerial shooting.

Over 100 head of feral horses (brumbies) have been passively trapped in the Apsley catchment then re-homed.