The Common Brushtail Possum (Trichosurus vulpecula, from the Greek for "furry tailed" and the Latin for "little fox", also known as Phalangista vulpina[3]) is a nocturnal, semi-arboreal marsupial of the family Phalangeridae, it is native to Australia, and the largest of the possums.

Like most possums, the Common Brushtail is nocturnal. It is mainly a folivore, but has been known to eat small mammals such as rats. In most Australian habitats, leaves of eucalyptus are a significant part of the diet but rarely the sole item eaten. The tail is prehensile and naked on its lower underside. There are four colour variations: silver-grey, brown, black and gold.[4]

It is the Australian marsupial most often seen by city-dwellers, as it is one of few that thrive in cities, as well as a wide range of natural and human-modified environments. Around human habitations, Common Brushtails are inventive and determined foragers with a liking for fruit trees, vegetable gardens, and kitchen raids.

In New Zealand, where it was introduced in the 19th century, it is a major agricultural and conservation pest. 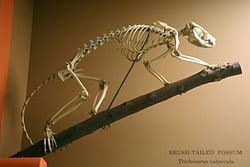 The common brushtail possum has large and pointed ears. It has a bushy tail (hence its name) with a prehensile tip and a hairless patch on the underside which helps it grasp tree branches.[5][6] Its forefeet have sharp claws and the hindfeet each have an opposable, clawless toe which have good grips.[6] The second and third toes are fused with a long, split claw that is used for grooming.[6] The brushtail possum has thick and woolly fur that ranges in colour depending on the subspecies. Colour patterns tend to be silver-gray, brown, black, red or cream. They tend to have lighter underbellies and brown or black tails.[5][6] It also has and dark patches on its muzzle. The common brushtail possum has a head and body length of 32-58 cm[5] with a tail length of 24-40 cm.[6] It weighs 1.2-4.5 kg.[6] Males are generally larger than females. In addition, the coat of the male tends to blend into reddish at the shoulders. As with all marsupials, the female brushtail possum has a forward-opening, well-developed pouch.[5] The brushtail possum has a scent gland located on the chest used to mark territories. The reddish secretions from this gland give the fur around it a brown or reddish appearance.[7] 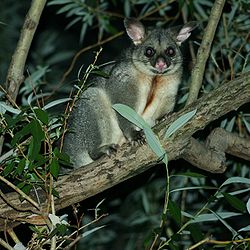 The common brushtail possum is perhaps most widespread mammal of Australia. It is found throughout the eastern and northern parts of the continent, as well as some western regions, Tasmania and a number of offshore islands, such as Kangaroo Island and Barrow Island. It is also widespread in New Zealand since its introduction in 1840. The brushtail possum can be found in a variety of habitats, such as rainforests, woodland, dry eucalypt forest, pine plantations, semiarid areas and even parks and gardens in urban areas.[6][5] It is mostly a forest inhabiting species, however it is also found in treeless areas.[6] In New Zealand, the highest population densities (5-25 per ha) appear to occur in broadleaf-podocarp forests that have a rich understory of nutritious species or are adjacent to farmland pastures.[8] Much lower densities (1-3/ha) occur in southern beech forests and pine plantations that lack understory species.[8] In Australia, most densities are less than 2/ha, ranging from less than 0.3/ha to a maximum of 6/ha in a Tasmanian rainforest.[9] These lower densities in their native land are likely due to sparser vegetation forests in eucalypt forests, as well as the existence of predators that do not exist in New Zealand. In Australia, brushtail possums are threatened by humans, tiger quolls, foxes, cats, goannas, carpet snakes and certain owls. In New Zealand, brushtail possums are threatened only by humans and cats.[9] 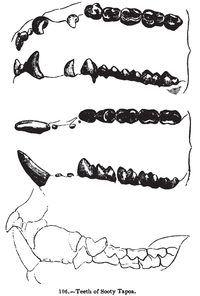 Dentition of a common brushtail possum

The common brushtail possum thrives on whatever vegetation is available.[9] It eats Eucalyptus leaves. However, it will also eat flowers, shoots, fruits and seeds. Brushtail possums have adapted to eating several introduced species, such as the shoots and male cones of pine trees in plantations, pastures of clover and grass. In suburban gardens, they will eat ornamental and orchard species.[9] They will also eat animal matter, such as insects, bird eggs and sometimes other small animals, including young birds. In New Zealand, brushtail possums have colonised all the native forests and eat many of the broad-leafed tree species, particularly the several species of rata and pohutakawa of the genus Meterosideros, which is a distant relative of eucalyptus.[9] In both Australia and New Zealand, brushtail possums may eat three or four different plant species in a night of foraging, unlike some other tree-dwelling marsupials, such as the koala and the greater glider, which restrict their foraging to a single species. The brushtail possum's molar teeth are more rounded than those of the greater glider and the ringtail possum, and cannot cut the leaf tissue of Eucalyptus foliage as finely as those of these more specialised feeders. However, possums can can crush plant tissue, which enables them to eat fruit or herbs on the forest floor more effectively. The brushtail possums’ caecum is not divided by internal ridges, as in the greater glider and common ringtail possum, and cannot separate coarse and fine particles as efficiently.[9] The brushtail possum cannot selectively retain the fluid and fine particles of an Eucalyptus diet, so loses much potential nitrogen in its faeces.[10] However, when eating a mixed diet and not Eucalyptus, brushtail possums obtain enough protein to survive from less food and can still raise their daily intake to meet the extra protein requirement of reproduction, particularly late lactation.[11] 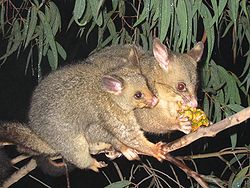 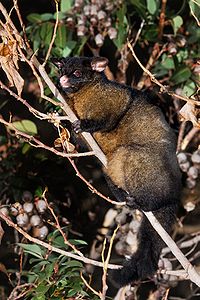 The common brushtail possum is largely arboreal and nocturnal. It has a mostly solitary lifestyle, and individuals maintain spacing between each other through scent-marking, vocalisations and antagonistic encounters. During the daytime, brushtail possums take shelter in dens which may be located in tree hollows, logs, dense undergrowths, caves, burrows of other species and even roof spaces of houses.[5][6] While they do sometimes share dens, brushtails normally sleep in separate dens. Dens sites appear to be more abundant in New Zealand forests than Australian eucalyptus forests and woodlands.[12] As such, a single brushtail possum in New Zealand can use around 10-15 dens, which is much more than the one to three dens used by single Australian brushtail possums.[9] Competition for dens sites from other brushtail possums, other marsupials, nesting birds and large reptiles, such as goannas, may contribute to the mortality of brushtail possums in Australia. This is likely another reason why brushtail possum population densities are smaller in Australia than in New Zealand.[9] Nocturnal encounters between adults of either sex are more often mild. They usually avoid direct contact and will peer silently at each other with erect ears.[9] Brushtail possums are among the most vocal marsupials and will communicate with various sounds such as clicks, grunts, hisses, alarm chatters, guttural coughs and screeching. The brushtail possum is normally not aggressive, although it can show aggression when protecting its young, and when shot but not killed.[5][6] 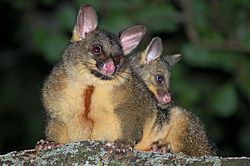 Common brushtail possums can breed at any time of the year, but breeding tends to peak in spring, from September to November, and in autumn, from March to May, in some areas. Mating is promiscuous and random; some males can sire several young in a season while over half sire none.[9] In one Queensland population, it apparently takes the males one month of consorting with females before they can mate with them.[13] Females have a gestation period of 16-18 days, after which they give birth to single young.[5][6] A newborn brushtail possum is only 1.5 cm long and weighs only 2 g. As usual for marsupials, the newborn brushtail possum may climb, unaided, through the female’s fur and into the pouch and attach to a teat. The young develops and remains inside the mother’s pouch for another four or five months. When older, the young is left in the den or rides on its mother’s back until it is seven to nine months old.[5][6] Females reach sexual maturity when they are one year old, and males do so at the end of their second year.[5][6] Recently, mature female young have a higher survival rate than their males counterparts due to establishing their home ranges closer to their mothers, while males travel farther. In the Orongorongo population, female young have been found to continue to associate with their mothers after weaning, and some will inherit the prime den sites.[14] There is possible competition between mothers and daughters for dens, and daughters may be excluded from a den occupied by the mother.[15] In forests with shortages of den sites, females apparently produce more sons, which do not compete directly for den sites, while in forests with plentiful den sites, female young are greater in number.[15] Brushtail possums can live up to 13 years in the wild.[5][6]

The common brushtail possum is considered a pest in some areas. It is known to cause damage to pine plantations, regenerating forest, flowers, fruit trees and buildings. In addition, it is a known carrier of the highly contagious bovine tuberculosis.[7] Its fur has been considered valuable and has been harvested. However, hunting is currently restricted to Tasmania. Although once hunted extensively for their fur in Australia, the common brushtail possum is now protected. The possum is partially protected in Tasmania and there is an annual hunting season. In addition, landowners in Tasmania can get help controlling the damage done by possums by obtaining Crop Protection Permits.[7] In New Zealand, there are no restrictions on hunting. The population does not seem to be declining, despite thousands of animals being killed each year.[7]