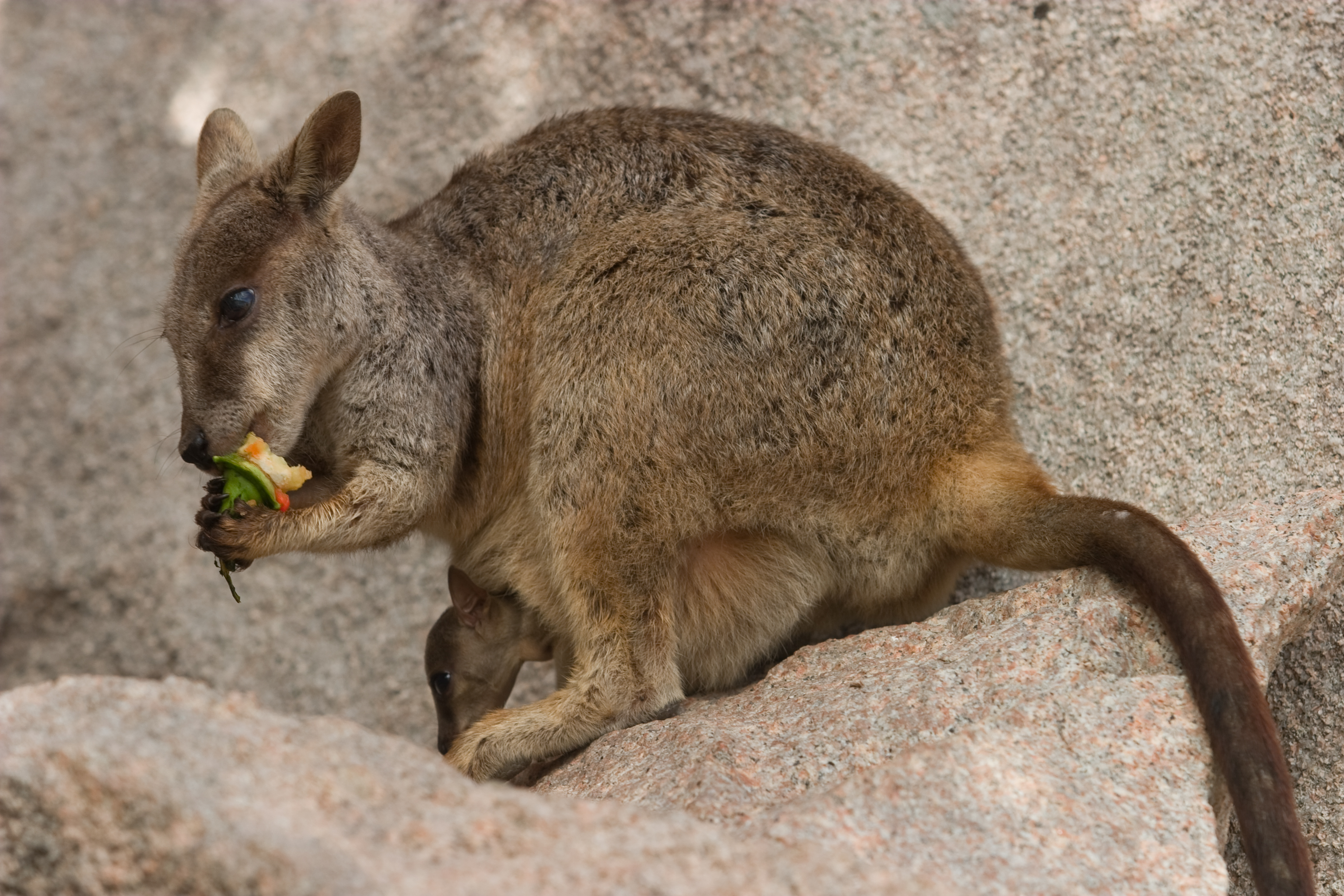 The rock-wallabies are the wallabies of the genus "Petrogale".

The medium-sized, often colourful and extremely agile rock-wallabies live where rocky, rugged and steep terrain can provide daytime refuge. Males are slightly larger than females with a body length of up to 59cm and a 70cm long tail.

Rock-wallabies are and live a fortress existence spending their days in steep, rocky, complex terrain in some kind of shelter (cave, overhang or vegetation) and ranging out into surrounding terrain at night for feed. The greatest activity occurs three hours before sunrise and after sunset.

Their reliance on refuges leads to the rock-wallabies living in small groups or colonies, with individuals having overlapping home ranges of about 15 hectares each. Within their colonies they seem to be highly territorial with a male’s territory overlapping one or a number of female territories. Even at night the wallabies do not move further than two kilometres from their home refuges.

Generally, there are three categories of habitat that the different species of rock-wallaby seem to prefer:
*Loose piles of large boulders containing a maze of subterranean holes and passageways
*Cliffs with many mid-level ledges and caves
*Isolated rock stacks, usually sheer sided and often girdled with fallen boulders

Suitable habitat is limited and patchy and has led to varying degrees of isolation of colonies and a genetic differentiation specific to these colonies.

Their total numbers and range have been drastically reduced since European colonisation, with populations becoming extinct from the south.

The ongoing extinction of colonies in recent times is of particular concern. In 1988, at in New South Wales for example, a caged population of 80 rock-wallabies was released to boost what was thought to be an abundant local wild population. By 1992 the total population was down to about seven. The survivors were caught and enclosed in a fox and cat-proof enclosure, and the numbers in this captive population have since begun to increase.

Scientists consider foxes the major reason for the recent extinctions, along with competing herbivores, especially goats, sheep and rabbits, diseases such as toxoplasmosis and hydatidosis, habitat fragmentation and destruction and a lower genetic health due to the increasing isolation of colonies.

Habitat conservation and pest management addressing foxes and goats appear to be the most urgent recovery actions to save the species.

The national recovery team with support from non-government organisations such as the has implemented various programs ranging from land acquisition to captive breeding and awareness raising projects.

Monitoring programs are implemented to register any changes in population sizes. Genetic surveys establish the genetic diversity of populations. Fox and goat eradication aid the survival of local populations, and captive breeding programs are used as an 'insurance policy' to build up wallaby numbers to boost wild populations.

In the case of the these strategies have prevented the extinction of the species in New South Wales.