Polydimethylsiloxane (PDMS) belongs to a group of polymeric organosilicon compounds that are commonly referred to as silicones.[1] PDMS is the most widely used silicon-based organic polymer, and is particularly known for its unusual rheological (or flow) properties. PDMS is optically clear, and, in general, is considered to be inert, non-toxic and non-flammable. It is occasionally called dimethicone and is one of several types of silicone oil (polymerized siloxane). Its applications range from contact lenses and medical devices to elastomers; it is present, also, in shampoos (as dimethicone makes hair shiny and slippery), food (anti-foaming agent), caulking, lubricating oils, and heat-resistant tiles.

The chemical formula for PDMS is CH3[Si(CH3)2O]nSi(CH3)3, where n is the number of repeating monomer [SiO(CH3)2] units. Industrial synthesis can begin from dimethylchlorosilane and water by the following net reaction:

During polymerization, this reaction evolves potentially hazardous hydrogen chloride gas. For medical uses, a process was developed in which the chlorine atoms in the silane precursor were replaced with acetate groups, so that the reaction product of the final curing process is nontoxic acetic acid (vinegar). As a side-effect, the curing process is also much slower in this case. This is the chemistry used in consumer applications, such as silicone caulk and adhesives.

The polymer is manufactured in multiple viscosities, ranging from a thin pourable liquid (when n is very low), to a thick rubbery semi-solid (when n is very high). PDMS molecules have quite flexible polymer backbones (or chains) due to their siloxane linkages, which are analogous to the ether linkages used to impart rubberiness to polyurethanes. Such flexible chains become loosely entangled when molecular weight is high, which results in PDMS' unusually high level of viscoelasticity. 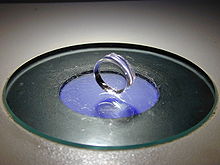 Hardened PDMS cylinder on the glass of a stereomicroscope light.

PDMS is viscoelastic, meaning that at long flow times (or high temperatures), it acts like a viscous liquid, similar to honey. However, at short flow times (or low temperatures), it acts like an elastic solid, similar to rubber. In other words, if some PDMS is left on a surface overnight (long flow time), it will flow to cover the surface and mold to any surface imperfections. However, if the same PDMS is rolled into a sphere and thrown onto the same surface (short flow time), it will bounce like a rubber ball.

Although the viscoelastic properties of PDMS can be intuitively observed using the simple experiment described above, they can be more accurately measured using dynamic mechanical analysis. This involves using a specialized instrument to determine the material's flow characteristics over a wide range of temperatures, flow rates, and deformations. Because of PDMS's chemical stability, it is often used as a calibration fluid for this type of experiment.

The shear modulus of PDMS varies with preparation conditions, but is typically in the range of 100 kPa to 3 MPa. The loss tangent is very low (tan δ ≪ 0.001).[2]

After polymerization and cross-linking, solid PDMS samples will present an external hydrophobic surface.[3] This surface chemistry makes it difficult for polar solvents (such as water) to wet the PDMS surface, and may lead to adsorption of hydrophobic contaminants. Plasma oxidation can be used to alter the surface chemistry, adding silanol (SiOH) groups to the surface. This treatment renders the PDMS surface hydrophilic, allowing water to wet (this is frequently required for water-based microfluidics). The oxidized surface resists adsorption of hydrophobic and negatively charged species. The oxidized surface can be further functionalized by reaction with trichlorosilanes. Oxidized surfaces are stable for ~30 minutes in air, after a certain time hydrophobic recovery of the surface is inevitable independently of the surrounding medium whether it is vacuum, air, or water.[4]

Many people are indirectly familiar with PDMS because it is an important component in Silly Putty, to which PDMS imparts its characteristic viscoelastic properties.[6] The rubbery, vinegary-smelling silicone caulks, adhesives, and aquarium sealants are also well-known. PDMS is also used as a component in silicone grease and other silicone based lubricants, as well as in defoaming agents, mold release agents, damping fluids, heat transfer fluids, polishes, cosmetics, hair conditioners and other applications. PDMS has also been used as a filler fluid in breast implants, although this practice has decreased somewhat, due to safety concerns.

Activated dimethicone, a mixture of polydimethylsiloxanes and silicon dioxide (sometimes called simethicone), is used in over-the-counter drug as an anti-foaming agent and carminative.[7][8]

As a food additive, it has the E number E900 and is used as an anti-foaming agent and an anti-caking agent.[citation needed] This silicone can be found in many processed foods and fast food items such as McDonald's Chicken McNuggets [9] and Wendy's French fries [10]

PDMS is commonly used as a stamp resin in the procedure of soft lithography, making it one of the most common materials used for flow delivery in microfluidics chips. The process of soft lithography consists of creating an elastic stamp, which enables the transfer of patterns of only a few nanometers in size onto glass, silicon or polymer surfaces. With this type of technique, it is possible to produce devices that can be used in the areas of optic telecommunications or biomedical research. However, this process still cannot be used for the industrial production of electronic components. In fact, the patterns are obtained by the process of stamping thanks to a shape (or stamp). This stamp is produced from the normal techniques of photolithography or electron-beam technology. The resolution depends on the mask used and can reach 6 nm.[11]

In Bio-MEMS, soft lithography is used extensively for microfluidics in both organic and inorganic contexts. Silicon wafers are used to design channels, and PDMS is then poured over these wafers and left to harden. When removed, even the smallest of details is left imprinted in the PDMS. With this particular PDMS block, hydrophilic surface modification is conducted using RF Plasma techniques. Once surface bonds are disrupted, usually a piece of glass slide is placed on the activated side of the PDMS (the side with imprints). Once the bonds relax to their normal state, the glass is permanently sealed to the PDMS, thus creating a waterproof channel. With these devices, researchers can utilize various surface chemistry techniques for different functions creating unique lab-on-a-chip devices for rapid parallel testing.

PDMS can be cross-linked into networks and is a commonly used system for studying the elasticity of polymer networks.[citation needed] PDMS can be directly patterned by surface-charge lithography.[12]

PDMS is used variously in the cosmetic and consumer product industry as well. For example, PDMS can be used in the treatment of head lice[13] and dimethicone is used widely in skin-moisturizing lotions where it is listed as an active ingredient whose purpose is "skin protection." Some cosmetic formulations use dimethicone and related siloxane polymers in concentrations of use up to 15%. The Cosmetic Ingredient Review's (CIR) Expert Panel, has concluded that dimethicone and related polymers are "safe as used in cosmetic formulations."[14] PDMS in a modified form is used as an herbicidal penetrant[15] and is a critical ingredient in water-repelling coatings, such as Rain-X.

PDMS is also used in analytical chemistry as a component of some types of SPME fibers.

PDMS has been used in the aerospace industry as a heat tile on reentry vehicles.[16]