Seattle, Washington, supports a multitude of media, from long-established newspapers, television and radio stations to a continually evolving panoply of smaller, local art, culture, neighborhood and political publications, filmmaking and, most recently, Internet media. As of the fall of 2009, Seattle has the 20th[1] largest newspaper and the 13th largest radio[2] and television[3] market in the United States. The Seattle media market also serves Puget Sound and Western Washington.

Seattle has been at the verge of new media developments for the past decade. In 1999 the protesters of a meeting of the World Trade Organization in Seattle spurred the formation of the city's Independent Media Center, which covered and disseminated the breaking news online to a worldwide audience. The location of Microsoft just outside Seattle in nearby Redmond, WA, and the growth of numerous interactive media companies have given Seattle the advantage of benefiting from new media innovations, so it is not surprising that Seattle media in the 21st century is notable for being at the forefront of digital media.[4] 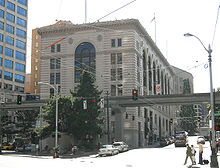 The old Seattle Times building in downtown Seattle is on the National Register of Historic Places.

Seattle's major daily newspaper is the Seattle Times. The local Blethen family owns 50.5% of the Times,[5] the other 49.5% being owned by the McClatchy Company.[6] The Seattle Post-Intelligencer (now online only) is owned by the Hearst Corporation.[7] The Seattle Daily Journal of Commerce covers economic news, and The Daily of the University of Washington, the University of Washington's school paper, is published five days per week during the school year.

The Seattle newspaper landscape changed dramatically in 2009, when The Seattle Post-Intelligencer ceased print publication. Previously, the Post-Intelligencer and The Seattle Times had shared a joint-operating agreement under which The Times handled business operations outside the newsroom for its competitor. When the Post-Intelligencer went online-only as SeattlePI.com, The Seattle Times felt the blow financially but continues to be a profit-earning publication and even increased its print circulation in 2009 by 30 percent. Nonetheless, the P-I's move to online-only resulted in 145 jobs lost at that publication, while The Seattle Times cut 150 editorial positions shortly before that, in December 2008.The Times reaches 7 out of 10 adults in King and Snohomish Counties. With fewer resources, the Times took steps to consolidate some of its news coverage: for example, folding the daily business section into the paper's A section. The Seattle Times has been recognized for its editorial excellence: The newspaper has been the recipient of eight Pulitzer Prizes. In recent years, The Times has begun to partner with other types of media outlets, including collaborations with several local bloggers that are funded by American university's J-Lab: The Institute for Interactive Journalism and the John S. and James L. Knight Foundation.[4]

The most prominent weeklies are the Seattle Weekly and The Stranger. Both consider themselves alternative papers. The Stranger, founded in 1992, is locally owned and has a younger and hipper readership. The Seattle Weekly, founded in 1976, has a longstanding reputation for in-depth coverage of the arts and local politics. It was purchased in 2000 by Village Voice Media, which in turn was acquired in 2005 by New Times Media. New Times Media has decreased the Weekly's emphasis on politics.[8][9] Other weekly papers are the Seattle Gay News and Real Change, an activist paper sold by homeless and low-income people. The Puget Sound Business Journal covers the local economy. The Rocket, a long-running weekly paper devoted to the music scene, stopped publishing in 2000. 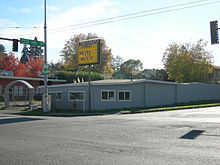 Headquarters of The Facts.

Seattle is also home to several ethnic newspapers. Among these are the African American papers The Facts and the Seattle Medium; the Asian American papers the Northwest Asian Weekly, Seattle Chinese Post, and the International Examiner; and the JTNews (formerly the Jewish Transcript). There are also numerous neighborhood newspapers, such as the Seattle Sun and Star, the West Seattle Herald, the Ballard News-Tribune, North Seattle Journal, and the papers of the Pacific Publishing Company, which include the Queen Anne News, Magnolia News, North Seattle Herald-Outlook, Capitol Hill Times, Beacon Hill News & South District Journal, and the Madison Park Times.

The Seattle-based online magazines Worldchanging and Grist.org were two of the "Top Green Websites" in 2007, according to Time.[10]

The Seattle television market is the 13th largest in the United States;[11] and additional viewers from British Columbia, Canada (Vancouver and its surrounding area on broadcast and cable).

Seattle is served by numerous television stations. The major network affiliates are KOMO 4 (ABC), KING 5 (NBC), KIRO 7 (CBS), KCTS 9 (PBS) and KCPQ 13 (Fox), which are also seen across Canada via digital cable and satellite providers. Also broadcasting in English are KSTW 11 (The CW), KONG 16 (Independent), KTBW 20 (TBN), KZJO 22 (MyNetworkTV), KBTC 28 (PBS), KVOS 12, KWPX 33 (ION).[12] Most of these can be seen in Canada via digital cable or satellite. There are also two Spanish-language stations: KUNS 51 (Univision) and KFFV 45 (Azteca America).

Seattle's commercial TV stations distinguish themselves from one another in various ways. KING 5, owned by the Belo Corporation, has been nominated for 56 Regional Emmy Awards. The station allows viewers to submit their own photo and video content via its website and also highlights the work of average citizens in the community on-air in the recurring feature, "Home Team Heroes." The parent company of KOMO, Fisher Communications, launched a network of hyperlocal websites in 2009, which include blogs about issues related to community service, news of interest to families, crime news, and news about events occurring around the neighborhood. Finally, KIRO, owned by Cox Communications, maintains three reporters in a Washington, DC, bureau to cover news of interest to viewers back in Washington State.[4]

Seattle also has three public television stations. The Seattle Channel, Government-access television (GATV) run by the city, airs public affairs, community service, and arts programming. The station is funded partly by Cable television franchise fees and partly by a $5 million grant from Comcast, which will be paid over 10 years to support arts programming. After first focusing on civic programming, the Seattle Channel has become known for its arts programming. As the station's on-air priorities have begun to emphasize arts programs, it has shifted much of the government accountability-oriented programming to live streaming on the Internet, best accessed by viewers with high-speed Internet access. KCTS 9 is Seattle's PBS affiliate and operates three strands: a primary, high-definition, general interest station; KCTS 9 V-ME, which serves that Spanish-speaking community; and KCTS 9 Create, which features DIY, cooking, arts and crafts, and travel programs. In 2009 KCTS aired 160 episodes in a regularly occurring series on local public affairs, personal finance, economic issues, and business affairs. While KCTS is a popular source for viewing nationally-produced PBS shows, it features less programming on local public affairs than the region's other two public TV stations. The third public station, SCAN, is Seattle's Public-access television cable TV network. A 501(c)3 nonprofit, it provides equipment, production facilities, and media instruction for residents of Seattle and other King County communities. Although its funding is limited, SCAN often airs more locally-produced public affairs programming each week than all the city's broadcast networks combined.[4] 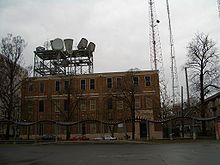 Seattle has the thirteenth largest radio market in the United States,[2] though this ranking does not take into account Canadian audiences. The radio market stretches across Puget Sound and Western Washington. The Seattle PI ran an article[13] in February 2010 about the start of the radio industry in Seattle.

Coverage of news and public affairs across Seattle's radio dial is inconsistent. KIRO (97.3 FM), which has a newsroom of 30 people, airs 34 hours of news programming per week, with a primary focus on local reporting; counting news analysis segments and related programming, this reaches 91 hours per week. KOMO-AM (97.7 FM) airs news and commentary 24 hours per day, 7 days per week. Kris Bennett Broadcasting, a trio of stations serving the black community, airs 5 hours of local talk radio programming each week.[4]

Many Seattle radio stations are also available through internet radio, with KEXP being the first radio station to offer real-time playlists, broadcast uncompressed CD quality music over the internet 24 hours a day, and offer internet archives of its shows (Podcasts).[15] Hollow Earth Radio is also online-only and emphasizes local artists outside the mainstream music scene.[4]

Seattle's first significant foray into Internet media came along with Indymedia,[16] a co-op started in 1999 that has since spread to many cities around the world. In the decade since the founding of Indymedia, all of the city's mainstream media outlets have established or augmented their online presence, and numerous blogs have sprung up to supplement traditional media. The city hit another first when the Seattle Post-Intelligencer became the first online-only newspaper in the nation, and as SeattlePI.com, that outlet has experimented with its growth by adding reader blogs and neighborhood-focused blogs. The P-I first began experimenting with blog-driven community engagement with the "Big Blog," a local news blog whose founding reporter used to hold regular public meet-ups with Seattle residents, a practice now embraced by other local bloggers, as well.[4]

Across the Seattle region, 43% of adults read news online on a regular basis and another 21% read or contribute to blogs.[17] In addition to blogs, other online media outlets that offer wider-ranging coverage include Crosscut,[18] started by Seattle Weekly founder David Brewster, Publicola.net, Investigate West & Seattle Post Globe. Sea Beez, a content-sharing online portal for ethnic media outlets, is in the process of launching a local news site.[19]

Seattle is served by a number of online media outlets: The City of Seattle Information Technology department identified 260 websites focused on Seattle's local neighborhoods and communities, including non-traditional, linked news and information outlets.[4] Much of this online activity is driven by the rich hyperlocal news scene in the city, which has seen an exponential growth this past decade. This has been led in the area by sites such as westseattleblog.com[20] and myballard.com,[21] but also old media companies such as KOMO.[22] There's a pair of articles here[23] and here[24] covering the ad scene for hyperlocal in January 2010.

Seattle's online hyperlocal media vary greatly in terms of web traffic, scope, and resources. Some sites are run by journalists first trained in traditional media, such as Next Door Media, a network of 10 neighborhood blogs that nets a combined 1 million page views per month. (By comparison, SeattleTimes.com and SeattlePI.com average 45 million and 40 million monthly page views, respectively.) Capitol Hill Seattle, another popular hyperlocal blog, commands 200,000 monthly page views, and West Seattle Blog, 900,000. Despite varied audiences, a content analysis conducted by the New America Foundation found that online media are filling gaps in news coverage left by traditional media. The study looked at Capitol Hill Seattle, West Seattle Blog, My Ballard, Wallyhood, SeattlePI.com, and SeattleTimes.com, and found that the first four sources (all hyperlocal blogs) devoted a greater percentage of their news coverage to issues specific to Seattle's neighborhoods. SeattleTimes.com and SeattlePI.com, on the other hand, covered more metro, national, and international news. The blogs devoted a greater percentage of their coverage to the combined subjects of politics, health, education, employment, social services, and arts and entertainment.[4]

The background to Seattle's extensive coverage on the Internet is the city's history of flourishing alternative media, ranging from small presses to low power FM radio broadcasting. The independent, volunteer-run KRAB-FM radio, a high powered station that operated on 107.7 MHz in the regular broadcast band, influenced a generation of listeners during the 1960s and 1970s. Later, before Internet radio became practical, a number of very low power, microradio FM stations broadcast on the few FM frequencies not allocated to high power stations. Currently, FCC deliberations and rulings about Internet radio are followed not only by Internet entrepreneurs, but also by those Seattleites who produced and listened to local radio as well as by those who produce and read the numerous local print publications.

A number of movies have been set or filmed in the Seattle area (although many were actually filmed in Vancouver), including: