KING-TV, virtual channel 5, is a television station in Seattle, Washington, affiliated with the NBC network. Owned by Belo Corporation, it broadcasts on UHF digital channel 48. Its offices and broadcasting center are located just east of Seattle Center. The station's transmitter is located in the Queen Anne neighborhood of Seattle.

The station is operated in a duopoly with independent station KONG-TV, which features syndicated programs and news programming some produced by KING-TV; KONG is available on UHF channel 16, but on most Seattle cable systems is given the Channel 6 channel slot to compliment KING-TV. KING-TV carries Universal Sports on digital subchannel 5.2, which is also available on digital cable in northwestern Washington State. It is one of five local Seattle TV stations seen in Canada on the Bell TV and Shaw Direct satellite providers. KING is carried on several cable systems in south-eastern Alaska and Northwestern Oregon.

Syndicated programs broadcast on KING-TV include , Dr. Phil, Anderson, The Ellen DeGeneres Show, and Inside Edition.

KING-TV began transmitting its scheduled programming in digital only on June 12, 2009 as mandated by the FCC.[1] However KING-TV has continued its analog signal as part of the FCC's "Nightlight" program, running a DTV transition guide for two more weeks.[2]

When Channel 5 first came on the air as KRSC-TV on November 25, 1948, it became the first television station in the Pacific Northwest. The first broadcast was a live remote of a Thanksgiving Day high school football game and was plagued with technical difficulties, but local viewers reported being impressed nonetheless.[citation needed] After eight months on the air under the ownership of P.K. Lieberman's Radio Sales Corporation, Channel 5 was purchased by Seattle native Dorothy Bullitt's King Broadcasting Company, owners of KING radio (AM 1090, now KPTK; and FM 98.1). The station became KING-TV to match its radio sisters (Bullitt purchased the KING call letters while on a fishing boat). For many years, the stations' logo was King Mike, an anthropomorphized microphone in ermine robes and a crown, drawn by Walt Disney. Sister stations KGW-AM-FM-TV in Portland, Oregon used a similar logo, called Pioneer Mike. The KRSC-TV call sign now resides on an independent educational station in Claremore, Oklahoma.

Channel 5 was a primary CBS affiliate, carrying secondary affiliations with NBC, ABC and (until 1956) DuMont Television Network. Once the Federal Communications Commission (FCC)-imposed freeze on TV licenses was rescinded in the early 1950s, KING-TV lost its monopoly on the Seattle TV market. It lost CBS to KTNT-TV (now KSTW-TV, KIRO-TV picked up CBS in 1958) and NBC decamped first to KMO-TV (now KCPQ-TV) and then a few months later to KOMO-TV in 1953, leaving KING with the poorly performing ABC. Bullitt lobbied NBC for affiliation and in 1959 NBC pulled its affiliation from KING's cross-town rival KOMO and granted it to KING.

In 1961, Dorothy Bullitt's son Stimson Bullitt became president of the King Broadcasting Company, while his mother remained chairwoman of the board. In 1966, he took the almost-unprecedented step of airing an anti-Vietnam war editorial, angering the Johnson Administration. Stimson also expanded the company to include Seattle Magazine and a variety of other businesses, much to the dismay of his mother, who felt he was losing focus on the family's broadcast properties. Investigative reporter Don McGaffin gave significant coverage to growing racial tensions in the city as well as corruption in the Seattle Police Department.

Dissatisfied with Stimson Bullitt's management style, Dorothy Bullitt, and Mr. Bullitt's sisters, arranged for his voluntary resignation from King Broadcasting in 1972. Stimson sold his company shares to his sisters, Harriet and Patsy. He then received control of the family's real estate interests. Ancil Payne, who had served as general manager of the company's Portland stations since 1965, became president and CEO. By the 1970s and 1980s, KING-TV was the flagship of a growing regional media empire which at various times included ventures in publishing, the film industry, cable television and even various timber assets in the Far East.

Bonneville International Corporation purchased KING-AM in 1994 and changed the station's call letters to KINF (later KNWX) and switched to an all-news format. KNWX switched frequencies with KRPM 770 a year later, transferring ownership of the 1090 frequency allocation to EZ Communications, Inc. Since late 2004, CBS Radio-owned KPTK 1090 is home of Air America Radio. KING-FM was donated to a non-profit partnership of the Seattle Symphony, the Seattle Opera, and ArtsFund. It continues the classical music format started by Dorothy Bullitt and is one of the few remaining commercial classical radio stations in the nation today. The station is scheduled to become a non-commercial public radio station by July 2011.

The 1990s saw the end of Almost Live!. During this decade, the show launched the career of Bill Nye the Science Guy, Joel McHale (of The Soup fame) and locally, Pat Cashman and John Keister (who replaced Ross Shafer as host). KING-TV was also the home for Watch This!, KING 5's Emmy Award-winning fast-paced show for teens and children. The show lasted five years and was hosted by local anchors, Jim Dever and Mimi Gan.

On December 18, 1995, King Broadcasting launched Northwest Cable News, a 24-hour regional cable news operation available to cable television viewers primarily in Washington, Oregon, and Idaho with lesser viewership in Alaska, Montana and California. In the Seattle area NWCN is located on Comcast Channel 2 or WAVE Broadband Channel 54. King Mike, the original logo, was brought back for KING's 50th anniversary in 1998 and still appears in promotional announcements.

The station also has the distinction of having the longest-serving numeric logo in the Seattle market- the 'K5' logo with three dots over the "K" (representing a crown, like a king's crown, hence the call letters) having been in use since 1977, with the current italicized version first used in 1998 (during the 1980s, the "5" in the K5 was also seen by itself at times). The "K" part of the logo also served as King Broadcasting's corporate logo.

KING is the official home of Seattle Seahawks preseason games, except those on national television, unless they are on NBC, in which case KING will carry the game, but will not produce it, deferring the duties to the network. 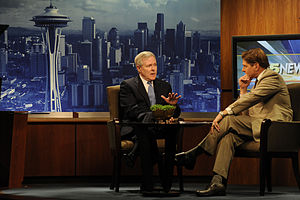 A morning news interview with the Secretary of the United States Navy Ray Mabus.

For most of the last quarter-century, KING has waged a spirited battle for first place in the Seattle news race with KOMO. However, for the past couple of years, KING has been in first place in virtually every local newscast. Some of its newscasts rank higher than all the other newscasts combined.

From the beginning KING was deeply committed to the Seattle area. Bulitt believed that a television station should serve the local public while remaining commercially viable. KING set up one of the first local news departments in the country and quickly gained national attention for its high quality and thorough approach. In 1952, KING kept Senator Joseph McCarthy from delivering a potentially libelous attack on the air. McCarthy threatened to have the station's license pulled citing undue bias (the Bulitts were staunch Democrats) but was forced to back down. Reporters such as Charles Herring, Ted Bryant, Mike James, Bob Faw and Seattle's first female news anchor, Jean Enersen, set high standards for television journalism in Seattle. KING-TV continues to be the leading station in the area.[citation needed]

After Alaska was hit by a major earthquake in March 1964, KING-TV worked with NBC News to get the footage of the quake's aftermath broadcast on the network. This was prior to the launch of a trans-Pacific television broadcast satellite and footage from Anchorage was flown to Seattle and driven to KING to be fed into the NBC network. NBC was the first network to show footage of the quake's aftermath preceding ABC and CBS by several hours.

KING-TV was a pioneer of diversity in the newsroom. In 1972, KING-TV broke new ground by appointing Jean Enersen as an evening news anchor. According to the Washington Post, Enersen was the first permanent female evening news anchor in the country and is considered to be the longest-running female local evening news anchor.[4] Additionally, KING-TV appointed Seattle's first African-American evening news anchor, John Raye, who co-anchored with Enersen for several years in the mid-1970s. During this time the KING-TV news department also groomed several network news reporters, including CNN's Aaron Brown and Lou Dobbs, CBS Early Show contributor Hattie Kauffman and NBC correspondent James Hattori. Future meteorologist and author Jeff Renner joined KING-TV in 1977. Also during this era, KING's staff of photojournalists were among the best in the nation. The National Press Photographers Association named KING the Television News Photography Station of the Year for 1979, 1981 and 1982.[5]

KING was a pioneer with new types of newscasts. In 1979, KING debuted the first early morning newscast in Western Washington at 6:30 a.m., anchored by Don Madsen with Larry Schick as weather anchor; Don Madsen was known for coming in at 11:30 p.m. and working all night to prepare for his early morning newscast. The KING 5 Morning News became very popular with Western Washington viewers as well as viewers throughout British Columbia. In 1984, KING pioneered Top Story, hosted by Mike James and Lori Matsukawa, which aired at 6:30 p.m. weeknights; Top Story was a local version of Nightline focusing primarily on the top news story of the day with in-depth reporting and interviews. Despite efforts to produce a high-quality newscast, Top Story never became popular and was canceled in 1988.

In the late 1970s, KING-TV and its sister stations in Spokane, Boise, and Portland formed the KING Northwest Network. They often shared news reports during and jointly covered significant stories such as the eruption of Mt. St. Helens in 1980. The mid-morning talk show, Seattle Today, was re-named Northwest Today and expanded to 90 minutes. While the majority of the show was produced in Seattle, each member station had a local host who would provide short local segments.

In 1999, to compete against KOMO, KING began providing high definition newscasts; at the time it only had one studio camera that was HD-capable. In April 2007, KING upgraded all of its studio cameras, graphics and weather system to high definition, and began broadcasting its public affairs programming in the format as well."HDTV - KING5.COM". http://www.king5.com/HD/.  Field reports are still standard-definition (480i converted to 1080i HD for air) but are taped in a 16x9 aspect ratio, giving the appearance of high-definition. According to KING, it is "Seattle's First HD Newscast".[6] On April 16, 2007, KING 5 also started using the tagline "KING 5 HD" when referring to the station.

In 2008, chief newscaster Jean Enersen celebrated her 40th year at KING (36 of those years as primary evening anchor—the longest serving female evening anchor in the country) with a 1-hour special which aired August 1. Recently, she stated in the Seattle Times that she has no plans to retire anytime soon.

This film, television or video-related list is incomplete; you can help by expanding it with reliably sourced additions.