The Hand That Rocks the Cradle (film)

The Hand That Rocks the Cradle (film)

Infobox_Film
name = The Hand That Rocks the Cradle 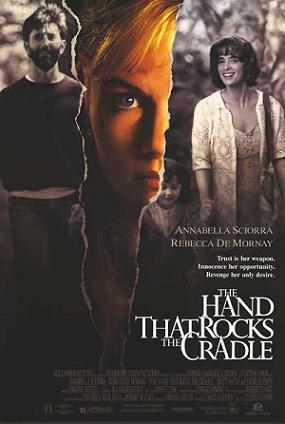 "The Hand That Rocks the Cradle" is a 1992 thriller starring as a vengeful out to destroy a naïve woman and steal her family. The film was directed by . The original music score was composed by .

stars as Claire Bartel, a woman who at the beginning of the film is pregnant with her second child. Claire is molested by her obstetrician, Dr. Victor Mott (played by ), on a routine checkup. After Claire tells her husband Michael (played by Matt McCoy) about being sexually violated, the couple decide to confront the authorities regarding the incident. More women come forward to corroborate the Bartels' story. Feeling that his career is over, Dr. Mott commits in his home when he hears about the possibility of s and with them, possible imprisonment as a .

After Dr. Mott's funeral, Mrs. Mott (De Mornay) is under considerable stress having suddenly lost her husband and facing the prospect of having her baby alone. When she learns that all of her husband's assets have been frozen and that she must move out of her husband's house, she miscarries her child, with complications resulting in an emergency . While recovering in the hospital, Mrs. Mott sees Claire Bartel's picture on the local news, Claire having been identified as the first woman to come forward with allegations against Dr. Mott. Mrs. Mott then begins planning her revenge.

Six months later, Claire has since given birth to her son, Joey. The Bartels have hired Solomon (played by ), a mentally handicapped worker placed by the "Better Day Society" to perform some handiwork (for example, building a new picket fence) around the house. One morning, Claire is running after her daughter Emma's (played by ) school bus because she forgot to give Emma her jacket. Luckily, the school bus is stopped by Mrs. Mott, now using the alias Peyton Flanders. Peyton asks Claire if she knows where the Bartels live, and Claire responds that she is Claire Bartel. Peyton says she'd heard that the Bartels were looking for a nanny, and Claire agrees to interview her on the spot.

Of course, Peyton turns out to be the perfect candidate for the Bartels' new nanny. She is hired after deliberately placing the back of one of Claire's earrings (which was constantly falling off) into baby Joey's mouth and feigning the baby's rescue from potentially choking.

The night Peyton moves in, she slips into Joey's room, apparently intending to smother him with a pillow. But after looking at him and thinking of the child she lost, she instead breast-feeds Joey, who, thereafter, will not take to his own mother's milk.

Claire and Michael then have a dinner date with friends Marlene (played by ) and Marty Craven. Peyton notices a sexy red dress that Claire is wearing lying on the bed and unknown to Claire, she decides to ruin it by rubbing a perfume stain on it, forcing Claire to wear a far less attractive dress. Marlene tells Claire that she should never let another woman take such a powerful position within her home. She then utters the line, "The hand that rocks the cradle is the hand that rules the world." The line is part of a poem by .

Claire supposedly misplaces an important proposal of Michael's that was supposed to be sent via . What really happened is that Peyton stole it out of Claire's purse and destroyed it. When she can't find the proposal, she has an attack, and Peyton realizes she can use this to her advantage.

Later, Peyton catches Solomon looking at her while breast-feeding Joey. In order to get rid of him, Peyton plants a pair of Emma's panties in his utility cart and tells Claire that she has observed some behavior that seems inappropriate between Solomon and Emma. Claire finds the planted panties while looking for batteries for Joey's baby monitor, which Peyton says has "conked out". Solomon is subsequently fired (for allegedly "touching" Emma), and Emma asks Peyton what happened. Peyton tells her that "Mommy doesn't want him around anymore". Emma, who has grown close to Peyton during this time, responds with "I hate her."

Peyton decides to throw a surprise party for Claire's birthday, given that Claire has not been "herself" lately, and was feeling down since losing the proposal. Michael agrees and Peyton suggests letting Marlene help plan the party, knowing that Michael and Marlene were each other's "first" (information that she gleaned from Emma).

Peyton steals Marlene's lighter out of her purse after Marlene and Claire have lunch. Later, Peyton plants it in Michael's coat pocket. When Michael meets Marlene for dinner, Peyton goads Claire on, saying, "I wonder where Michael is." Claire calls Michael's lab, but he, of course, is nowhere to be found.

Claire then finds Marlene's lighter in Michael's coat pocket when taking the coat to the cleaners. Claire rushes home and accuses Michael of infidelity, screaming that he's been "fucking Marlene" the whole time. As Peyton planned, she does this while her living room is full of people — it's her surprise party, which is now ruined.

After Peyton overhears Michael and Claire talking about taking a trip as a family (without Peyton), Peyton gets even more psychotic. She plans Claire's murder by waking up at dawn and propping open Claire's greenhouse windows with a shovel.

Meanwhile, Marlene, a real estate agent, has discovered Dr. Mott's house listed for sale, and the windchimes hanging off the balcony just happen to be the same windchimes Peyton gave Claire upon her arrival at the Bartel house. Marlene, frantic, rushes over to the Bartel house to warn Claire. Peyton, having been unmasked as Dr. Mott's widow, tells Marlene that Claire is in the greenhouse. Marlene rushes out to the greenhouse and opens the door, sealing her doom as glass falls from the rigged greenhouse ceiling, killing her.

Peyton then empties all of Claire's medicinal inhalers while Claire is at the botanical gardens. She then takes Joey for a walk. When Claire returns and sees Marlene's dead body, she has a severe asthma attack and collapses unconscious.

After recuperating, Claire finds the urgent phone message from Marlene in the pocket of the jeans she was wearing the day Marlene was killed. While in hospital, Peyton redecorates baby Joey's room. Claire goes to Marlene's office and inquires as to what Marlene was doing on that morning. She discovers the Mott house listing and goes to the house. Upon touring the house with the realtor, she realizes that Peyton is Mrs. Mott, after seeing the nursery in the Mott house is identical to hers.

Claire returns home to find Michael and Peyton preparing dinner. Claire walks up to Peyton, stares at her for a few seconds, then punches her square on the nose, knocking Peyton over backwards, across a table, and onto the floor. Michael exclaims "Claire! My God!". Claire tells Michael that Peyton is Dr. Mott's widow. Peyton tells Michael he must "Tell her about us" in an attempt to dupe Claire, but Michael orders Peyton to leave the house.

While pretending to leave, Peyton re-enters the house and hits Michael with a shovel, causing him to fall and break his legs. Emma takes Joey to the attic, where a waiting Solomon is there to help. Peyton comes up to the attic to discover Solomon helping Emma out of the window; Solomon then grabs Joey before Peyton gets to him. While Peyton is demanding Solomon give Joey to her, Claire enters demanding Peyton leave them alone. Peyton moves to hit Claire, upon which Claire fakes an asthma attack. When Peyton turns her back and begins hitting Solomon with a fireplace poker, Claire lunges at Peyton, pushing her through a window, where she falls off the roof to her death, impaled by the picket fence that Solomon built.

* The movie takes place in .
* After Claire discovers who Peyton really is, her husband calls the police. He reports the address as "808 Yakima". This is the actual street address of the house in which most of the movie was filmed.