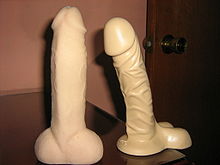 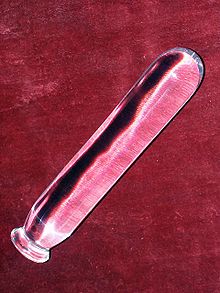 The phrase "Dil Doul", referring to a man's penis, appears in the 17th century folk ballad "The Maids Complaint for want of a Dil Doul".[6] The song was among the many in the library of Samuel Pepys.

In February 2008, a federal appeals court overturned a Texas statute banning the sales of dildos and other sexual toys, deeming such a statute as violating the Constitution's 14th Amendment on the right to privacy.[17] The appeals court cited Lawrence v. Texas, where the U.S. Supreme Court in 2003 struck down bans on consensual sex between gay couples, as unconstitutionally aiming at "enforcing a public moral code by restricting private intimate conduct." Similar statutes have been struck down in Kansas and Colorado. As of 2009, Alabama is the only state where a law prohibiting the sale of sex toys remains on the books.[citation needed]

Some Conservative Christians believe that the use of sex toys is immoral and prohibited by The Bible.[citation needed] American Baptist preacher Dan Ireland has been an outspoken critic of such devices and has fought to ban them on religious and ethical grounds.[citation needed] According to Ireland, "Sometimes you have to protect the public against themselves....These devices should be outlawed because they are conducive to promiscuity, because they promote loose morals and because they entice improper and potentially deadly behaviors."[18] Ireland believes that "there is no moral way to use one of these devices."[18] 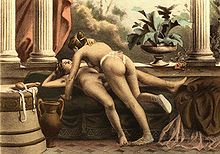 They are mentioned several times in Aristophanes' comedy of 411 BC, Lysistrata.

She eventually discovers the maker to be a certain Kerdon, who hides his trade by the front of being a cobbler, and leaves to seek him out.

To act with young boys is loving without men.
What will not poor forsaken women try?
When man's not near, the Signior must supply.[25]

PVC and jelly-rubber toys have often been found to be problematic because they contain unsafe phthalates, softeners added to many plastics that are also found in some jewelry, food containers, and other soft rubber toys. Phthalates have been linked to health problems such as cancer and prenatal defects. Products made of PVC or jelly rubber cannot be sterilized. Manufacturers recommend using condoms with these toys if users share them.