Royal Military College (RMC) Saint-Jean is a Canadian military academy located on the site of Fort Saint-Jean (Quebec), originally built 1666, which is now part of the town of Saint-Jean-sur-Richelieu, Quebec, 40 km south of Montreal, Quebec. It is the arm of the Canadian Military College system that ensures the smooth transition of selected Cadets from high school to university education by providing pre-university and college-level programs. The programs are harmonized with those at the Royal Military College of Canada (RMC). The four components of achievement are Academics, Leadership, Athletics and Bilingualism. RMC Saint Jean offers a low teacher-student ratio, a physical fitness programme, teaching, and leadership activities. The college has clubs, an intramural sports programme and recreational facilities.

Corresponding to the first two years of collegial (CEGEP) studies in Quebec, preparatory year is a pre-university program of studies. Intended for students who have obtained their high-school certificates in Quebec or the equivalent elsewhere in Canada, the program prepares students to continue their studies at the Royal Military College of Canada in Kingston, Ontario.

About 200 students per year will be able to receive training at RMC Saint-Jean in a two-year, general military, College of General and Professional Education (CEGEP) diploma program:

Although the college does not offer university-level courses as it did before 1995, credits can be applied to programs at the Royal Military College of Canada or other universities. So that students can move seamlessly from one to the other, the academic programs at the two institutions will be harmonized. At the end of the first or preparatory year, students who opt for the “General” program (science, arts, business) will stay on at CMR for another year. Students studying engineering will go to Kingston, Ontario into the first year at RMC.[3]

At its campus in Saint-Jean-sur-Richelieu the Royal Military College of Canada offers a pre-university program admitting up to 140 students per year. The preparatory year ("prep year") cadets acquire the necessary academic standard needed to attend RMC. Although the program is intended mainly for students from Quebec, the preparatory year is open to students from Canada who need to upgrade their studies before beginning university courses. The academic function of CMR is to educate its cadets up to the second year of a college degree. The remaining studies are to be completed at the RMC in Kingston.

In preparation for continued university studies at RMC, students select either the Social Sciences programme (for students pursuing degree in Arts) or the Science programme (for students pursuing a degree in Engineering or Science). Each programme is offered in both official languages. The two programmes share core courses: four in Literature; three in Philosophy; two in Second Language Studies; three in Physical Education. These core courses are supplemented with courses specific to each programme.

The preparatory year students register in either the social sciences or science program. The programs are offered in both official languages. The social sciences program features courses in sociology, history, political science, mathematics, computer science, chemistry and physics. The sciences program includes courses in: mathematics, physics, chemistry, computer science, and history. The core courses in both programs include: literature, philosophy, second language, and physical education.

The mandate of the preparatory year is to develop in its students good work habits, academic diligence, critical facility, and team spirit.[5]

Awards are granted to outstanding cadets:

Founded in 1966, the mission of the Canadian Forces Management Development School (CFMDS) is to apply management and leadership training and consultation to the defence team. The CFMDS is housed at the RMC Saint-Jean.[9]

The Non-Commissioned Members Professional Development Centre (NCMPDC) was created on 1 April 2003 and is located at Campus St-Jean. The courses that are offered at the centre are the Intermediate Leadership Qualification (ILQ), the Advanced Leadership Qualification (ALQ) and finally the CPO1/CWO Chief Qualification (CQ). All courses include both distance learning and a residential portion. The distance learning portion lasts 9 or 10 weeks depending on the course and allows the candidates to remain with their respective units. These courses also prepare the candidates for the residential portion which last three weeks and takes place on the RMC Saint-Jean site.[10]

The NCMPDC courses were created as a result of the NCM Corps 2020, which is the strategic guidance for the professional development of the Canadian Forces Non-Commissioned Members. [1]

The NCMPDC is a unique professional education establishment within the CF. It is the only pan-CF school that is for NCM's taught by NCM's and as of September 2007 commanded by an NCM.

Since May 2009, NCMPDC is under the command of the Canadian Forces College (CFC) in Toronto, which offers a similar professional development curricumlum but for officer from the ranks of major to brigadier-general.

In addition to a university education, Officer Cadets receive military training, occupation training and second language training and a career after graduation. The full-time salary includes full dental care, as well as vacation with full pay. Upon successful completion of the Regular Officer Training Plan (ROTP), Officer Cadets are awarded a university degree and granted commissions as Officers in the Canadian Forces. Normally, graduates serve at least five years with the Canadian Forces. The application deadline to ROTP is in January for Basic Officer Training in July and admission the following September.

Typically, successful applicants enter the Canadian Military College (CMC) System as an Officer Cadet, where they receive an education that balances academics, leadership, bilingualism and athletics. If there are more qualified candidates than the CMC System can accommodate or the choice of programme is not offered, such as Nursing, Physiotherapy and Pharmacy, successful applicants would be eligible to apply to any Canadian university where books, lab fees and student fees are covered, and students receive a monthly salary.

Since an application to ROTP is also an application to the Canadian Military College System, all candidates are assessed against an aptitude test, a medical examination, and an interview. Military Potential is an assessment of Aptitudes, Personality Traits, and the choice of occupation. Academic Performance is an a candidate's top six most recent marks related to the requirements of the chosen programme. Officer Cadets are obliged to maintain satisfactory academic and military performance throughout the programme.

Squadrons of the Cadet Wing

The undergraduate student body, known as the Cadet Wing, is sub-divided into three smaller groupings called Squadrons, under the guidance and supervision of senior cadets.[11] The squadrons are currently named in honour of local communities. Squadrons are subdivided into flights and sections.

In the 1960s, the three squadrons were named Cartier, Maisonneuve and Champlain in honour of historical figures. 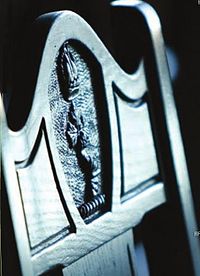 When they arrive at the Officer Cadets Division, the officer-cadets have already chosen their service. They are soon separated into three squadrons (Richelieu, Iberville or Tracy).

The cadets live in the Cartier Building or the Champlain Building and eat in Dextraze Pavilion (completed in 1993). The cadets can leave the campus at any time when they do not have classes, study periods or training.

During the week, the daily routine consists of inspection, running, breakfast, classes, sports, and studies. The officer-cadets attend academic classes and undergo military training. The military training is in the form of drill, cartography, compass use and three major field exercises each year. The cadets take roles as cadet squadron commander, second in command (2IC) and section commanders. Outside classes, bilingualism is promoted by French / English weeks.

On the weekend, with the exception of military training, the students are largely free.

The reopening of RMC Saint-Jean in 2007 greatly differs from the original college which opened in 1952 and from the RMC of Canada located in Kingston. The new RMC Saint-Jean emcompasses the Canadian Forces Management and Development School, one of the oldest CF training establishments in the country. It is also the home to the Non-Commissioned Member Professional Development Centre, which develops the prospective future senior leaders of the Canadian Forces NCM Corps.

Michaëlle Jean, Governor General of Canada, inaugurated the Royal Military College Saint-Jean on May 24, 2008, and she presented the new college coat of arms to the Commandant, Colonel Francois Pion.[2]

The Commandant of Royal Military College Saint-Jean reports to the Commander, Canadian Defence Academy (CDA). RMC Saint-Jean also has its own board of governors. Cadets at RMC Saint-Jean are issued scarlet uniforms. The first-year program at RMC Saint-Jean is freeing up beds at RMC allowing more Regular Officer Training Program (ROTP) cadets to attend RMC rather than civilian universities.[3]

Escadron Richelieu uses Cartier Block and Pavillon Lahaie. Pavillons Vanier, DeLéry, Dextraze, Massey and the Old Mess are shared. The campus provides state-of-the-art technological support: library, well-equipped laboratories, ample supplies of learning materials, and Internet access. RMC Saint-Jean infrastructure is currently used by the Canadian Forces located at ASU Saint-Jean and by a non-profit corporation called Campus du Fort Saint-Jean (Quebec), which arranges for the upkeep of many of the educational facilities and leases them out to educational institutions such as the Université du Québec à Montréal (UQAM) for their local program while also renting out others for short events such as large banquets or conventions. The Register of the Government of Canada Heritage Buildings lists six recognized Federal Heritage Buildings on the Royal Military College Saint-Jean grounds:[15] 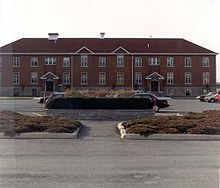 Fort Saint-Jean circa 1775 siege of the fort 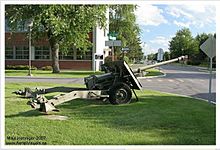 The museum is located in Fort Saint-Jean on the campus of the Collège militaire royal de Saint-Jean. The museum mandate is to collect, conserve, research and display material relating to the history of the CMR, its former cadets and its site, Saint-Jean-sur-Richelieu. The museum contains collections of military memorabilia and military artefacts. The site has been occupied since 1666 by different garrisons, a shipyard and a military college.[23]

The CMR Ex-Cadet Foundation manages the museum which recognizes more than 325 years (1666–1995) of military history at the fortifications located on the Richelieu River. The flora and centennial trees enhance the site.

H18424 Lt Cdr (Ret`d) David Daniel Ruddy founded the CMR Museum in 1965 in order to exhibit artefacts from Fort Saint-Jean and souvenirs from Collège militaire royal de Saint-Jean. He was the CMR Museum Director from 1965 to 1988. The museum was opened in the old guardhouse at the northern entrance to the College from 1974–1998. The three small cells were used to display the historic periods (1666-1951) and the large cell the drunk tank was for the display of memorabilia from CMR, which had opened in 1952. The CMR museum was opened on special occasions until it was recognized as an official museum of the Canadian Forces in May 1973. [24] 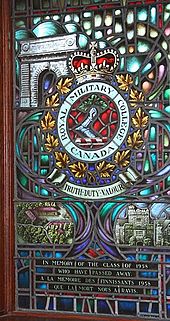 With college numbers and rank held as commandant 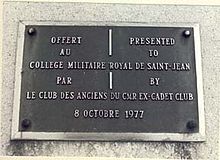 In fiction and popular culture

The College's central place in Canadian military circles has made it the setting for novels, plays, films and other cultural works.