For other uses of this and similar names, see Maisonneuve. 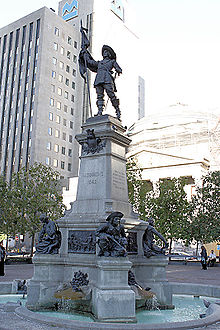 He was born into the aristocracy in Neuville-sur-Vannes in Champagne, France. He joined the military at the age of 13 and had a successful career where he was noted for his ability and his honesty . He was hired by Jérome le Royer de la Dauversiere, a Jesuit who was head of the Société Notre-Dame de Montréal. Based on a vision had by Royer de la Dauversiere, the society was attempting to build a mission on the Montreal Island in New France. Maisonneuve was hired to lead the colonists and ensure their security

There they founded Ville-Marie, building a chapel and a small settlement. A hospital under the command of Jane Mance was also established. Maisonneuve was the first governor of Montreal. They maintained peaceful relations with the Algonquins and the first year of the colony's existence was peaceful. In 1643 a flood threatened the city, Maisonneuve prayed to the Virgin Mary to stop the inundation and when it abated he erected a cross atop Mount Royal, and a cross remains there to this day.

In 1643 the Iroquois discovered the settlement and a long conflict erupted between the French and the Natives that saw the colony severely threatened. Maisonneuve commanded its defence, using his military training. In 1644 he was almost killed when a group of thirty Montrealers were surrounded by over two hundred Iroquois and Maisonneuve barely managed to make it back to the safety of the fort.

In 1645 Maisonneuve received news that his father had died and he returned to France. While there he was offered the position of governor of New France, but turned it down, wanting to continue his leadership of Ville-Marie. Maisonneuve returned to Montreal in 1647 and the wars with the Iroquois continued. In 1649, Maisonneuve stood as godfather for the first white child baptised in the colony. She was Pauline Hébert, infant daughter of fur-trader Augustin Hébert and his wife Adrienne Du Vivier, who had come to Montreal in 1648 with Maisonneuve and their elder daughter Jeanne.

In the spring of 1651 the Iroquois attacks became so frequent and so violent that Ville-Marie thought its end had come. Maisonneuve made all the Montrealers take refuge in the fort. By 1652, the colony at Montreal had been so reduced, he was again forced to return to France to raise 100 volunteers to return to Montreal the following year. If the effort had failed, Montreal was to be abandoned and the survivors re-located downriver to Quebec City. When these 100 arrived in the fall of 1653, the population of Montreal was barely 50 people, including a Jacques Archambault, who dug the first water well of the island in 1658, upon request by Maisonneuve.

Over time the colony grew in size and eventually was large enough to be secure from the Iroquois threat. Control of the colony was taken from the missionary society and taken up by the crown in 1663. Maisonneuve had not enjoyed the favour of the new governor-general Augustin de Saffray de Mésy. In September 1665, Maisonneuve received from Alexandre de Prouville the order to return to France on indefinite leave. After twenty-four years at the head of the colony, he left Montreal for good.

Settling in Paris he lived in relative obscurity. In 1671, Marguerite Bourgeoys received a warm welcome at his home in Paris. He died in 1676; at his bedside were his young friend Philippe de Turmenys, and his devoted servant Louis Fin. On September 10, his funeral took place at the church of the Fathers of the Christian Doctrine, situated not far from the abbey of Saint-Étienne-du-Mont, and there also he was buried.

The Saint-Paul Street was named after Maisonneuve, who built a home for himself on it in 1650.[1]

The Nuns' Island was called Île Saint-Paul in honour of the founder of Montreal; the current name of the island appears starting from the 19th century and was exclusively used from the 1950s on.

The Maisonneuve Monument was erected in 1895 on the Place d'Armes in Old Montreal, to the memory of M. de Maisonneuve. It is the work of Louis-Philippe Hébert (1850–1917). An imaginary model was used to represent Paul de Chomedey, sieur de Maisonneuve, for no authentic portrait of the first governor of Montreal exists.

De Maisonneuve Boulevard in Downtown Montreal is named for him, as is Maisonneuve Park, Collège de Maisonneuve, the neighbourhood of Chomedey in Laval and the Maisonneuve pavilion, a dormitory at the Royal Military College Saint-Jean.