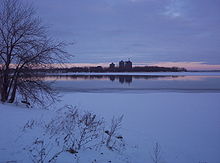 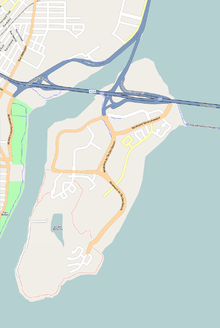 The 3.74 km² island is part of the Hochelaga Archipelago in the St. Lawrence River. It is located immediately southwest of the Island of Montreal, from which it is separated by a narrow channel, and north of the La Prairie Basin.

Although the island is just a few miles from downtown Montreal, it is very secluded from the city and remains free of heavy traffic and noise of the city.  The island is primarily composed of residential apartments, condos and flats. Commercial services are clustered in malls around Place du Commerce near the Champlain Bridge, with civic services including a community centre and church around Place Elgar. A recent development is the construction of the campus headquarters of Bell Canada on the northern tip of the island.

The island is noted for its parks and scenery including West Vancouver Park which overlooks the Saint Lawrence River. The 26-hectare Domaine Saint-Paul natural woodland in the southern part of the island, a crucial nesting area for more than a hundred species of birds, is one of the last remaining natural woodlands in southern Montreal. It has been progressively eroded by development.[2] The woodland surrounds an artificial lake called Lac des Battures.

There is only one school on the island, École Île-des-Sœurs primary school; consultations are under way to construct a second grade school near Parc de la Fontaine.

A substantial part of Nuns' Island is owned by Structures Metropolitaines.

Originally called Île Saint-Paul in honour of the founder of Montreal, Paul Chomedey, sieur de Maisonneuve, the island was initially acquired by 1634 by Jean de Lauzon, future governor of New France. The island was included in the expansive seigneurie of La Citière on the south shore of the St. Lawrence. [3] In 1664 he ceded the island in three equal parts to three prominent citizens of Ville-Marie: Jacques Le Ber, sieur de Saint-Paul et Senneville; Claude Robutel de Saint-André, sieur de La Noue; and Jean de la Vigne, who transferred his portion to Jacques Le Ber's sister Marie in 1668. She in turn sold her share to her brother, leaving the island divided between the seigneuries of Saint-Paul and La Noue.

The nuns of the Congrégation de Notre-Dame acquired the seigneurie de La Noue in 1706. Following the British conquest, the other seigneurie was auctioned; the nuns purchased it too in 1769, becoming the sole owners of the island for the next 250 years.[4] Their ownership would give the island its unofficial name, attested since the early 19th century.[5]

The nuns farmed the island, building houses and agricultural buildings, and later hired women to help with raising livestock. Owing to a dispute between the congregation and the municipality of Verdun over taxes in the late 19th century, the island, which had no fixed link to the Island of Montreal, was made a municipality (L'Île-Saint-Paul) in 1899.

The nuns continued farming until 1956, when they sold the island to the Quebec Home and Mortgage Co. Ltd. In the same year, the provincial government merged it with Verdun in 1956. [3] By that time the name Saint-Paul had fallen out of use, and the name île des Sœurs was officialized. The nuns left for good in 1957.

The development of the island began in earnest with the opening of the Champlain Bridge in 1962. The urbanization was carried out by the Metropolitan Structures company of Chicago, under a master plan by the American company of Johnson, Johnson, and Roy. [3] Notably, it included four buildings by Ludwig Mies van der Rohe: three high rise apartments, the first of which, 201 rue Corot, was occupied in 1969, and an Esso filling station of the same vintage.[6][7] Significant areas to the south of the island were reclaimed from the St. Lawrence.[8] Construction has continued rapidly since then.