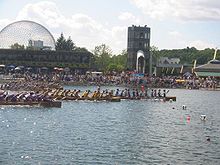 rowing basin in the winter 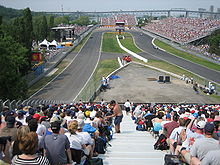 Île Notre-Dame is an artificial island built in 10 months from 15 million tons of rock excavated for the Montreal Metro in 1965. It was created for Expo 67 to celebrate Canada's centennial. The island is part of the city of Montreal and forms part of the Hochelaga Archipelago. It is located in the Saint Lawrence River immediately east of Île Sainte-Hélène and west of the Saint Lawrence Seaway. Together with Île Sainte-Hélène, it makes up Parc Jean-Drapeau, which is one of the biggest parks in Montreal. To the southwest, the island is connected to the embankment separating the Seaway's Canal de la Rive-Sud from the St. Lawrence River and Lachine Rapids.

Nearly all of the remaining Expo 67 pavilions were demolished in 1975 to make way for a long rowing and canoeing basin for Montreal's 1976 Summer Olympics. The Olympic Basin is still the biggest artificial rowing basin in North America. The former pavilion of France and the pavilion of Quebec were gutted, redecorated, and became the Montreal Casino, a large gambling establishment owned and operated by the government of Quebec. The Canada Pavilion now serves the administration of the Société du parc Jean-Drapeau, a para-municipal body of the city of Montréal, manager of Parc Jean-Drapeau.

The park area on the western tip of the island has a small lake with a beach open throughout the summer season for swimming, volleyball and watercraft rentals. During the decades since Expo 67 the city of Montreal has embellished the island with plants and trees, making it look less artificial.

In 1980 the greening and beautification of the island was accelerated when it was the host to the Floralies Internationales, a horticultural exhibition and competition gathering plant masterpieces from dozens of countries. Still accessible today from spring to autumn, these magnificent gardens cover an area of over 25 hectares. The Floralies gardens are preserved and arranged creatively by the Parc Jean-Drapeau team of gardeners. In addition, the micro-climate created in part by the lagoons crisscrossing the island promotes the uniqueness of these gardens by allowing the growth of plants usually intolerant of Montréal's climate.

The park hosted the ICF Canoe Sprint World Championships in 1986.

For a few days every year the island hosts Formula One racing of the Canadian Grand Prix and, later in the summer, by the NASCAR Busch series - NAPA Auto Parts 200 (stock car race). The cars zoom around the Circuit Gilles Villeneuve. The remaining of the year, the Circuit is open to the public and is ideal for cyclists, inline skaters, runners etc.

Parc Jean-Drapeau is officially recognized as a registered leg of the Route verte and Trans Canada trail.

In fall and spring, visitors to the site primarily consist of gamblers at the casino and rowers and canoers in the Olympic basin. During the coldest part of winter, ice skaters use the basin as a rink. City workers clear the snow from its icy surface as part of the annual winter festival, "La Fête des Neiges de Montréal" (note: in the last few years, the ice rink was made on Île Sainte-Hélène, close to the metro station). Cross country skiers and snowshoers can also tour the area.