Japanese gardens (日本庭園, nihon teien?), that is, gardens in traditional Japanese style, can be found at private homes, in neighborhood or city parks, and at historical landmarks such as Buddhist temples, Shinto shrines and old castles.

Landscape gardener Seyemon Kusumoto wrote that the Japanese generate "the best of nature's handiwork in a limited space."[1] Some of the Japanese gardens most famous in the West, and within Japan as well, are dry gardens or rock gardens, karesansui. The tradition of the Tea masters has produced highly refined Japanese gardens of quite another style, evoking rural simplicity. In Japanese culture, garden-making is a high art, intimately related to the linked arts of calligraphy and ink painting. Since the end of the 19th century, Japanese gardens have also been adapted to Western settings.

Japanese gardens were developed under the influences of the distinctive and stylized Chinese gardens.[2] One of the great interest for the historical development of the Japanese garden, bonseki, bonsai and related arts is the c. 1300 Zen monk Kokan Shiren and his rhymeprose essay Rhymeprose on a Miniature Landscape Garden.

The tradition of Japanese gardening was historically passed down from sensei to apprentice. In recent decades this has been supplemented by various trade schools. However, the opening words of Zōen's Illustrations for designing mountain, water and hillside field landscapes (1466) are "If you have not received the oral transmissions, you must not make gardens" and its closing admonition is "You must never show this writing to outsiders. You must keep it secret".[3]

A catalogue of features "typical" of the Japanese garden may be drawn up without inquiring deeply into the aesthetic underlying Japanese practice. Typical Japanese gardens have at their center a home from which the garden is viewed. In addition to residential architecture, depending on the archetype, Japanese gardens often contain several of these elements:

Karesansui gardens (枯山水) or "dry landscape” gardens were influenced mainly by Zen Buddhism and can be found at Zen temples of meditation (Japan Guide). Unlike other traditional gardens, there is no water present in Karesansui gardens. However, there is raked gravel or sand that simulates the feeling of water. The rocks or gravel used are chosen for their artistic shapes, and mosses as well as small shrubs are used to further garnish the Karesansui style (Japanese Lifestyle). All in all, the rocks and moss are used to represent ponds, islands, boats, seas, rivers, and mountains in an abstract way (Japan Guide). - Example: Ryōan-ji, temple in Kyoto, has a garden famous for representing this style. Daisen-in, created in 1513, is also particularly renowned.

Tsukiyama Gardens often copy famous landscapes from China or Japan, and they commonly strive to make a smaller garden appear more spacious (Japan Guide). This is accomplished by utilizing shrubs to block views of surrounding buildings, and the garden's structure usually tries to make onlookers focus on nearby mountains in the distance (Japanese Lifestyle). By doing this, it seems that the garden has the mountains as part of its grounds. Ponds, streams, hills, stones, trees, flowers, bridges, and paths are also used frequently in this style (Japan Guide).

Chaniwa Gardens are built for holding tea ceremonies. There is usually a tea house where the ceremonies occur, and the styles of both the hut and garden are based on the simple concepts of the sado (Japan Guide). Usually, there are stepping stones leading to the tea house, stone lantern, and stone basins (tsukubai) where guests purify themselves before a ceremony(Japan Guide).

Japanese gardens might also fall into one of these styles:

Other gardens also use similar rocks for decoration, some of which come from distant parts of Japan. In addition, bamboos and related plants, evergreens including Japanese black pine, and such deciduous trees as maples grow above a carpet of ferns and mosses.

Use of stones, water, and plantings

Though often thought of as tranquil sanctuaries that allow individuals to escape from the stresses of daily life, Japanese gardens are designed for a variety of purposes. Some gardens invite quiet contemplation, but may have also been intended for recreation, the display of rare plant specimens, or the exhibition of unusual rocks.

Kaiyu-shiki or Strolling Gardens require the observer to walk through the garden to fully appreciate it. A premeditated path takes observers through each unique area of a Japanese garden. Uneven surfaces are placed in specific spaces to prompt people to look down at particular points. When the observer looks up, they will see an eye-catching ornamentation which is intended to enlighten and revive the spirit of the observer. This type of design is known as the Japanese landscape principle of "hide and reveal".

Stones are used to construct the garden's paths, bridges, and walkways. Stones can also represent a geological presence where actual mountains are not viewable or present. They are sometimes placed in odd numbers and a majority of the groupings reflect triangular shapes, which often are the mountains of China.

A water source in a Japanese garden should appear to be part of the natural surroundings; this is why one will not find fountains in traditional gardens. Man-made streams are built with curves and irregularities to create a serene and natural appearance. Lanterns are often placed beside some of the most prominent water basins (either a pond or a stream) in a garden. In some gardens one will find a dry pond or stream. Dry ponds and streams have as much impact as do the ones filled with water.

Green plants are another element of Japanese gardens. Japanese traditions prefer subtle green tones, but flowering trees and shrubs are also used. Many plants in imitated Japanese gardens of the West are indigenous to Japan, though some sacrifices must be made to account for the differentiating climates. Some plants, such as sugar maple and firebush, give the garden a broader palette of seasonal color.

In the Kamakura and Muromachi periods (1185-1573), a great many gardens were created during these two time periods due to improved garden techniques and the development of Syoinzukuri style (Japanese Lifestyle). Zen beliefs were also flourishing at this time and had great influences over garden techniques and purposes. Another factor that allowed gardens to flourish stems from the fact that the shoguns simply enjoyed gardens. Dry landscape style also emerged during this time (Japanese Lifestyle). A notable gardener who appeared during these periods is Soseki Muso: He made Saihoji Temple (Kyoto), Tenruji Temple (Kyoto), and Zuizenji Temple (Kamakura) gardens. (Japanese Lifestyle) 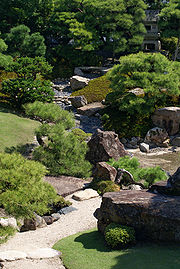 After the Muromachi Period, Japanese tea ceremonies became an intricate part of Japanese culture (Japanese Lifestyle). Sen no Rikyu (1517-1591) created the traditional style of a tea house where there was usually a roji (“dewy path”) leading to the house (Japanese Lifestyle). Besides the tea houses, gardens constructed in the Edo period (1603-1868) reflected the tastes and style of each individual shogun ruler. Instead of being a religious symbol, gardens shifted to being a symbol of a shogun’s prestige and power (Miller). These tea house styled houses and gardens can be seen in Kenrokuen (Kanazawa), Kōraku-en (Okayama), Ritsurin Garden (Takamsatsu), Koishikawa Korakuen (Tokyo), and Suizenji Park (Kumamoto) (Japanese Lifestyle).

In the Meiji period following the modernization of Japan, famous traditional gardens were owned by businessmen and politicians. Some of these extensive gardens are open to public viewing in Murinan (Kyoto) and Chinzanso (Tokyo) (Japanese Lifestyle). Famous gardeners of this period include 7th generation Jihe Ogawa, known as Ueji, and innovative dry landscape garden designer Mirei Shigemori. (Japanese Lifestyle)

Many poems were inspired and written about the different Japanese Gardens. An example of the poems written includes:

After the tea ceremony was refined by Sen Rikyu, the tea garden, house, and utensils all served as a way to “awaken consciousness and to realize with humility our relationship with all that is around us and with the universe itself(Miller).” Also, tea ceremonies were partly designed to teach participants how to gain absolute control over body and mind (Kato p. 27). As a result, "it emphasizes not disconnection but connection between body movement and mind (Kato p. 27)." Culturally, the Japanese followed the five Confucian virtues (loyalty, righteousness, politeness, wisdom, and trust) to ground these tea ceremony ideals off of (Kato p. 27). In short, the tea ceremonies were a cultural activity to teach Japanese/Confucian virtues that were important for life. 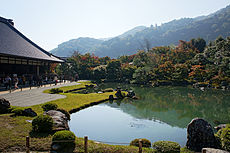 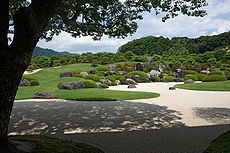 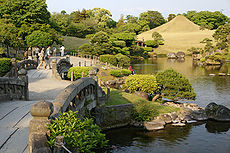 The Minister of Education, Culture, Sports, Science and Technology of the government of Japan designates the most notable of the nation's scenic beauty as Special Places of Scenic Beauty, under the Law for the Protection of Cultural Properties.[5] As of March 1, 2007, 29 sites are listed, more than a half of which are Japanese gardens, as below;

However, the Education Minister is not eligible to have jurisdiction over any imperial property. These two gardens, administered by Imperial Household Agency, are also considered to be great masterpieces.

In the English-speaking world

The aesthetic of Japanese gardens was introduced to the English-speaking community by Josiah Conder's Landscape Gardening in Japan (Kelly & Walsh, 1893). It sparked the first Japanese gardens in the West. A second edition was required in 1912.[8] Conder's principles have sometimes proved hard to follow:

"Robbed of its local garb and mannerisms, the Japanese method reveals aesthetic principles applicable to the gardens of any country, teaching, as it does, how to convert into a poem or picture a composition, which, with all its variety of detail, otherwise lacks unity and intent"[9]

Samuel Newsom's Japanese Garden Construction (1939) offered Japanese aesthetic as a corrective in the construction of rock gardens, which owed their quite separate origins in the West to the mid-19th century desire to grow alpines in an approximation of Alpine scree.

According to the Garden History Society, Japanese landscape gardener Seyemon Kusumoto was involved in the development of around 200 gardens in the UK. In 1937 he exhibited a rock garden at the Chelsea Flower Show, and worked on the Burngreave Estate at Bognor Regis, and also on a Japanese garden at Cottered in Hertfordshire. The lush courtyards at Du Cane Court—an art deco block of flats in Balham, London, built between 1935 and 1938—were designed by Kusumoto. All four courtyards there may have originally contained ponds. Only one survives, and this is stocked with koi. There are also several stone lanterns, which are meant to symbolise the illumination of one's path through life; similarly, the paths through the gardens are not straight. Japanese maple, Japanese anemone, cherry trees, evergreens, and bamboo are other typical features of Du Cane Court's gardens.[1] 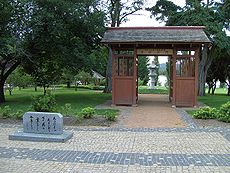 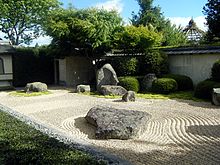 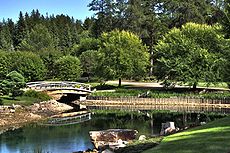 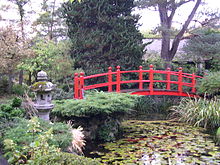 Japanese Garden, Tully, County Kildare. Red lacquered arched bridges are Chinese in origin and seldom seen in Japan, but are often placed in Japanese-style gardens in other countries.[13] 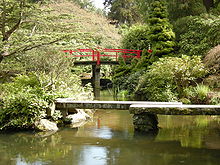 Kubota Garden in Seattle features these contrasting bridge types -- both illustrative of a Japanese garden themes. 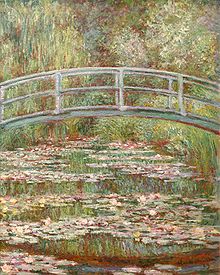 Claude Monet, Bridge over a Pond of Water Lilies, 1899, Metropolitan Museum of Art 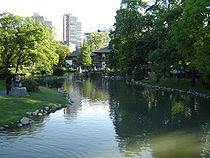