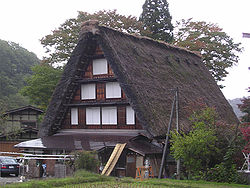 Minka (民家, literally "house of the people"?) are private residences constructed in any one of several traditional Japanese building styles. In the context of the four divisions of society, minka were the dwellings of farmers, artisans, and merchants (i.e., the three non-samurai castes), but this connotation no longer exists in the modern Japanese language, and any traditional Japanese style residence of an appropriate age could be referred to as minka. 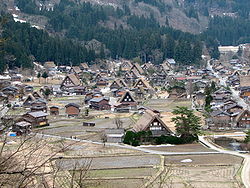 Minka come in wide range of styles and sizes, largely as a result of differing geographic and climatic conditions as well as the lifestyle of the inhabitants, but most generally fall into one of two major classifications: farm houses nōka (農家?) and town houses machiya (町屋?). There is also a subclass of the farm house style found in fishing villages, which is called gyoka (漁家?).

Minka are generally treated as historic landmarks, and many have been designated for preservation by local municipalities or the national government. Of particular note is the so called gasshō-zukuri (合掌造り, literally "clasped-hands" style?), which is preserved in two villages in central Japan, Shirakawa in Gifu Prefecture and Gokayama in Toyama Prefecture, that together have been designated a World Heritage Site by UNESCO.

The tremendous regional variation of minka has also been preserved in parks such as Nihon Minka-en in Kawasaki, where examples from around Japan are kept on display. 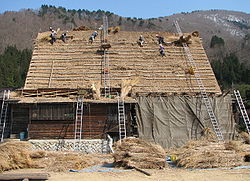 The central concept in the design and construction of minka is the use of cheap and readily available materials. Farmers could not afford to import anything expensive or difficult to come by into their small villages. Thus, nōka are generally made almost exclusively from wood, bamboo, clay and various kinds of grasses and straw. The base skeletal structure of the home, roof, walls, and support columns are made from wood. External walls were often completed with the addition of bamboo and clay; internal walls were not fixed, and consisted of sliding wood lattice doors, or wood-and-paper screens called fusuma.

Grass and straw are used for the roofing thatch, and for mushiro and tatami mats placed on the floor. Sometimes baked-clay roofing tiles were used in addition to thatch. Stone was sometimes used to strengthen or establish foundations but is not employed for the home itself.

As in other forms of traditional Japanese architecture, wooden columns support all the weight of the structure, so the walls are not load-bearing and can afford to have spaces left in them for windows or entryways. These openings would be covered with shoji paper screens, and also with heavier wooden doors. The wooden columns and crossbeams, intricately interlocked without the use of nails, formed the skeletal structure. 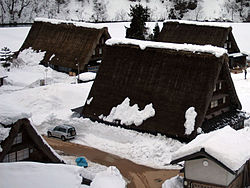 Gasshō-zukuri are perhaps most recognizable and distinguished for their high, peaked roofs. This serves somewhat as a substitute for a chimney, as mentioned above, and might also have allowed for extensive storage space. But the primary purpose of shaping minka roofs in this manner was to accommodate for the extensive precipitation experienced in many parts of Japan. A steeply peaked roof allows rain and snow to fall straight off it, preventing water from getting through the roof into the home, and to a lesser extent preventing the thatch itself from getting too wet and beginning to rot.

There are three basic styles of roofs, which bear strong similarities to roofs seen in other styles of Japanese architecture. Most machiya have gabled kirizuma (切妻?) roofs, covered in shingles or tiles, and slanting down on either side of the house. Often, stones would be placed atop the shingles to prevent them from being blown away. By contrast, the majority of nōka have either thatched yosemune (寄せ棟?) style hipped roofs, which slant down on four sides, or the more elaborate irimoya (入母屋?) roof with multiple gables and a combination of thatched sections and shingled sections.

At the roof's peak and other places where roof sections came together, special roof caps would be needed. On tiled or shingled roofs, these treatments would consist simply of more shingles or tiles. These covers, particularly at the corners of the roof, would often serve as the only decoration on these simple homes; gargoyles or other figures carved in clay or other materials would often be placed here at the ends of the roof caps. 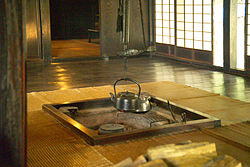 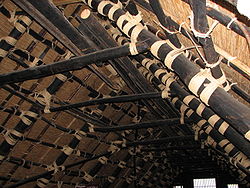 The interior of a minka was generally divided into two sections: a floor of compacted earth, called doma (土間?), and a raised floor (generally around 20 inches (50 cm) above the level of the doma) covered in tatami or mushiro mats.

The doma was used for most cooking and farming-related tasks, and usually included a clay furnace-like oven called a kamado (竈?), a wooden sink, food barrels, and a large jug to store water from an outside well. A large wooden door called an ōdo would serve as the front entrance to the building.

The raised floor often included a built-in hearth, called an irori (囲炉裏?). However, there was no chimney connecting directly from the hearth to the outside, only a small smoke vent in the roof would sometimes be present. Smoke would rise up into the area of the high and spacious roof; thus, the inhabitants of the home did not breathe in the smoke and soot, but it did blacken the thatch, which would have to be replaced fairly often.

Though there were many various possible arrangements of the rooms within a home, one of the most common, called yomadori (四間取り?), comprised four rooms in the raised floor portion of the house, adjacent to the doma. Although these four rooms could be partitioned, they were more or less communal space, since inhabitants had to pass through one room to get to another. Two of these rooms would be used for communal family activities, including the one with the irori hearth. Sometimes a small oil lamp would be used for light, but due to the cost of oil, more often the hearth would be the only artificial light in the home.

The family would gather around this hearth at mealtime, and sit in a prearranged order determined by social status within the family. The side furthest from the doma was called the yokoza and was where the head of the household would sit. Another side was for the housewife and other female family members, the third for male family members and guests, and the fourth side of the hearth was occupied by a pile of firewood.

The other rooms served as bedrooms and as space for entertaining guests, and would include a tokonoma, an alcove still commonly found in modern Japanese homes, where flowers, scrolls, or other such things would be displayed. The bath and toilet were often built as separate structures, or as additions outside the main structure of the house but under the eaves of the roof.

Machiya were by necessity arranged somewhat differently from their rural cousins. The main structure, or omoya (母屋?), stood in front of an attached storehouse (kura (倉?) or a separated one called a zashiki (座敷?). The doma generally extended from the front of the house back to the storehouse, and would have three or four adjacent rooms. The room closest to the street was used as a shop or to conduct business, and was called mise (店?). The middle room was used as an office and to entertain guests. Meanwhile, the room closest to the rear of the home would look out upon the backyard garden, and would contain a tokonoma and be used for most of the family's daily activities.

Unlike nōka, machiya often had a second story, where the family would sleep. The second floor was also used to store items used on a more regular basis than those possessions kept in the storehouse in the back.