Weimar (German pronunciation: [ˈvaɪma]) is a city in Germany famous for its cultural heritage. It is located in the federal state of Thuringia (German: Thüringen), north of the Thüringer Wald, east of Erfurt, and southwest of Halle and Leipzig. Its current population is approximately 65,000. The oldest record of the city dates from the year 899. Weimar was the capital of the Duchy (after 1815 the Grand Duchy) of Saxe-Weimar (German Sachsen-Weimar).

Weimar's cultural heritage is vast. It is most often recognised as the place where Germany's first democratic constitution was signed after the First World War, giving its name to the Weimar Republic period in German politics, of 1918–1933. However, the city was also the focal point of the German Enlightenment and home of the leading characters of the literary genre of Weimar Classicism, the writers Goethe and Schiller. The city was also the birthplace of the Bauhaus movement, founded in 1919 by Walter Gropius, with artists Wassily Kandinsky, Paul Klee, Oskar Schlemmer, and Lyonel Feininger teaching in Weimar's Bauhaus School. Many places in the city centre have been designated as UNESCO World Heritage sites.

It is one of the smallest states in Germany. The city of Weimar is classified as an independent city district, in addition to the 17 districts (Landkreise) and 5 other independent cities of Thuringia. Weimar is the 4th largest area in Thuringia, with a population of approximately 65,000 people.

The city limits of Weimar itself are approximately 7 km and the neighbouring cities are Jena and Erfurt, the capital of Thuringia. The city lies along the River Ilm. In the valley of the river Ilm river the federal Motorway 87 runs from Ilmenau to Leipzig and two railways: the Ilmbahn between Kranichfeld and Weimar and the highspeed railway from Berlin to Frankfurt am Main between Weimar and Großheringen.

The city is north-east of the Thuringian Forest, 25 minutes away by autobahn or train. 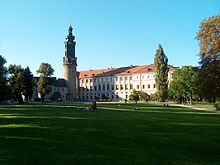 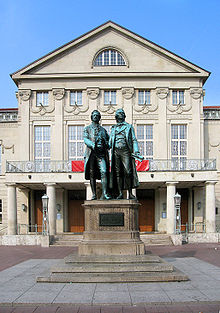 The Goethe-Schiller Monument in front of the Deutsches Nationaltheater and Staatskapelle Weimar.

The oldest records about Weimar date back to the year 899. Its name changed over the centuries from Wimares through Wimari to Wimar and finally Weimar; it is probably derived from Old High German wih 'holy' + mari 'standing water, swamp'.[2] (Another theory derives the first element from OHG win 'meadow, pasture.'[3]) In 1410 it received city rights, although the growth of the city was severely affected by the 1424 fires.

In 1552 Weimar became the capital of the Duchy of Saxe-Weimar (German Sachsen-Weimar) and remained so until 1918.

During the regencies of Anna Amalia (1758–1775) and her son Carl August (1809–1828), Weimar became an important cultural centre of Europe, having been home to such luminaries as Goethe, Schiller, and Herder; and in music the piano virtuoso Hummel (a pupil of Mozart), Liszt, and Bach. Richard Strauss worked in Weimar for 5 years as second conductor in the acclaimed Staatskapelle Weimar (the court orchestra founded in 1491). Several of his encores for works such as Hansel and Gretel, Don Juan and Macbeth were performed by the Staatskapelle Weimar. It has been a site of pilgrimage for the German intelligentsia since Goethe first moved to Weimar in the late 18th century. Goethe was also active in civic duties while living in Weimar. He served as Privy Councilor to the Grand Duke of Saxe-Weimar-Eisenach for an extended period. The tombs of Goethe and Schiller, as well as their archives, may be found in the city. Goethe's Elective Affinities (1809) is set around the city of Weimar.

For more details on this topic, see Weimar Republic.

The period in German history from 1919 to 1933 is commonly referred to as the Weimar Republic, as the Republic's constitution was drafted here because the capital, Berlin, with its street rioting after the 1918 German Revolution, was considered too dangerous for the National Assembly to use it as a meeting place.

Walter Gropius founded the Bauhaus School and movement in Weimar in 1919. The School aimed to teach and develop modernist style. The Bauhaus University and the Liszt School of Music Weimar, attracted many students, specializing in art, media and design, architecture, civil engineering and music. The Bauhaus in Weimar lasted from 1919 to 1925, when it moved to Dessau, after the newly-elected right-wing city council put pressure on the School by withdrawing funding and forcing its teachers to quit. 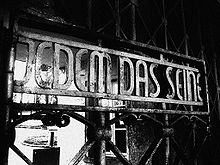 Buchenwald's main gate, with the slogan Jedem das Seine (literally, "to each his own", but figuratively "everyone gets what they deserve")

In 1937, the Nazis constructed the Buchenwald concentration camp, only eight kilometres from Weimar's city centre. The slogan Jedem das Seine (literally "to each his own", but figuratively "everyone gets what he deserves") was placed over the camp's main entrance gate. Between July 1938 and April 1945, some 240,000 people were incarcerated in the camp by the Nazi regime, including 168 Western Allied POWs.[4] The number of deaths at Buchenwald is estimated at 56,545.[5] The Buchenwald concentration camp provided slave labour for local industry (arms industry of Wilhelm-Gustloff-Werk).[6]

The Allied ground advance into Germany reached Weimar in April 1945, and the city surrendered to the US 80th Infantry Division on April 12, 1945. [7] The residents of Weimar were ordered to walk through Buchenwald, to see what had been happening so close to the city, as documented in Billy Wilder's film Death Mills. The city ended up in the Soviet zone of occupation, however, so US troops were soon replaced with Russian forces. From 1945 to 1950, the Soviet Union used the occupied Buchenwald concentration camp to imprison defeated Nazis and other Germans. The camp slogan remained Jedem das Seine. On 6 January 1950, the Soviets handed over Buchenwald to the East German Ministry of Internal Affairs.

Weimar was part of the German Democratic Republic (DDR, East Germany) from 1949 to 1990.

The European Council of Ministers selected the city as European Capital of Culture for 1999.

On 2 September 2004, a fire broke out at the Duchess Anna Amalia Library. The library contains a 13,000-volume collection including Goethe's masterpiece Faust, in addition to a music collection of the Duchess. An authentic Lutheran Bible from 1534 was saved from the fire. The damage stretched into the millions of dollars. The number of books in this historic library exceeded 1,000,000, of which 40,000 to 50,000 were destroyed past recovery. The library, which dates back to 1691, belongs to UNESCO world heritage, and is one of the oldest libraries in Europe. The fire, with its destruction of much historical literature, amounts to a huge cultural loss for Germany, Europe, and indeed the world. A number of books were shock-frozen in the city of Leipzig to save them from rotting. On 24 October 2007 the library reopened. Visitors were advised to book their tickets many months in advance.

Weimar and the state Thuringia are celebrating Liszt's 200th birthday in 2011.

The Onion Market (Weimarer Zwiebelmarkt) is an annual festival held in October in Weimar and it is Thuringia's largest festival. The festival is held over 3 days and approximately 500 stalls and more than 100 stage performances are put up across the city. 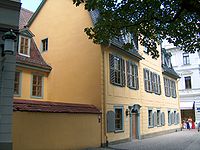 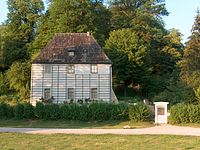 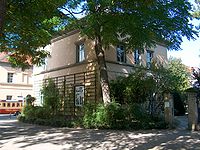 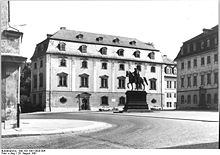 There are several clubs with live music once or twice a week. The two student clubs in the city centre also feature disco and live music events on Friday- and Saturday nights (Studentenclub Schützengasse, Kasseturm). There are several smaller theatre and cabaret venues other than the large "DNT" (Deutsches National Theater). There are four cinemas including a 3-D cinema. 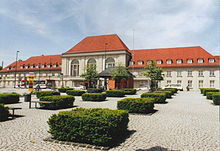 For a small city, Weimar is well served by city bus routes, which also serve all of the annex towns and villages. An hourly bus route serves the Buchenwald Memorial. There are also many places to rent bikes in the city centre. Weimar is part of the Goethe cycle tour route and the Ilm Valley cycle tour.

Weimar is connected by one motorway, the Autobahn A4 (A4) and two routes: B7 and B85

Weimar station is on the ICE express train line (ICE) from Frankfurt, to Dresden and Berlin, with trains stopping every hour. The ICE service to Leipzig takes 50 minutes and the service to Dresden takes two hours. There are frequent train services to neighboroung cities Erfurt (westbound) and Jena (eastbound), taking approximately 15 minutes to either city. Though, recently many ICEs don't stop in Weimar any more.

The nearest airports are Erfurt and Leipzig-Halle.

Weimar is twinned with: