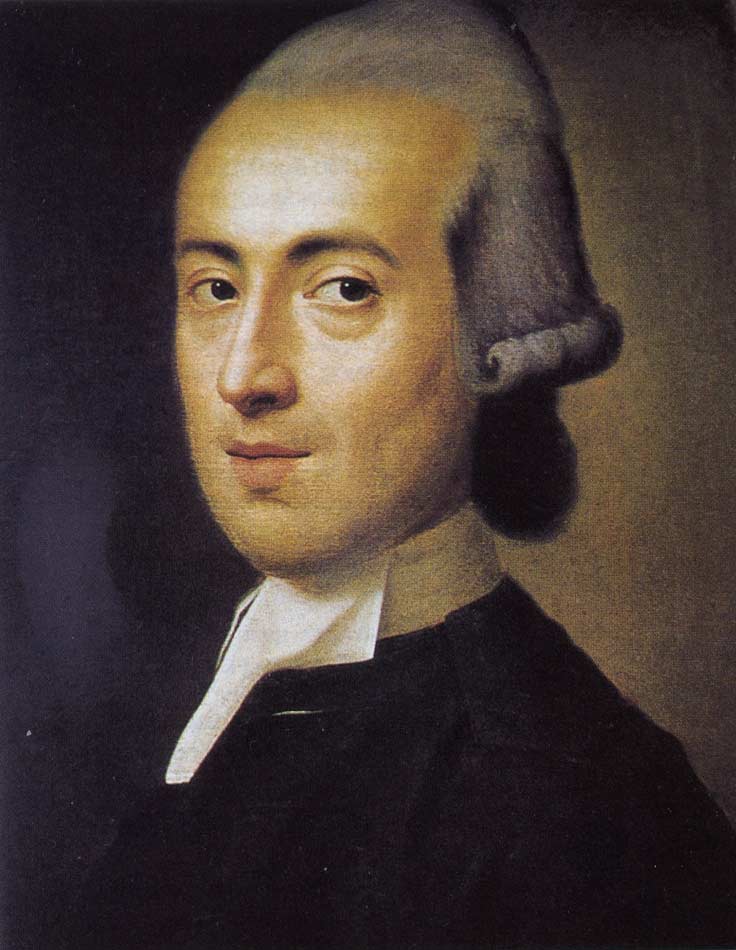 Johann Gottfried von Herder (, ndash , ) was a German philosopher, , and . He is associated with the periods of Enlightenment, , and .

Born in Mohrungen (Morąg) in the , Herder grew up in a poor household, educating himself from his father's Bible and songbook. In 1762, an introspective youth of seventeen, he enrolled at the local , where he became a student of . At the same time, Herder became an intellectual protégé of , a patriotic Francophobe and intensely subjective thinker who championed the emotions against reason. His choice of Hamann over such luminaries as was significant, as this odd figure, a needy , delved back into the German of and others, pronouncing obscure and oracular dicta that brought him fame as the " of the North". Hamann's disjointed effusions generally carried subtitles such as "Hierophantic Letters" or "A Rhapsody in Cabbalistic Prose".

Hamann's influence led Herder to confess to his wife later in life that "I have too little reason and too much idiosyncrasy", yet Herder can justly claim to have founded a new school of German political thought. Although himself an unsociable person, Herder influenced his contemporaries greatly. One friend wrote to him in 1785, hailing his works as "inspired by God." A varied field of theorists were later to find inspiration in Herder's tantalisingly incomplete ideas.

In 1764, now a clergyman, Herder went to to teach. It was during this period that he produced his first major works, which were .

In 1769 Herder traveled to the French port of and continued on to Paris. This resulted in both an account of his travels as well as a shift of his own self-conception as an author.

By 1770 Herder went to , where he met the young Goethe. This event proved to be a key juncture in the history of , as Goethe was inspired by Herder's to develop his own style. This can be seen as the beginning of the "" movement. In 1771 Herder took a position as head pastor and court preacher at under Count .

By the mid-1770s, Goethe was a well-known author, and used his influence at the court of to secure Herder a position as General Superintendent. Herder moved there in 1776, where his outlook shifted again towards .

Towards the end of his career, Herder endorsed the , which earned him the enmity of many of his colleagues. At the same time, he and Goethe experienced a personal split. Herder died in in 1803.

In 1772 Herder published "Treatise on the Origin of Language" and went further in this promotion of language than his earlier injunction to "spew out the ugly slime of the . Speak German, O You German". Herder now had established the foundations of comparative within the new currents of political outlook.

Throughout this period, he continued to elaborate his own unique theory of in works such as the above, while Goethe produced works like ndash the movement was born.

Herder wrote an important essay on and "Auszug aus einem Briefwechsel über Ossian und die Lieder alter Völker" (Extract from a correspondence about and the Songs of Ancient Peoples) published in 1773 in a manifesto along with contributions by Goethe and . Herder wrote that "A poet is the creator of the nation around him, he gives them a world to see and has their souls in his hand to lead them to that world." To him such poetry had its greatest purity and power in nations before they became civilised, as shown in the , the , and , and he tried to find such virtues in ancient German folk songs and Norse poetry and .

After becoming General Superintendent in 1776, Herder's philosophy shifted again towards . Herder was at his best during this period, and produced works such as his unfinished "Outline of a Philosophical History of Humanity" which largely originated the school of historical thought. Herder's philosophy was of a deeply subjective turn, stressing influence by physical and historical circumstance upon human development, stressing that "one must go into the age, into the region, into the whole history, and feel one's way into everything". The historian should be the "regenerated contemporary" of the past, and a as "instrument of the most genuine patriotic spirit".

Along with and others, Herder replaced the traditional concept of a juridico-political state with that of the "folk-nation" as organic in its historical growth, thus creating the school. Every nation was in this manner organic and whole, nationality a plant of nurture. He talked of the "national animal" and of the " of the whole national group" , which organism was topped by the "national spirit", the "soul of the people" ("").

Herder gave Germans new pride in their origins, modifying that dominance of regard allotted to ("") extolled among others by and . He remarked that he would have wished to be born in the and mused whether "the times of the n emperors" did not "deserve to be set forth in their true light in accordance with the German mode of thought?". Herder equated the German with the Gothic and favoured Dürer and everything Gothic. As with the sphere of art, equally he proclaimed a national message within the sphere of . He topped the line of German authors emanating from Martin Opitz, who had written his "Aristarchus, sive de contemptu linguae Teutonicae" in in 1617. This urged Germans to glory in their hitherto despised language, and Herder's extensive collections of folk-poetry began a great craze in Germany for that neglected topic.

Along with , Herder was one of the first to argue that language determines thought, a theme that two centuries later would be central to the . Herder's focus upon language and cultural traditions as the ties that create a "" extended to include , dance, music and art, and inspired in their collection of German folk tales.

Herder attached exceptional importance to the concept of nationality and of ndash "he that has lost his patriotic spirit has lost himself and the whole worlds about himself", whilst teaching that "in a certain sense every human perfection is national". Herder carried folk theory to an extreme by maintaining that "there is only one class in the state, the "", (not the rabble), and the king belongs to this class as well as the peasant". Explanation that the "Volk" was not the rabble was a novel conception in this era, and with Herder can be seen the emergence of "the people" as the basis for the emergence of a classless but hierarchical national body.

The nation, however was individual and separate, distinguished, to Herder, by climate, education, foreign intercourse, tradition and heredity. Providence he praised for having "wonderfully separated nationalities not only by woods and mountains, seas and deserts, rivers and climates, but more particularly by languages, inclinations and characters". Herder praised the tribal outlook writing that "the who loves himself, his wife and child with quiet joy and glows with limited activity of his tribe as for his own life is in my opinion a more real being than that cultivated shadow who is enraptured with the shadow of the whole species", isolated since "each nationality contains its centre of happiness within itself, as a bullet the centre of gravity". With no need for comparison since "every nation bears in itself the standard of its perfection, totally independent of all comparison with that of others" for "do not nationalities differ in everything, in poetry, in appearance, in tastes, in usages, customs and languages? Must not religion which partakes of these also differ among the nationalities?"

He also predicted that Slavic nations would one day be the real power in Europe, as the western Europeans would reject Christianity, and thus rot away, and saying that the eastern European nations would stick to their religion and their idealism; and would this way become the power in Europe. One of his related predictions was that the Hungarian nation would disappear and become assimilated by surrounding Slavic peoples; this prophecy caused considerable uproar in Hungary and is widely cited to this day. [ [http://www.hungarian-history.hu/lib/trans/trans08.htm Transylvania - Title ] ]

Germany and The Enlightenment

This question was further developed by Herder's lament that did not establish a national church, and his doubt whether Germany did not buy Christianity at too high a price, that of true nationality. Herder's patriotism bordered at times upon national , demanding of territorial unity as "He is deserving of glory and gratitude who seeks to promote the unity of the territories of Germany through writings, manufacture, and institutions" and sounding an even deeper call:

:"But now! Again I cry, my German brethren! But now! The remains of all genuine folk-thought is rolling into the abyss of oblivion with a last and accelerated impetus. For the last century we have been ashamed of everything that concerns the fatherland."Herder presented formal defiance of the age of reason and Enlightenment. In his "Ideas upon Philosophy and the History of Mankind" he even wrote "Compare England with Germany: the English are Germans, and even in the latest times the Germans have led the way for the English in the greatest things."

Herder, who hated absolutism and Prussian nationalism, but who was imbued with the spirit of the whole German "Volk", yet as historical theorist turned away from the light of the eighteenth century. Seeking to reconcile his thought with this earlier age, Herder sought to harmonize his conception of sentiment with reason, whereby all knowledge is implicit in the soul; the most elementary stage is sensuous and intuitive perception which by development can become self-conscious and rational. To Herder, this development is the harmonizing of primitive and derivative truth, of experience and intelligence, feeling and reason.

Herder is the first in a long line of Germans preoccupied with this harmony. This search is itself the key to much in German theory. And Herder was too penetrating a thinker not to understand and fear the extremes to which his folk-theory could tend, and so issued specific warnings. While regarding the s as aliens in Europe, he refused to adhere to a rigid racial theory, writing that "notwithstanding the varieties of the human form, there is but one and the same species of man throughout the whole earth".

He also announced that "national glory is a deceiving seducer. When it reaches a certain height, it clasps the head with an iron band. The enclosed sees nothing in the mist but his own picture; he is susceptible to no foreign impressions." And:

"It is the apparent plan of nature that as one human being, so also one generation, and also one nationality learn, learn incessantly, from and with the others, until all have comprehended the difficult lesson: No nationality has been solely designated by God as the chosen people of the earth; above all we must seek the truth and cultivate the garden of the common good. Hence no nationality of Europe may separate itself sharply, and foolishly say, "With us alone, with us dwells "all" wisdom."

The passage of time was to demonstrate that while many Germans were to find influence in Herder's convictions and influence, fewer were to note his qualificatory stipulations.

Herder had emphasised that his conception of the nation encouraged and the free self-expression of a people's identity. He proclaimed support for the , a position which did not endear him to royalty. He also differed with Kant's philosophy and turned away from the movement to go back to the poems of Shakespeare and .

To promote his concept of the "Volk", he published letters and collected folk songs. These latter were published in 1773 as "Voices of the People in Their Songs" ("Stimmen der Völker in ihren Liedern"). The poets and later used "Stimmen der Võlker" as samples for "The Boy's Magic Horn" ("").