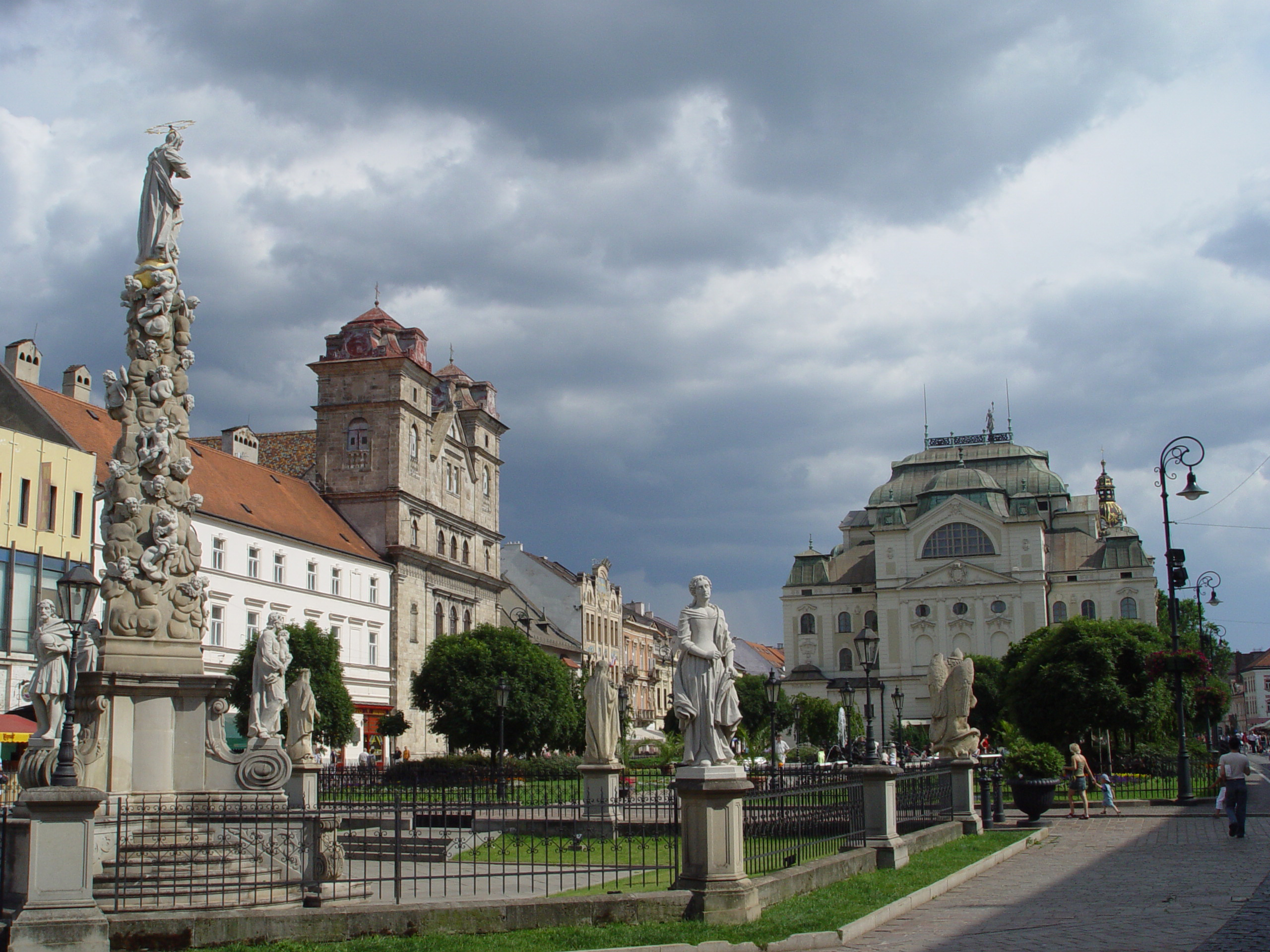 Košice (Audio|Kosice.ogg|Slovak pronunciation: IPA| [ˈkɔʃɪʦɛ] ; Hungarian: Kassa; (also known by other alternative names) is a city in eastern . It is situated on the River at the eastern reaches of the , near the borders with . With a population of nearly 235,000 Košice is the second largest city after . Being the economic and cultural centre of eastern Slovakia, Košice is the seat of the and , the Slovak Constitutional Court, three , various s, and other institutions. The city has a well-preserved historical centre, with Slovakia's biggest Gothic cathedral. The city is well known as the first settlement in Europe to be granted its own coat-of-arms.

The first written mention of the city was in 1230 as "villa Cassa".

The first evidence of inhabitance can be traced back to the end of the era. However, the first written reference to Košice (its southern suburb) comes only from 1230 as "Villa Cassa". After the invasion of Mongols in 1241, King invited German colonists to fill the gaps in population. The city was made of two independent settlements: Lower Košice and Upper Košice, amalgamated in the 13th century. The first known town privileges come from 1290. The city grew quickly because of its strategic location on an international trade route to . The privileges given by the king were helpful in developing crafts, business, increasing importance and for the development of this city. The oldest regulations were registered in 1307. [cite web | publisher = City of Košice | url = http://www.kosice.sk/clanok.asp?file=history_z_hist_14_stor.htm | title = Z histórie Košíc - 14. storočie | date = 2005 | accessdate = 10 February | accessyear = 2008 | language = Slovak] In 1321 Košice became a after it reinforced the king's troops in the crucial moment of the bloody against the Amadé family. In 1347, Košice became the second placed city in the hierarchy of the Hungarian free royal towns, after the . As the first city in Europe, Košice received its own coat of arms in 1369 from .

The history of Košice in the subsequent centuries was influenced by the dynastic disputes over the Hungarian throne. failed to capture the city in 1441. 's mercenaries from defeated Tamás Székely's Hungarian army in 1449. Albert, Prince of Poland could not capture the city during a six months long siege in 1491. In 1526 the city homaged for . captured the city in 1536 but Ferdinand I reconquered the city in 1551. [cite web | publisher = City of Košice | url = http://mek.oszk.hu/00000/00060/html/055/pc005582.html| title = Pallas nagy lexikon | accessyear = 2008 | language = Hungarian] In 1604 occupied Košice during his insurrection against the . , commander of the Habsburg forces, failed to capture the city, but Ferdinand I eventually conquered it in 1606. Stephen Bocskay died in Košice on , and was also interred there. On captured Košice in another anti-Habsubrg insurrection. Košice also became the place of his wedding with . [cite web | publisher = City of Košice | url = http://utazastender.hu/varoslatogatas_kassa| title = Tenderlap| accessyear = 2008 | language = Hungarian] On the Diet in Košice elected the prince of Hungary. In 1657 a printing house and a college were founded by the Jesuits there. The city was besieged by armies several times in the 1670s and it revolted against the Habsburg emperor. The rebel leaders were massacred by emperor's soldiers on . A modern pentagonal fortress was built by the Habsburgs south of the city in 1670. Another rebel leader, captured it in 1682 but the field marshal got it back on . The fortress was demolished by 1713.

In the 17th century it was the "de facto" capital of (in 1563&ndash;1686 as the seat of the "Captaincy of Upper Hungary", and in 1567&ndash;1848 as the seat of the Chamber of (), which was a subsidiary of the supreme financial agency in responsible for Upper Hungary). The city was residence of 's bishop from 1596 to 1700. [cite web | publisher = City of Košice | url =http://leveltar.katolikus.hu/index.htm?http&&&leveltar.katolikus.hu/eger.htm
title = A történeti Magyarország katolikus levéltárai / Eger| accessyear = 2008 | language = Hungarian] Since 1657 it was also seat of the historic Košice University, which was promoted to a Royal Academy in 1777. It was transformed into a Law Academy in the 19th century and ceased to exist in the turbulent year of 1921. After the end of the anti-Habsburg uprisings in the early 18th century, the victorious Austrian armies drove the Ottoman forces back to the south and this major territorial change also created new trade routes, now circumventing Košice. The city came into decay and turned from a rich medieval town into a provincial town, dependent mainly on agriculture. [cite web | publisher = City of Košice | url = http://www.kosice.sk/clanok.asp?file=history_z_hist_18_stor.htm | title = Z histórie Košíc - 18. storočie | date = no date | accessdate = 23 January | accessyear = 2007 | language = Slovak] In 1723, there was erected the Immaculata statue at the place of a former at Hlavná ulica ("Main Street") commemorating the plague from the years 1710&ndash;1711. [cite web | published = City of Košice | url = http://www.kosice.sk/clanok.asp?file=history_remembrances_immacul.htm | title = Immaculata | date = 2005 | accessdate = 10 February | accessyear = 2008] There was a centre of the regenerate movement which published the first Hungarian language periodical called Magyar Museum in Hungary in 1788. [cite web | publisher = City of Košice | url = http://64.233.183.104/search?q=cache:ZEaqH-4h4TMJ:k2.jozsef.kando.hu/~guczi/MAGYAR/SANGER/kazinczy.doc+kassa+nyelv%C3%BAj%C3%ADt%C3%B3&hl=hu&ct=clnk&cd=2&gl=| title = Kazinczy Ferenc| accessyear = 2008 | language = Hungarian] The city's walls were demolished step by step from the late 18th century to 1856; only the remained with few parts of the wall. The city became a seat of its own bishopric in 1802. The city's surroundings became a theatre of war again during the , when the Imperial cavalry general Franz Schlik defeated the Hungarian army on , and on , . The city was captured by the Hungarian army on , , but the Russian troops drove them back on , . [cite web | publisher = City of Košice | url =http://mek.oszk.hu/01300/01344/html/foglalat.htm
title = MEK (Magyar Elektronikus Könyvtár)| accessyear = 2008 | language = Hungarian] At the beginning of the 19th century there were three manufactures and 460 workshops in 1828. The first factories were established in the 1840s (sugar and nail factories). The first telegram message arrived in 1856 and the railway connected the city to , Hungary in 1860. In 1873 there were already connections to , and Chop (in today's ). The city gained a public transit system in 1891 when track was laid down for a horse-drawn tramway. The traction was electrified in 1914. In 1906, 's house of Rodosto was reproduced in Košice and his remains were buried in the . [cite web | publisher = various | url = http://www.rakoci.webex.sk/eng/rakoci.php| title = Rákóczi in Košice 1906–2006 - Who was Ferenc II Rákóczi? | date = | accessdate = 3 March | accessyear = 2008]

After and during the gradual break-up of , the city at first became a part of the transient "Eastern Slovak Republic", declared on 11 December 1918 in Košice and earlier in Prešov under protection of Hungary. On 29 December 1918 the entered the city, making it part of the newly established . However, in June 1919 Košice was occupied again, as part of the , a proletarian puppet state of Hungary. The Czechoslovak troops secured the city for Czechoslovakia in July 1919,

Košice was awarded to , by the , from 1938 until early 1945. The town was bombarded on 26 June 1941, in what became a welcome pretext for the Hungarian government to declare war on a day later. The German occupation of Hungary led to the deportation of Košice's entire population of 12,000 and an additional 2,000 from surrounding areas via cattle cars to the concentration camps for their eventual murder. The town was captured by Soviets in January 1945 and for a short time it became a temporary capital city of the restored Czechoslovak Republic until the Soviet reached . Among other acts, the was declared on 5 April 1945.

After the Communist Party seized power in in February 1948, the city became part of the . Several present-day cultural institutions were founded and large residential areas around the city were built. and the construction and expansion of the East Slovak Ironworks caused population growth from population of 60,700 in 1950 to 235,000 in 1991 and before break-up of Czechoslovakia, it was the fifth largest city in the country. Following the and creation of the Slovak Republic, Košice became the second largest city in the country, became a seat of a and since 1995 is the seat of the . The city has been selected as a for year 2013, along with in .

Košice is situated on the River in the , at the easternmost reaches of the , more precisely its subdivisions of mountains in the north-west and mountains in the south-west. The basin is surrounded from the east by the mountains.

Košice is the second university town in Slovakia, after Bratislava. is the largest university, with 16,015 students, including 867 doctoral students.

Public transport in Košice is managed by "Dopravný podnik mesta Košice" (literally Public Transport Company of the city of Košice). The municipal mass transit system is the oldest one in present-day Slovakia, with the first horse-car line in operation in 1891 (electrified in 1914).

Košice is also a rail hub of eastern Slovakia. It is connected by rail to , , , and . There is also a broad gauge track from , leading to a steel mill south-west of the city. The D1 motorway also connects the city to and more motorways and motorroads are planned around the city. [ cite web | url = http://www.highways.sk/indexE.html | title = Highways and tunnels in Slovakia | author = Ján Gana | date = 2007 | accessdate = 23 January | accessyear = 2008]