Delta II
This article is about the rocket. For the submarine see Delta class submarine.

Delta II was an American space launch system, originally designed and built by McDonnell Douglas. Delta II is part of the Delta rocket family and was in service from 1989 until November 1, 2011. Delta II vehicles included the Delta 6000, the Delta 7000, and two 7000 variants ("Light" and "Heavy").

All United States expendable launch vehicles were planned to be phased out in favour of the Space Shuttle, but the Challenger disaster of 1986 led to Delta development being restarted.[citation needed] The Delta II was specifically designed to accommodate the GPS Block II series of positioning satellites. As of August 2007, Delta IIs have successfully launched 125 projects, including several NASA missions to Mars:

A spent Delta-K second stage of the Delta II, photographed in orbit.

The Delta II family uses a four-digit system to generate its technical names:[6]

For example, a Delta 7925 has the later first stage, nine GEM boosters, and a PAM third stage. A Delta 7320 is a two-stage vehicle with three boosters.

Three payload fairings are available. The original aluminum fairing, seen above, is 9.5 feet in diameter. A 10-foot fairing is made of composite, and can be distinguished by its tapering front and rear. A lengthened 10-foot fairing is used for the largest payloads.

The Delta II system has been used for 151 launches. On September 18, 2007, Delta II completed its 75th consecutive successful launch.[9] This is a record for modern launch vehicles.[10] At the time of its retirement on 1 November 2011, it was the most reliable launch vehicle in service, behind the retired Tsyklon 2.[11] Eight launches took place in 2007.

However, the Delta II system does not have a perfect success record. One mission, the launch of Koreasat-1 in 1995, was a partial failure in which the satellite payload was able to compensate when the launch system placed the vehicle in an incorrect orbit.[12]

Another failure, this time complete, occurred on January 17, 1997, when a Delta II 7925 carrying the first GPS Block IIR satellite, GPS IIR-1, exploded only 13 seconds after liftoff, raining flaming debris all over Launch Complex 17 at Cape Canaveral Air Force Station. No one was injured, and the launchpad itself was not seriously damaged, though several cars were destroyed and a few buildings were damaged.[13] It was later determined that a "17-foot crack" in the rocket booster had caused the failure.[14]

Furthermore, between May 1997 and November 1998, Delta II vehicles placed 55 Iridium satellites into orbit.[15] 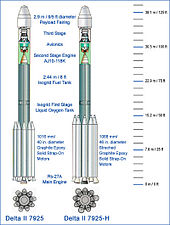 A 2007 article published by the Wall Street Journal speculated about the fate of the Delta II launch system after the U.S. Air Force discontinues its use of the Delta II.[16] Thomas Young, who was director of Goddard Space Flight Center from 1980 to 1982, is quoted as saying, "It's definitely an item people are quite worried about."

As of October 28, 2011, no further Delta II missions are scheduled. ULA has indicated it has "around half a dozen" unsold Delta II rockets on hand.[17] A spokesperson indicated that ULA will change some aspects of the Delta II system once the current Medium Launch Vehicle 3 contract with the Air Force ends and requirements imposed by the contract are lifted. The Air Force contract required that Delta II be kept ready to launch within 40 days of call up, which led ULA to maintain two launch pads at Cape Canaveral. ULA indicated it would not continue to operate two launch pads.[17]

In August 2009, the NASA assistant associate administrator for launch services stated that NASA might purchase additional Delta II launches beyond those it had planned at that time.[18] Five additional Delta II vehicles have been built but remain unassigned to planned flights. Under the terms of the NASA Launch Services II (NLS-II) contract, only three Delta II configurations are available – the 7320-10, 7420-10 and 7920-10 – and launches are only available from SLC-2W at Vandenberg Air Force Base.[19] The NLS-II contract provides for up to five Delta II launches.