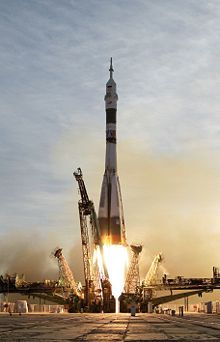 In spaceflight, a launch vehicle or carrier rocket is a rocket used to carry a payload from the Earth's surface into outer space. A launch system includes the launch vehicle, the launch pad and other infrastructure.[1] Usually the payload is an artificial satellite placed into orbit, but some spaceflights are sub-orbital while others enable spacecraft to escape Earth orbit entirely. A launch vehicle which carries its payload on a suborbital trajectory is often called a sounding rocket. 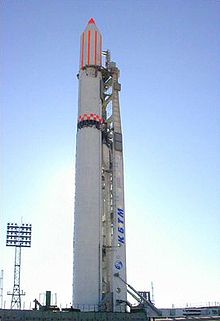 Expendable launch vehicles are designed for one-time use. They usually separate from their payload, and may break up during atmospheric reentry. Reusable launch vehicles, on the other hand, are designed to be recovered intact and used again for subsequent launches. For orbital spaceflights, the Space Shuttle was the only launch vehicle with components which have been used for multiple flights. Non-rocket spacelaunch alternatives are at the planning stage.

Launch vehicles are often characterized by the amount of mass they can lift into orbit. For example, a Proton rocket has a launch capacity of 22,000 kilograms (49,000 lb) into low Earth orbit (LEO). Launch vehicles are also characterized by the number of stages they employ. Rockets with as many as five stages have been successfully launched, and there have been designs for several single-stage-to-orbit vehicles. Additionally, launch vehicles are very often supplied with boosters, which supply high thrust early on in the flight, and normally in parallel with other engines on the vehicle. Boosters allow the remaining engines to be smaller, which reduces the burnout mass of later stages, and thus allows for larger payloads.

Other frequently-reported characteristics of launch vehicles are the nation or space agency responsible for the launch, and the company or consortium that manufactures and launches the vehicle. For example, the European Space Agency is responsible for the Ariane V, and the United Launch Alliance manufactures and launches the Delta IV. Many launch vehicles are considered part of an historical line of vehicles which share the same or similar names such as the Atlas V being the latest member of the Atlas rocket family.

Various methods are used to move an assembled launch vehicle onto its launch pad, each method with its own specialized equipment. These assembly activities take place as part of the overall launch campaign for the vehicle. In some launch systems, like the Delta II, the vehicle is assembled vertically on the pad, using a crane to hoist each stage into place. The Space Shuttle orbiter, including its external tank, and solid rocket boosters, are assembled vertically in NASA's Vehicle Assembly Building, and then a special crawler-transporter moves the entire stack to the launch pad while it is in an upright position. In contrast, the Soyuz rocket is assembled horizontally in a processing hangar, transported horizontally, and then brought upright once at the pad.

In the English language, the phrase carrier rocket was used earlier, and still is occasionally, in Britain. A translation of that phrase is used in German, Russian, and Chinese. In the 1950s, the US Air Force disliked the term carrier due to the competitive nature of their relationship with the US Navy and their high profile operation of aircraft carriers.[citation needed] As an alternative, Project Vanguard provided a contraction of the phrase "Satellite Launching Vehicle" abbreviated to "SLV". This provided a term in the list of what the rockets were allocated for: flight test, or actually launching a satellite. The contraction would also apply to rockets which send probes to other worlds or the interplanetary medium. 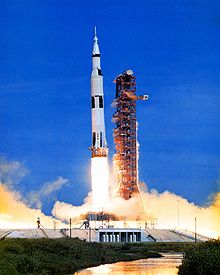 Sounding rockets are normally used for brief, inexpensive space and microgravity experiments. Current human-rated suborbital launch vehicles include SpaceShipOne and the upcoming SpaceShipTwo, among others (see space tourism). The delta-v needed for orbital launch using a rocket vehicle launching from the Earth's surface is at least 9300m/s. This delta-v is determined by a combination of air-drag, which is determined by ballistic coefficient as well as gravity losses, altitude gain and the horizontal speed necessary to give a suitable perigee. The delta-v required for altitude gain varies, but is around 2 kilometres per second (1.2 mi/s) for 200 kilometres (120 mi) altitude.

Minimising air-drag entails having a reasonably high ballistic coefficient, which generally means having a launch vehicle that is at least 20 metres (66 ft) long, or a ratio of length to diameter greater than ten. Leaving the atmosphere as early on in the flight as possible provides an air drag of around 300 metres per second (980 ft/s). The horizontal speed necessary to achieve low earth orbit is around 7,800 metres per second (26,000 ft/s).

The calculation of the total delta-v for launch is complicated, and in nearly all cases numerical integration is used; adding multiple delta-v values provides a pessimistic result, since the rocket can thrust while at an angle in order to reach orbit, thereby saving fuel as it can gain altitude and horizontal speed simultaneously.

Under international law, the nationality of the owner of a launch vehicle determines which country is responsible for any damages resulting from that vehicle. Due to this, some[who?] countries require that rocket manufacturers and launchers adhere to specific regulations in order to indemnify and protect the safety of people and property that may be affected by a flight.

In the US, any rocket launch that is not classified as amateur, and also is not "for and by the government," must be approved by the Federal Aviation Administration's Office of Commercial Space Transportation (FAA/AST), located in Washington, DC