Soyuz (Russian: Союз, meaning "union", GRAU index 11A511) is a family of expendable launch systems developed by OKB-1, and manufactured by TsSKB-Progress in Samara, Russia. According to the European Space Agency, the Soyuz launch vehicle is the most frequently used and most reliable launch vehicle in the world.[1]

The Soyuz vehicles are used as the launcher for the manned Soyuz spacecraft as part of the Soyuz program, as well as to launch unmanned Progress supply spacecraft to the International Space Station and for commercial launches marketed and operated by Starsem and Arianespace. All Soyuz rockets use RP-1 and liquid oxygen (LOX) propellant, with the exception of the Soyuz-U2, which used Syntin, a variant of RP-1, with LOX. In the United States, it has the Library of Congress designation A-2. The Soyuz family is a subset of the R-7 family.

The launcher was introduced in 1966, deriving from the Vostok launcher, which in turn was based on the 8K74 or R-7a intercontinental ballistic missile. It was initially a three-stage rocket with a Block I upper stage. Later a Molniya variant was produced by adding a fourth stage, allowing it to reach the highly elliptical molniya orbit. A later variant was the Soyuz-U.[2]

The production of Soyuz launchers reached a peak of 60 per year in the early 1980s. It has become the world's most used space launcher, flying over 1700 times, far more than any other rocket. It is a very old basic design, but is notable for low cost and very high reliability, both of which appeal to commercial clients.

In the early 1990s plans were made for a redesigned Soyuz with a Fregat upper stage. The Fregat engine was developed by NPO Lavochkin from the propulsion module of its Phobos interplanetary probes. Although endorsed by the Russian Space Agency and the Russian Ministry of Defence in 1993 and designated "Rus" as a Russification and modernisation of Soyuz, and later renamed Soyuz-2, a funding shortage prevented implementation of the plan. The creation of Starsem in July 1996 provided new funding for the creation of a less ambitious variant, the Soyuz-Fregat or Soyuz U/Fregat. This consisted of a slightly modified Soyuz U combined with the Fregat upper stage, with a capacity of up to 1,350 kg to geostationary transfer orbit. In April 1997, Starsem obtained a contract from the European Space Agency to launch two pairs of Cluster 2 plasma science satellites using the Soyuz-Fregat. Before the introduction of this new model, Starsem launched 24 satellites of the Globalstar constellation in 6 launches with a restartable Ikar upper stage, between September 22, 1999 and November 22, 1999. After successful test flights of Soyuz-Fregat on February 9, 2000 and March 20, 2000, the Cluster 2 satellites were launched on July 16, 2000 and August 9, 2000. Another Soyuz-Fregat launched the ESA's Mars Express probe from Baikonur in June 2003. Now the Soyuz-Fregat launcher is used by Starsem for commercial payloads. It is due to be replaced by the new launcher, now named Soyuz/ST (or Soyuz-2), which will have a new digital guidance system and a strongly modified third stage with a new engine. The first development version of Soyuz 2 called Soyuz-2-1a, which is already equipped with the digital guidance system, but is still propelled by an old third stage engine, started on November 4, 2004 from Plesetsk on a suborbital test flight, followed by an orbital flight on October 23, 2006 from Baikonur. The fully modified launcher (version Soyuz-2-1b) flew first on December 27, 2006 with the COROT satellite from the Baikonur Cosmodrome.

A long string of successful Soyuz launches was broken on October 15, 2002 when the unmanned Soyuz U launch of the Photon-M satellite from Plesetsk fell back near the launch pad and exploded 29 seconds after lift-off. One person from the ground crew was killed and eight injured. Another failure occurred on June 21, 2005, during a Molniya military communications satellite launch from the Plesetsk launch site, which used a four-stage version of the rocket called Molniya-M. The flight ended six minutes after the launch because of a failure of the third stage engine or an unfulfilled order to separate the second and third stages. The rocket's second and third stages, which are identical to the Soyuz, and its payload (a Molniya-3K satellite) crashed in the Uvatski region of Tyumen (Siberia).[3] On August 24, 2011, an unmanned Soyuz-U carrying cargo to the International Space Station crashed, failing to reach orbit.

Between February 1, 2003 and July 26, 2005 with the grounding of the US Space Shuttle fleet, Soyuz was the only means of transportation to and from the International Space Station. This included the transfer of supplies, via Progress spacecraft, and crew changeovers. Now that the Space Shuttle fleet is retired, the American space program is without any means to boost men into orbit, and NASA is entirely dependent on the Soyuz to send crew into space for the immediate future.

On 19 January 2005, the European Space Agency and the Russian Federal Space Agency agreed to launch Soyuz/ST rockets from the Guiana Space Centre.[4] The equatorial launch site will allow the Soyuz to deliver 2.7 to 4.9 tonnes into sun-synchronous orbit, depending on the third-stage engine used.[5] Construction of a new pad started in 2005 and was completed in April 2011. The pad used vertical loading common at Guiana, unlike the horizontal loading used at the Baikonur Cosmodrome.[6] A simulated launch was conducted in early May 2011.[7] The first operational launch happened on 21 October 2011, bearing the first two satellites in Galileo global positioning system.

The Molniya-M was also derived from the Soyuz family.

Soyuz rocket assembly: the first and second stages are in the background, already joined together; the third stage is in the lower left corner of the image. The Soyuz spacecraft, covered by its launch shroud, is in the lower right corner.

The rocket is assembled horizontally in the Assembly and Testing Building. The assembled rocket is transported to the launch site in its horizontal state and then raised. This is different from the vertical assembly of, for example, the Saturn V - one of the features which makes Soyuz cheaper to prepare for launch.

Assembling a horizontally positioned rocket is relatively simple as all modules are easily accessible. Also, assembling the rocket in vertical position would require a windproof highrise hangar, which was not considered economically feasible at the time the rocket was designed. 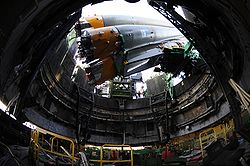 Since the launch pad has been eliminated, the bottom portion of the missile is lowered. The launch system trusses bear the wind loads. Resistance to high wind is an important feature of the launch system, as the Kazakhstan steppes, where the Baikonur launch site is located, are known for windstorms. 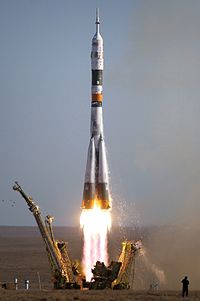 The launch of Soyuz TMA-9 atop a Soyuz-FG rocket.

The Soyuz LV[clarification needed] is used for various Russian unmanned missions and is also marketed by Starsem for commercial satellite launches. Presently the following fairing types are used:

Progress is the cargo spacecraft for unmanned missions to the ISS and previously to Mir. The spacecraft uses a dedicated platform and fairing and can be launched with either Soyuz-U, Souyz-FG or Soyuz-2.[citation needed]

S-type fairing is used for commercial launches by Starsem. The fairing has external diameter of 3.7 m and a length of 7.7 m. The Fregat upper stage is encapsulated in the fairing with the payload and a payload adapter/dispenser.[8] S-type fairing along with Fregat upper stage were used to launch the following spacecraft: Galaxy 14, GIOVE A, Mars Express, AMOS-2, Venus Express, Cluster.[9]

ST-type fairing is used for commercial launches by Starsem. Its external diameter is 4.1 m and its length is 11.4 m. It can be used with the Soyuz-2 only, because older analog control system cannot cope with aerodynamic instability introduced by a fairing as large as this. This carbon-plastic fairing is based on the proven configuration used for Arianespace’s Ariane 4 vehicles, with its length increased by approximately one additional meter.[11] The fairing has been developed and is being manufactured by TsSKB-Progress in accordance with the requirements of a customer (Starsem).[12] This will be the only fairing type offered by Starsem/Arianespace for launches from Kourou.[13]

Statistics (each of 4 boosters)[citation needed]

The second stage of the Soyuz booster is a single, generally cylindrical stage with one motor at the base. Like each of the first-stage rockets, it also has four combustion chambers and one set of turbopumps, but four (instead of two) vernier combustion chambers. The second stage tapers toward the bottom to allow the four first stage rockets to fit more closely together.

There are two variant upper stages in use, the Block I and Improved Block-I (used in Soyuz-2-1b).