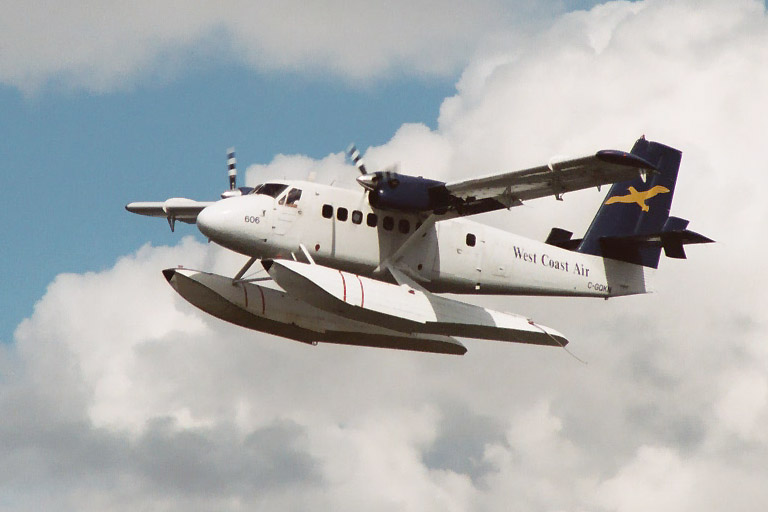 The DHC-6 Twin Otter is a 20-passenger (Short Takeoff and Landing) utility developed by . It has often been called the most successful aircraft program in Canada's history. The aircraft's fixed tricycle undercarriage, STOL abilities and relatively high rate of climb have made it a successful cargo, regional passenger airliner and aircraft. In addition, the Twin Otter has been popular with commercial skydiving operations.

Development of the aircraft began in 1964, with the first flight on . A twin-engined replacement for the single-engined Otter had been planned by de Havilland Canada. Twin engines not only provided improved safety but also allowed for an increase in payload while retaining the renowned STOL qualities. Design features included double slotted trailing edge flaps and ailerons that work in unison with the flaps to boost STOL performance. The availability of the 550 shp Pratt and Whitney Canada PT6A-20 propeller turbine engine in the early 1960s made the concept of a twin more feasible. To bush operators, the enhanced reliability of turboprop power and the enhanced performance of a twin-engined configuration made it an immediately popular alternative to the single engine, piston-powered Otter which had been flying since 1951.

The first six aircraft produced were designated Series 1, indicating that they were prototype aircraft. The initial production run consisted of Series 100 aircraft, serial number seven to 115 inclusive. In 1968, Series 200 production began with serial number 116. Changes made at the beginning of Series 200 production included improving the STOL performance, adding a longer nose that was equipped with a larger baggage compartment (except to aircraft fitted with floats) and fitting a larger door to the rear baggage compartment. All Series 1, 100 and 200 aircraft and their variants (110, 210) were fitted with the 550 shaft horsepower PT6A-20 engines.

In 1969, the 300 series was introduced, beginning with serial number 231. Both aircraft performance and payload were improved by fitting more powerful PT6A-27 engines. This was a 680 hp engine that was flat-rated to 620 hp for use in the Series 300 Twin Otter. The Series 300 proved to be the most successful variant by far, with 614 Series 300 aircraft and their sub-variants (Series 310 for United Kingdom operators, Series 320 for Australian operators, etc.) sold before production ended in 1988.

Twin Otters could be delivered directly from the factory with s, s or fittings, making them adaptable s for remote and northern areas including Canada and the , specifically . Many Twin Otters still serve in the far north, but they can also be found in Africa, Australia, Antarctica and other regions where bush planes are the optimum means of travel. Their versatility and maneuverability have made them popular in areas with difficult flying environments, including Papua New Guinea. In , the Twin Otter paved the way for the network of short-field airports, connecting the rural areas with the larger towns with outstanding reliability, and remained in service until 2000 on certain routes. of Norway was, at one time, the world's largest operator of Twin Otters. During one period of its tenure in Norway, the Twin Otter fleet achieved over 96,000 cycles (takeoff, flight and landing) per year.

Twin Otters, rated for flight down to −75°C (−103°F), [ [http://www.nsf.gov/od/lpa/news/press/01/pr0129.htm NSF PR 01-29—Civilian Aircraft to Evacuate South Pole Patient] ] are a staple of Antarctic transportation. Four Twin Otters are employed by the on research and supply flights, and several are employed by the via contract with . On –25 , two Twin Otters performed the only winter flight to to perform a medical evacuation. [ [http://www.70south.com/resources/evacuations/2001-southpole 2001—Doctor Evacuated from the South Pole] ] [ [http://www.usatoday.com/news/science/cold-science/doctor/2001-04-27-pilot.htm Pilot says pole flight wasn't his most challenging] ] [ [http://www.cbc.ca/news/story/2001/05/03/antarctic_bas_010503.html Pilots return after historic South Pole rescue] ]

As of August , a total of 584 Twin Otter aircraft (all variants) remain in service worldwide. Major operators include: (16), (17), (15), (33) and (11). Some 115 airlines operate smaller numbers of the aircraft including in Nepal and the British Airways subsidiary airline, .

's Ministry of Natural Resources is also a long-time operator of the Otter.

The Twin Otter has been popular with commercial skydiving operations. It is generally limited to carrying 22 [hauling loads of up to 22 skydivers to over 13,500' [http://www.skydiveorange.com/Otter.htm] ] jumpers (a relatively large load compared to most other aircraft in the industry); presently, the Twin Otter is used in skydiving operations in many countries. The operates three Twin Otters for the 's skydiving team. The cadets affectionately call the aircraft the "'Twotter."

After series production ended, the remaining tooling was purchased by of Victoria which manufactures replacement parts for all of the out of production de Havilland Canada aircraft. On , Viking purchased the s from for all the out of production de Havilland DHC-1 through DHC-7 aircraft. [ [http://aiabc.com/artman/publish/printer_47.shtml Viking acquires DeHavilland type certificates] Press Release, .] The ownership of the certificates gives Viking the exclusive right to manufacture new aircraft.

On , at the , Viking Air announced its intention to offer a "Series 400" Twin Otter. [ [http://www.vikingair.com/content.aspx?id=1742] Press Release ] Restarting the production would be dependent on the ability to realize enough initial orders.

In April 2007, Viking announced that it would restart production of the Twin Otter with a more powerful PT6A-34/35 engine. [ [http://www.flightglobal.com/Articles/2007/04/02/212989/viking-restarts-twin-otter-production.html Viking restarts Twin Otter production] ] At the time, Viking had 27 orders and options in hand. As of November 2007, 40 firm orders and 10 options have been taken and a new assembly plant has been established in with with customer deliveries commencing summer 2009.

On , the Series 400 Technology Demonstrator achieved "power on" status in advance of an official rollout. [http://www.vikingair.com/content.aspx?id=1742] [http://www.canada.com/vancouversun/news/business/story.html?id=0b77b24c-42d4-45b4-a3d6-cf36ba3fdda9] First flight of the Series 400 technical demonstrator, C-FDHT, took place 1 October 2008 at Victoria Airport.Fact|date=October 2008 The next day, the aircraft departed Victoria for a ferry flight to Orlando, Florida, site of the 2008 NBAA Conference and exhibition.

Major changes introduced with the Series 400 include Honeywell Primus Apex fully integrated avionics, deletion of the AC electrical system, deletion of the beta backup system, modernization of the electrical and lighting system, and use of composites for non load bearing structures such as doors.Fact|date=October 2008

* In, 1981, a (FAP-205) DHC-6 crashed, killing all passengers and crew including General .Fact|date=October 2008
* killed all passengers and crew.
* On , a de Havilland Twin Otter impacted a mountaintop shortly before a landing attempt in Nepal near the airport in Lukla; at least 18 people died in the incident. [http://www.avherald.com/h?article=40df1dd9&opt=0]