South Africa is divided into 52 districts (Metropolitan and District municipalities). The 12th amendment to the Constitution (December 2005) reduced this number from 53. Another effect of this amendment is that each district is now completely contained within a province, thus eliminating cross-border districts. The districts also cover the entire area of the continental republic. South Africa's districts are analogous to counties in Great Britain and the United States.

The following map depicts the provinces and districts of South Africa. The district municipalities are labelled with numbers that correspond to their district code, while the metropolitan municipalities are labelled with letters that correspond to their names. Further details of the districts are listed in the table that follows the image. 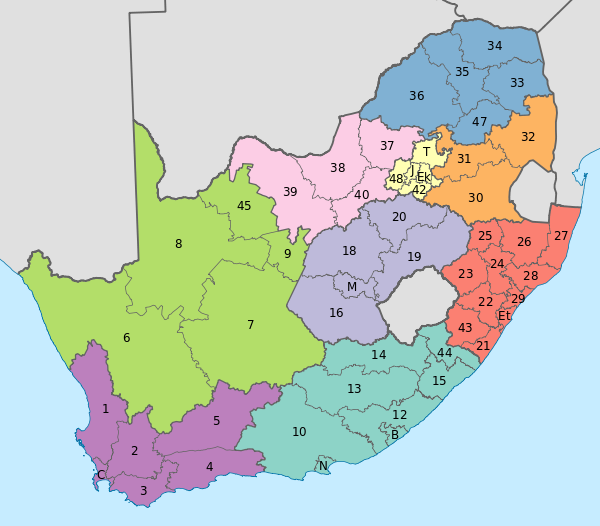 Several projects are underway to align various services with the district boundaries.[1] These include:

South Africa's official opposition, the Democratic Alliance, believes that the districts add an unnecessary fourth layer of government (between provinces and municipalities) and has called for them to be eliminated.[2]