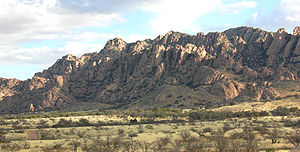 Dragoon Mountains, where Cochise hid with his warriors

Cochise (or "Cheis") was one of the most famous Apache leaders (along with Geronimo) to resist intrusions by Americans during the 19th century. He was described as a large man (for the time), with a muscular frame, classical features, and long black hair which he wore in traditional Apache style. He was about 5'10" tall and weighed about 175 lbs.[3] In his own language, his name "Cheis" meant "having the quality or strength of oak."[4]

Cochise and the Chokonen-Chiricahua lived in the area that is now the northern Mexican region of Sonora, New Mexico, and Arizona, which they had moved into sometime before the coming of the Europeans.[5] As Spain and later Mexico attempted to gain dominion over their lands, the various Chiricahua groups became increasingly resistant. Cycles of warfare developed, which the Apaches mostly won. Eventually, the Spanish tried a different approach; they tried to make the Apaches dependent (thereby placating them) upon poor-quality firearms and liquor rations issued by the colonial government (this was called the "Galvez Peace Policy"). After Mexico wrested control of the territory from Spain, and didn't have the resources (and/or possibly the will) to continue it, the practice was ended. It had worked for quite a number of years, but the various Chiricahua bands resumed traditional raiding to acquire what they needed after the Mexicans no longer made provisions for them (in the 1830s).

As a result, the Mexican government began a series of military operations in order to either capture or neutralize the Chiricahuas, but they were fought to a standstill by the Apaches. As part of their attempts at controlling the Chiricahuas, Mexican forces began to kill Apache civilians. Often times this would be accomplished with the help of American and Native American mercenaries, and paying bounties for scalps was not uncommon. Cochise's father was one of these victims. This hardened Cochise's resolve and gave the Chiricahuas Apaches more rationale for vengeance. Mexican forces did capture Cochise at one point in 1848 during an Apache raid on Fronteras, Sonora, but they exchanged him for nearly a dozen Mexican prisoners.

The region inhabited by the Apache had experienced strife and tension between the Apache and European settlers beginning with Spanish occupation around 1600 until the greater part of the area was acquired by the United States in 1850, which ushered in a brief period of relative peace. In the late 1850s, Cochise may have even supplied firewood for the Butterfield Overland Mail stagecoach station at Apache Pass.[6]

The tenuous peace did not last as American encroachment into Apache territory continued, ending in 1861 with the Bascom Affair. An Apache raiding party had driven away a local rancher's cattle and kidnapped his twelve-year-old son (Felix Ward, who later became known as Mickey Free). Cochise and his band were falsely accused of the incident (which had actually been perpetrated by Coyotero Apaches).[5] An unsuspecting Cochise was invited to the Army's encampment by an inexperienced Army officer (Lt. George Bascom), who assumed that Cochise was responsible. Although the Apache leader truthfully maintained his innocence, and offered to look into the matter with other Apache groups, the young officer attempted to arrest him. Cochise jumped to his feet and immediately escaped by drawing a knife and slashing his way out of the tent.[5] Cochise may have been shot as he fled.[5] Bascom did succeed in capturing some of Cochise's relatives, who apparently were caught by surprise as Cochise escaped. Cochise eventually also took hostages to use in negotiations to free the other Indian hostages.[5] However, the negotiations fell apart, mostly because of Bascom's intransigence, but also because the arrival of more U.S. troops made Cochise believe that the situation was spiraling out of his control. Both sides eventually killed all their remaining hostages, and the Apache leader went to Mexico while things cooled off. Cochise's brother and two of his nephews were among the hostages executed by Bascom, which served to further enrage the Apache leader and foment about 11 years of relentless warfare which left southern Arizona a mostly burned-out wasteland (in terms of white and Mexican civilization). The death toll may have reached as many as 5,000 settlers and travelers (many historians believe this number is an extreme exaggeration, that the toll was more likely a few hundred).[7][8] The treachery of Lt. Bascom is still remembered by the Chiricahuas' descendants today—they remember it as "Cut the Tent."[9]

Cochise joined with his father-in-law Mangas Coloradas (Red Sleeves, Kan-da-zis Tlishishen), the powerful Chihenne-Chiricahua chief, in a long series of retaliatory skirmishes and raids on the white settlements and ranches.[5] The Battle of Dragoon Springs was one of these engagements. During the raids, many people were killed on both sides, but the Apaches quite often had the upper hand, mostly because the United States was distracted by its own internal conflict—the looming Civil War, and did not have the resources in the area to deal with the Apaches from any position of strength. Additionally, the Apaches' were highly adapted to living and fighting in the hostile and unforgiving terrain of the southwest. It was many years before the Army, using tactics conceived by General Crook[10] and later adopted by General Miles,[11] were able to effectively challenge the Apache fighter on his own lands. 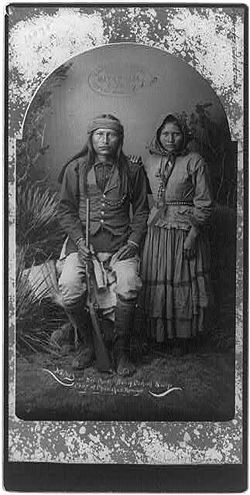 At Apache Pass in 1862, Cochise and Mangas Coloradas, with around 500 fighters, held their ground against a New Mexico-bound force of California volunteers under General James Henry Carleton until caisson-mounted howitzer artillery fire was brought to bear on their positions in the rocks above.

According to scout John C. Cremony and historian Dan L. Thrapp, the howitzer fire sent the Apaches into an immediate retreat. But Carleton's biographer, Aurora Hunt, wrote, "This was the first time that the Indians had faced artillery fire. Nevertheless, they fought stubbornly for several hours before they fled." Geronimo later recalled in his autobiography that his people were winning the fight until "you fired your wagons at us." The Battle of Apache Pass was one of the rare pitched battles the Apaches fought against the United States Army. Normally, the Apaches' tactics involved "guerrilla-style" warfare. Capt. Thomas Roberts was persuaded by the engagement that it would be best to find a route around Apache Pass, which he did. Gen. Carleton thus continued unhindered to New Mexico and subsequently took over as commander of the territory.

In January 1863 Gen. Joseph Rodman West, under orders from Gen. Carleton, was able to capture Mangas Coloradas by duping him into a conference under a flag of truce. During what was to be a peaceful parley session, the Americans took the unsuspecting Mangas Coloradas prisoner and later murdered him.[12] This was just one more in a series of incidents that fanned the flames of enmity between the encroaching Americans and the Apache. For Cochise, the Americans held nothing sacred and had violated the rules of war by capturing and killing Mangas Coloradas during a parley session. Cochise and the Apaches continued their raids against American and Mexican settlements and military positions throughout the 1860s. Following various skirmishes, Cochise and his men were gradually driven into the Dragoon Mountains but were nevertheless able to use the mountains for cover and as a base from which to continue attacks against the white settlements. Cochise managed to evade capture and continued his raids against white settlements and travelers until 1872. A treaty was finally negotiated by General Oliver O. Howard with the help of Tom Jeffords, who was Cochise's only white friend. A best-selling novel by Elliott Arnold in 1947 titled Blood Brother gives a fictionalized account of the latter part of this struggle and the friendship between Jeffords and Cochise.[13] In 1950, director Delmar Daves turned Arnold's novel into a movie re-titled Broken Arrow, featuring James Stewart as Jeffords and Jeff Chandler as Cochise . This was one of the first Hollywood movies to give a sympathetic picture of Native Americans in conflict with European Americans encroaching upon Indian land, and helped change the popular image of Native American people from negative to positive. The tall, handsome, deeply tanned Chandler, a Jewish actor born in Brooklyn, N.Y., portrayed Cochise as a noble, nearly tragic character forced to fight against the treacherous U.S. Army officers who led incursions into Apache territory.[14]

After making peace, Cochise retired to his new reservation, with his friend Jeffords as agent, where he died of natural causes (probably abdominal cancer) in 1874. He was buried in the rocks above one of his favorite camps in Arizona's Dragoon Mountains, now called Cochise Stronghold. Only his people and Tom Jeffords knew the exact location of his resting place, and they took the secret to their graves.

Cochise's descendants are said to currently reside at the Mescalero Apache Reservation, near Ruidoso, New Mexico.[5]