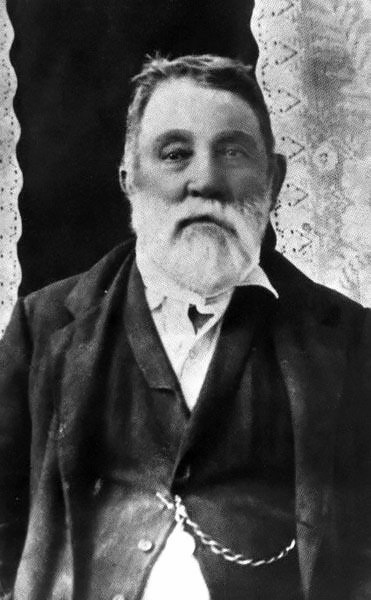 Phantly Roy Bean (c. 1825 &ndash; , ) was an eccentric U.S. saloon-keeper and who called himself "The Law West of the Pecos". According to legend, Judge Roy Bean held court in his saloon along the in a desolate stretch of the of west Texas.

Roy Bean was born in 1825 in , the youngest of three sons of Phantley Roy and Anna Henderson Gore Bean. The family was extremely poor, and at age sixteen Bean left home to ride a flatboat to . There, he found himself in trouble and fled to , where his brother Sam was a teamster hauling freight to Mexico.

Bean was considered young and handsome and competed for the attentions of various local girls. A Scotsman named Collins challenged Bean to a pistol shooting match on horseback. Bean was left to choose the targets, and decided that they would shoot at each other. The duel was fought on , , ending with Collins receiving a wound to his right arm.

In 1854, Bean courted a young lady, who was kidnapped and forced to marry a Mexican officer. Bean challenged the groom to a duel and killed him. Six of the dead man's friends put Bean on a horse and tied a noose around his head, then left him to hang. The horse did not bolt, and after the men left, the bride, who had been hiding behind a tree, cut the rope. Bean was left with a permanent rope burn on his neck and a permanent stiff neck.

During the Civil War, the Texas army invaded New Mexico. After the in March 1862, the Texans began retreating to San Antonio. After first taking money from his brother's safe, Bean joined the retreating army. For the remainder of the war, he ran the blockade by hauling cotton from San Antonio to British ships off the coast of , then returning with supplies.

On , , he married eighteen-year-old Virginia Chavez. Within a year after they were married he was arrested for aggravated assault and threatening his wife's life.

By the late 1870s, Bean was operating a saloon in Beanville. Several railroad companies were working to extend the railroads west, and Bean heard that many construction camps were opening.

Justice of the peace

With his earnings, Bean purchased a tent, some supplies to sell, and ten 55-gallon barrels of whiskey. By the spring of 1882, he had established a small saloon near the in a tent city he named Vinegaroon. Within a 20 mi (32 km) stretch of the tent city were 8,000 railroad workers. The nearest court was 200 mi (321 km) away at , and there was little means to stop the illegal activity. A Texas Ranger requested that a local law jurisdiction be set up in Vinegaroon, and on , Bean was appointed the for the new Precinct 6 in Pecos County.

Bean did not allow hung juries or appeals,

Langtry did not have a jail, so all cases were settled by fines. Bean refused to send the state any part of the fines, but instead kept all of the money. In most cases, the fines were made for the exact amount in the accused's pockets. Bean is known to have sentenced only two men to hang, one of whom escaped. Horse thieves, who were often sentenced to death in other jurisdictions, were always let go if the horses were returned.

Bean won re-election to his post in 1884, but was defeated in 1886. The following year, the commissioner's court created a new precinct in the county and appointed Bean the new justice of the peace. He continued to be elected until 1896. Even after that defeat, he "refused to surrender his seal and law book and continued to try all cases north of the tracks".

In 1890, Bean received word that was planning to pass through Langtry on a special train. Bean flagged down the train with the danger signal; thinking the bridge was out, the train engineer stopped. Bean invited Gould and his daughter to visit the saloon as his guests. The Goulds visited for two hours causing a brief panic on the when it was reported that Gould had been killed in a train crash. [Davis (1985), p. 169.]

In 1896, Bean organized a world championship title bout between and Peter Maher on an island in the because boxing matches were illegal in Texas. The fight lasted only 1 minute, 35 seconds, but the resulting sport reports spread his fame throughout the . [Davis (1985), p. 170.]

As he aged, Bean spent much of his profits to help the poor of the area, and always made sure that the schoolhouse had free firewood in winter. [Davis (1982), p. 172.] He died , , peacefully in his bed, after a bout of heavy drinking and was buried at the Whitehead Museum in .

* "" (1972) is a heavily fictionalized biopic of the judge starring in the title role.