"This article is about the city in New Mexico, USA. For other uses see ." 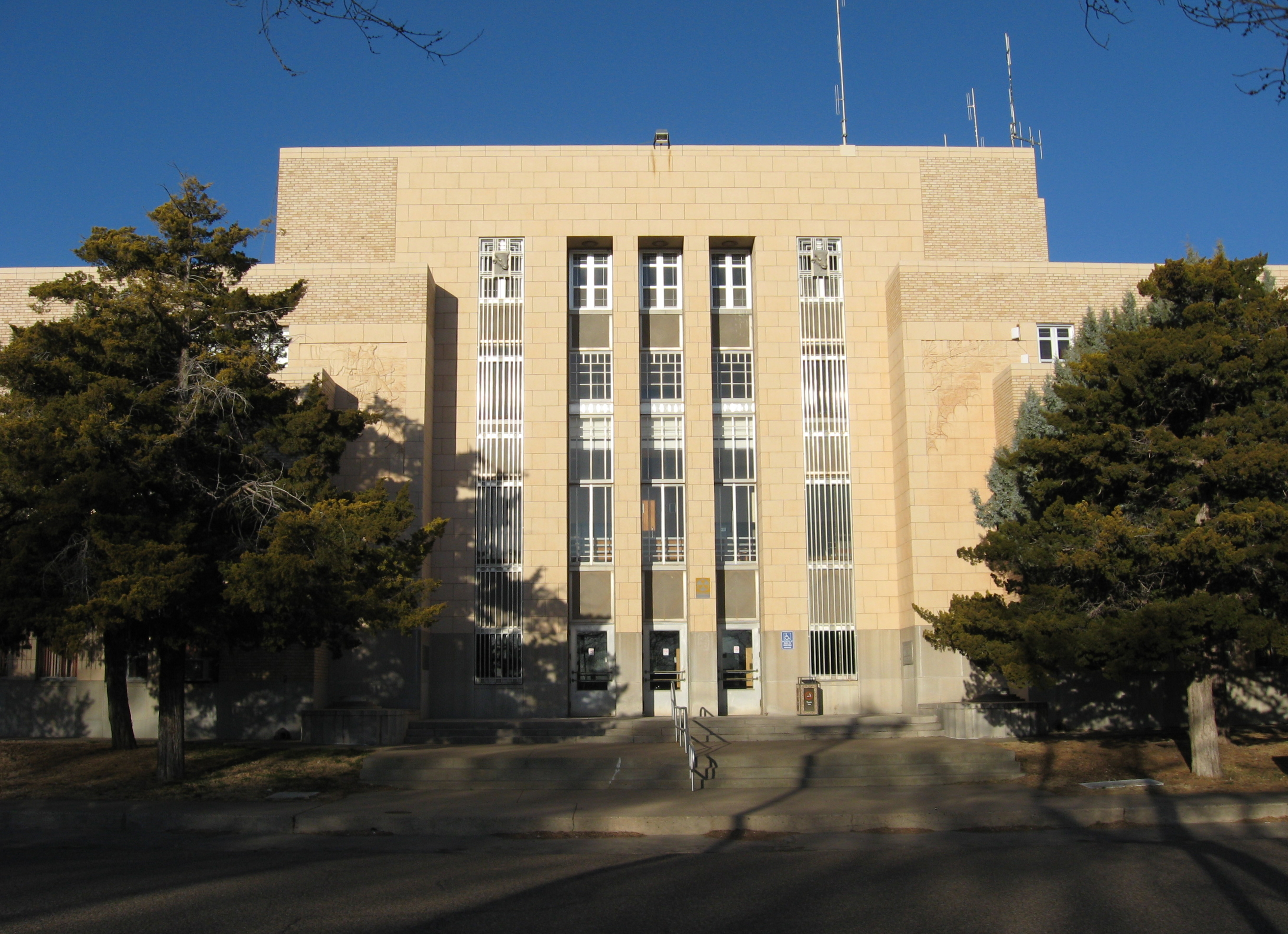 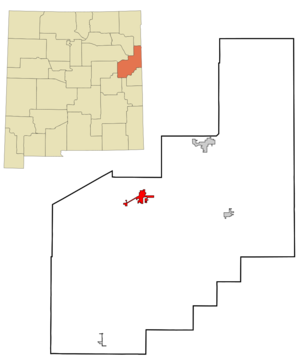 Tucumcari is a city in Quay County, , . The population was 5,989 at the 2000 census. It is the of Quay County.GR|6 Tucumcari was founded in 1901. Quay County was founded two years later. [ [http://www.usbr.gov/dataweb/html/tucumcari.html Tucumcari Project ] ]

In 1901, the Chicago Rock Island and Pacific Railroad built a construction camp in the western portion of modern-day Quay County. Owing to numerous gunfights, the camp became known as Six Shooter Siding. After it grew into a permament settlement, it was renamed Tucumcari in 1908. The name was taken from , which sat nearby the community. [cite web|title=Photo Guide:T|publisher=Southwest Collection Library|url=http://www.swco.ttu.edu/Guide/Photo/Tph.htm|acccessdate=2008-09-18]

There were 2,489 households out of which 29.8% had children under the age of 18 living with them, 45.4% were married couples living together, 15.3% had a female householder with no husband present, and 35.4% were non-families. 31.7% of all households were made up of individuals and 14.7% had someone living alone who was 65 years of age or older. The average household size was 2.35 and the average family size was 2.93.

Legend has it that Apache Chief Wautonomah was nearing the end of his time on earth and was troubled by the question of who would succeed him as ruler of the tribe. In a classic portrait of love and competition, his two finest braves, Tonopah and Tocom, were not only rivals and sworn enemies of one another, but were both vying for the hand of Kari, Chief Wantonomah's daughter. Kari knew her heart belonged to Tocom. Chief Wautonomah beckened Tonopah and Tocom to his side and announced, "Soon I must die and one of you must succeed me as chief. Tonight you must take your long knives and meet in combat to settle the matter between you. He who survives shall be the Chief and have for his squaw, Kari, my daughter."As ordered, the two braves met, with knives outstretched, in mortal combat. Unknown to either brave was the fact that Kari was hiding nearby. When Tonopah's knife found the heart of Tocom, the young squaw rushed from her hiding place and used a knife to take Tonopah's life, as well as her own.

When Chief Wautonomah was shown this tragic scene, heartbreak enveloped him and he buried his daughter's knife deep into his own heart, crying out in agony, "Tocom-Kari"!

A slight variation of the Chief's dying words live on today as "Tucumcari", and the mountain which bares this name stands as a stark reminder of unfulfilled love.

Some credit this folktale to Geronimo. More skeptical and less romantic historians believe the word "Tucumcari" is a derivation from the Comanche word "tukanukaru", which means to lie in wait for something. There's historical veracity to this explanation, since the mountain (actually a ) was known to be a Comanche lookout many years ago.

*Many of the scenes in the show "Rawhide" (1959-1966) starring were shot in the Tucumcari area. [ [http://jcgi.pathfinder.com/time/magazine/article/0,9171,869242,00.html Aloha & Ballyhoo - TIME ] ]
*One of the killers in 's 1965 book "In Cold Blood" asks about the travelling distance to Tucumcari. This scene appears in the 1967 film version of the novel.
*Tucumcari is the setting of one of the first scenes in 's 1965 film "", starring Eastwood, , and . However, this is an unfortunate since Tucumcari was founded many years after "For a Few Dollars More" takes place.
*A scene in the 1971 movie "", starring , , and , was filmed at a gasoline service station on U.S. Highway 54 just northeast of Tucumcari. Tucumcari Mountain is clearly visible at the beginning of this scene.
*The city is mentioned in the 1988 film "" by the character played by . However, the location in the scene is clearly not Tucumcari.
*In the 2005 episode "Bugs" of the television show "Supernatural", the character played by states they will pass through Tucumcari on the way to .
*Tucumcari is portrayed as a harsh trade town in the post-apocalyptic role-playing game, .

For many years, Tucumcari has been a popular stop for cross-country travelers on (formerly in the area). It is the largest city on the highway between and . reading "TUCUMCARI TONITE!" placed along I-40 for many miles to the east and west of the town invite motorists to stay the night in one of Tucumcari's "2000" (later changed to "1200") motel rooms. The "TUCUMCARI TONITE!" campaign was abandoned in favor of a campaign which declared Tucumcari, "Gateway to the West". However, on , , Tucumcari's Lodgers Tax Advisory Board, the group responsible for the billboards, voted to return to the previous slogan. [ [http://www.abqjournal.com/abqnews/content/view/7713/39 "Albuquerque Journal" 'Tucumcari Tonite' Returns to Billboards] ]

Old U.S. Route 66 runs through the heart of Tucumcari via Route 66 Boulevard, which was previously known as Tucumcari Boulevard from 1970 to 2003 and as Gaynell Avenue before that time. Numerous businesses, including gasoline service stations, restaurants and motels, were constructed to accommodate tourists as they traveled through on the Mother Road. A large number of the vintage motels and restaurants built in the 1930s, 1940s, and 1950s are still in business despite intense competition from newer chain motels and restaurants in the vicinity of Interstate 40, which passes through the city's outskirts on the south.

Also located in the downtown area are the concrete arches that once surrounded the Vorenburg Hotel, which was demolished in the 1970s after being damaged by fire.

The city has the honor of having a hydrofoil name after it. The USS Tucumcari (PGH-2) was built by . It began service in 1968 and ended service in 1972 after running aground in .

Tom "Black Jack" Ketchum and his associates robbed a post office and store in Liberty, NM, a community that dissolved after the railroad bypassed it. Many of Liberty's residents moved to the nearby railroad siding that eventually became Tucumcari.

In December 1951, a water storage tank collapsed in the city. Four were killed and numerous buildings were destroyed.

The buildings at Metropolitan Park (locally known as "Five Mile Park" because it is located about five miles outside of town) were designed by Trent Thomas, adapted from his design of La Fonda Hotel in Santa Fe. The park once featured New Mexico's largest outdoor swimming pool. Owing to deterioration, Metropolitan Park was named to the New Mexico Heritage Preservation Alliance's list of Most Endangered for 2003. [ [http://www.nmheritage.org/endangered/2003.php?ID=75 NMHeritage.org: Resources: NM Preservation Resources ] ] The cost for complete renovation is estimated at ten million dollars.

Each year since 1992, the town has held the Tucumcari . The show held on October 4, 2006, was cancelled after one hour when a single-engine plane crashed, resulting in the pilot's death. [ [http://www.kvii.com/news/news_story.aspx?id=18603 Fatal accident at air show : News : KVII ] ]

Rex Maddaford, who competed for the team in the , has been a long-time Tucumcari Public Schools faculty member. He is currently a teacher at Tucumcari High School. [http://www.qcsunonline.com/engine.pl?station=quay&template=storyfull.html&id=1340]