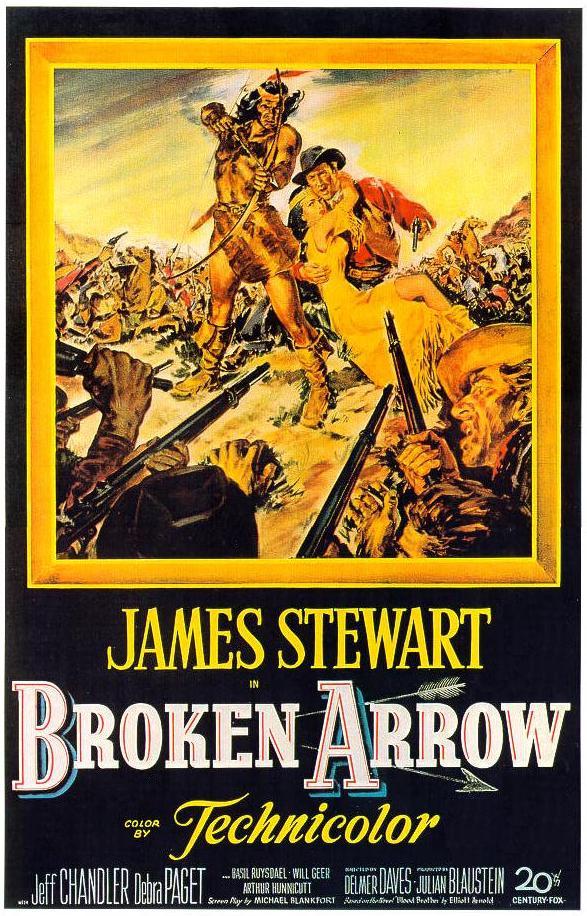 
"Broken Arrow" is a western film released in . It was directed by and starred James Stewart and Jeff Chandler. The film was nominated for three , and won a for "Best Film Promoting International Understanding." It made history as the first major Western since the to side with the Indians.

The main characters are (Jeff Chandler) and (James Stewart). The film is based on the actions of these historical figures, but tells their story in dramatized form. Jeffords is responsible for mail delivery in the Arizona Territory in 1862. When Apache raiding parties shoot up some of his mail couriers, he rides alone to the camp of Cochise to parley for their safe passage. This act of bravery so impresses the chief that he becomes friend and blood brother to Jeffords. Their friendship is instrumental in ending the decade-long Apache war.

Apache chief , a major figure in the historical events but a minor character in this film, was played by , an actual Native American best known for his television role as "Tonto", "faithful Indian companion" to 's "Lone Ranger". In the film, he refuses to make peace, so Cochise banishes him and the chiefs who follow him. Later, some of Cochise's warriors rescue Jeffords and a wagon from Geronimo's renegades, which strengthens the cause of peace.

General () in the movie has a role like his real life one in signing the treaty. He is accurately played with his right arm missing, and as "the Christian General". This Howard character says that his troops call him "Bible-reading Howard". On questioning by Jeffords about the biblical implications for the Indians, Howard condemns racism, saying that the Bible "says nothing about pigmentation of the skin." Jeffords tells him to read the Bible for him, "because I like the way you read it."

A fictional character Sonseeahray (Debra Paget) was added as a love interest for Jeffords. They marry for love, but she is killed when some whites who don't want peace treacherously try to ambush Cochise and Jeffords. Jeffords is wounded, but Cochise escapes, killing several of his attackers. Howard and the army pay their respects at the Apache camp, and assure Jeffords that Sonseeahray's death will not be in vain.

Most western films of the period portrayed American Indians as implacably hostile to the white settlers entering their domain, while the settlers were shown as peaceable people forced to defend themselves. "Broken Arrow" is noteworthy for being one of the first western films to portray Native Americans in a balanced, sympathetic way. "Chronicle of the Cinema" describes it thus: "Based on verifiable fact, it faithfully evokes the historical relationship between Cochise and Jefford (sic), marking an historical rehabilitation of Indians in the cinema."

In addition to the fictional Sonseeahray, the film does introduce distortions of the historical record. Nevertheless, its director Delmer Daves was justifiably praised for bucking a film-making convention of the time and showing Native Americans as something other than "bloodthirsty savages".

The was written for this movie.

*The movie's world premier was at the Nusho Theater in downtown .