The National Defence Radio Establishment (Swedish: Försvarets radioanstalt, FRA) is a civilian establishment subordinate to the Ministry of Defence. The two main tasks of FRA are signals intelligence (COMINT and SIGINT/ELINT) and support to government authorities and state owned companies regarding IT security.

Oversight and decisions regarding information interception is provided by the Defence Intelligence Commission, "Statens inspektion för försvarsunderrättelseverksamheten" (a committee subordinate to the Government responsible for assuring that all interception is done according to Swedish law) and The Swedish Data Inspection Board.

The main headquarters is located on the island of Lovön in Stockholm County. FRA was assigned a budget of 562 million SEK in 2008 and has around 650 employees.

Signals Intelligence has existed in Sweden since 1905 when Swedish General Staff and Naval Staff respectively, had departments for signals intelligence and cryptanalysis. These departments succeeded, for instance, to decode the Russian Baltic Sea Fleet cipher. After World War I, this ability mostly ceased as politicians did not see its value and did not grant funding. The Swedish Navy still continued in a smaller scale and developed the competence further. One of the first major successes was in 1933 when the cipher of the Russian OGPU (predecessor to KGB) was solved.

In 1937, the Swedish Defence Staff was established and the Crypto Department, with its Crypto Detail IV, was responsible for cryptanalysis. In 1940, when Germany occupied Denmark and Norway, the German Wehrmacht requested to use the Swedish telephone network for its communication. This was accepted and Crypto Detail IV immediately started to intercept. The traffic was almost always encrypted by the German state-of-the-art cipher machine Geheimfernschreiber. This device was believed to produce indecipherable messages, with its 893,622,318,929,520,960 different crypto key settings. After two weeks of single hand work, the Swedish professor of mathematics Arne Beurling decoded the cipher of the G-schreiber with only use of pencil and paper. This achievement was described by David Kahn, in his book The Codebreakers: "Quite possibly the finest feat of cryptanalysis performed during the Second World war was Arne Beurling's solution of the secret of the G-schreiber." During World War II, some 296,000 German messages were intercepted and possibly[speculation?] as a result of this, the Swedish Government took the decision in 1942 to establish Försvarets Radioanstalt.

The first stationary collection site was located in the middle of Stockholm, but in 1940 it was moved to a number of villas in the suburban island of Lidingö. More sites were established in Sweden and in 1943, FRA moved its headquarters to Lovön, some 15 km from Stockholm. In the 1960s, even the location of the FRA headquarters was still highly secret.[2] 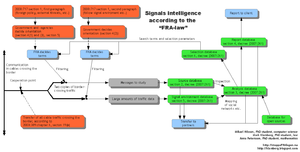 An ever-increasing amount of communications has, due to technology development, in recent years been transferred from radio transmissions to cables. To secure FRA's ability to continue its operations, the question of enabling FRA to collect information from cable communication was addressed by the government in 2003 in a committee report regarding review of FRA (SOU 2003:30). The promemoria (Ds 2005:30) "Updated National Defence Intelligence Operations" with suggested legislation was compiled in 2005 by the Social Democratic cabinet. It was remitted, following common practice, to some 90 agencies and organisations the same year.[3]

On 18 June 2008, Proposition 2006/07:63, "the FRA law", was accepted by the Parliament of Sweden (Riksdag), and accordingly FRA was given legal permission to tap communication cables passing the Swedish national borders. The law has been in effect since 1 January 2009. A large public opinion and many experts protested against the increased surveillance by demonstrating and using new media channels like blogs and web pages. Also, a number of members of parliament expressed their doubts towards the new law.

On 25 September 2008, the government informed that the ruling coalition parties had agreed on supplements to the FRA law that would strengthen the integrity aspect. Some modifications were indeed accepted by the Parliament of Sweden on 14 October 2009, with 158 votes for and 153 against; one of the main critics within the ruling coalition abstained. The opposition voted against, and a spokesman declared that if they win the elections in 2010, they will annulate the law, restarting from scratch[4].

In the final stage of the Finnish Continuation War, 1943–44, when the Soviet Union threatened to occupy Finland, Finnish intelligence requested to transfer about 200 specialists and advanced intelligence equipment to Sweden to establish an exile organisation. A transfer of a small contingent personnel and materials, operation Stella Polaris, was carried out over a couple of nights in September 1944. Stella Polaris gave Sweden access to a wealth of qualified materials and signals intelligence officers, some of which were also employed. For Finland, it resulted in a domestic political affair and due to the Communist Party's strong influence in the government, several of the so-called "Soviet Hostiles" involved received prison sentences.[5]

On 13 June 1952, the Swedish Air Force aircraft Tp 79 Hugin (DC-3) disappeared during a radar reconnaissance mission east of the Swedish island of Gotland. The Swedish government initially claimed that the flight was only a navigational exercise, but later admitted that the aeroplane had U.S. electronic surveillance equipment and five specialists from FRA onboard. Three days later, a Swedish Air Force search-and-rescue plane of the type Tp 47 (Catalina) was shot down by a Soviet MiG-15 fighter, but the crew was rescued by a nearby West German freighter ship. The Soviet Union denied any involvement in the disappearance of the DC-3, despite the fact that a raft from the aeroplane was found during the search with shrapnel from MiG-15 ammunition. In 1956, the Soviet leader Nikita Khrushchev admitted to Swedish Prime Minister Tage Erlander that the Soviet union was indeed responsible for shooting down the plane, but this was not made public, not even to the relatives of the crewmen. Russia officially acknowledged the shooting down in 1991. In 2003, the wreck of the shot-down DC-3 was found about 55 km east of Gotland. Several of the crewmen's remains were found in the fuselage and the damage to the plane showed that it really had been shot at by a Soviet MiG-15 fighter.

At a demonstration in May 2008, in connection with protests concerning the FRA-law, parts of a recording from 2006, between Rickard Falkvinge and FRA's Director General Anders Wik, were played.[6] The conversation was recorded without Wik's knowledge. In the conversation, Wik says that FRA also intercepts telephone calls and that this type of signal interception is not subject to existing Swedish law. Max Anderson, MP for the Green Party, called in 2008 for an investigation into whether this was in violation of Swedish Law. Defence Minister Sten Tolgfors responded to the call for investigation with, "Such intelligence activity has not been considered to need explicit legal support since it is conducted by direct order of the government with the support of the principle of the air of freedom, as expressed in the Act (2003:389) on electronic communications (Chapter 6. 17 §)" and that there was therefore "no need for investigation".

Top500 credited FRA with owning the world's 5th fastest supercomputer in their November 2007 list.[9][10] According to Jonas Strömbäck, chief of the director-general's staff, the computer is being used for "cryptography and information security."[11][12]