The National Research Council (NRC) is an agency of the Government of Canada which conducts scientific research and development.

The NRC was established in 1916 under the pressure of World War I to advise the government on matters of science and industrial research. In 1932, laboratories were built on Sussex Drive in Ottawa.

With the impetus of World War II, the NRC grew rapidly and for all practical purposes became a military science and weapons research organization. It undertook a number of important projects, which included participation with the United States and United Kingdom in the development of chemical and germ warfare agents, the explosive RDX, the proximity fuse, radar, and submarine detection techniques. A special branch known as the Examination Unit was involved with cryptology and the interception of enemy radio communications. The NRC was also engaged in atomic fission research at the Montreal Laboratory, then the Chalk River Laboratories Ontario.

Post-WWII, the NRC reverted to its pre-war civilian role and a number of wartime activities were spun off to newly formed organizations. Military research continued under a new organization, the Defence Research Board. Atomic research went to the newly created Atomic Energy of Canada Limited. Foreign signal intelligence gathering was passed on to the newly created Communications Research Establishment. During the 1950s, the medical research funding activities of the NRC were handed over to the newly formed Medical Research Council of Canada. Finally, on May 1, 1978, with the rapid post-war growth of Canadian universities the NRC's role in university research funding in the natural sciences was passed to the Natural Sciences and Engineering Research Council of Canada.

Under financial pressure in the 1980s, the federal government produced what popularly became known as the Neilson Report, which recommended across-the-board financial cuts to all federal government organizations, including the NRC. This led to staff and program cutbacks. Recovery was slow, but the NRC has managed to regain its status as Canada's single most important scientific and engineering research institution among many other Canadian government scientific research organizations.[citation needed]

Today, much of the NRC's focus is on developing partnerships with private and public-sector technology companies, both nationally and internationally. The Council will be celebrating its centenary in 2016.

Some of the many innovations by NRC personnel included the artificial pacemaker, development of canola (rapeseed) in the 1940s, the Crash Position Indicator in the 1950s, and the Cesium Beam atomic clock in the 1960s.

The NRC played a key role in the birth of computer animation, working with the National Film Board of Canada and animator Peter Foldès on the 1971 experimental film Metadata and the 1974 short film Hunger.[1][2]

More recently, the NRC has been highly influential in the field of audio. A great deal of research at the NRC has gone into the designs of many popular speakers from Canadian speaker manufacturers like Energy Loudspeakers and Paradigm Electronics. Some of their research has also influenced speaker designs around the world.

Agencies with special relationships with the NRC

Specialized agencies and services which have branched out of the NRC include:

The NRC reports yearly within the Treasury Board Secretariat's Results-Based Management Framework. The NRC is currently guided by a strategic plan for 2006-2011: Science at Work for Canada.[4]

Close to 4,000 people across Canada are employed by the NRC. In addition, the Council also employs guest workers from universities, companies, and public and private-sector organizations. [1]

An inscription at the front entrance of the NRC Sussex Drive Research Facility in Ottawa. 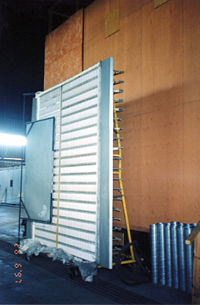 A radiant heat panel for precision testing of quantified energy exposures at the Institute for Research in Construction of the NRC, near Ottawa.

A fire house at the Institute for Research in Construction, used to provide information to aid building code and fire code development in Canada.

According to the Canadian Security Intelligence Service website, the NRC headquarters in Ottawa "was a prime espionage target" during the Cold War.[5]

The NRC has a fleet of aircraft for their research purposes:[6]

NRC and Its Institutes